Mercedes-AMG SLC43 to be launched on July 26 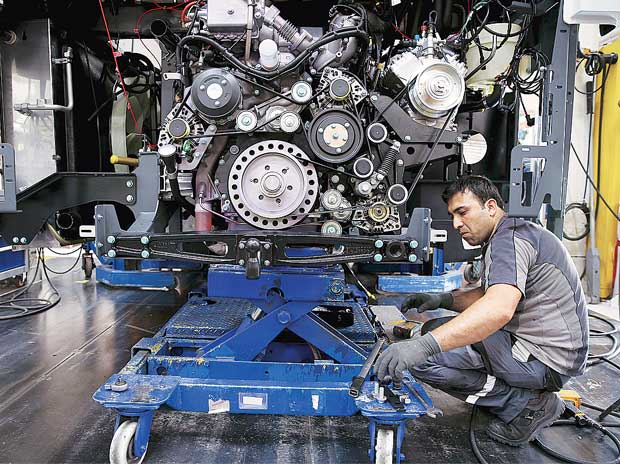 Automobile component companies could be major beneficiaries of the various pollution control measures expected to be implemented.

Be it the ongoing implementation of BS-IV emission requirements or the decision for BS-VI emission norms by 2020, the compulsion for an anti-lock braking system (ABS) in two-wheelers, safety features such as airbags in cars and the government’s plan to phase out older vehicles, all these will benefit auto component suppliers.

In addition to implementation of BS-IV norms from April 2017, two-wheelers segment will undergo mandatory use of ABS from April 2018. Analysts at ICRA estimate the market for ABS by 2020 for the segment at Rs 4,200-5,000 crore. Key beneficiaries would be Bosch, Continental and Brakes India, a TVS group company (the latter two are unlisted in India). This is the second segment, after trucks, where ABS was made compulsory for all commercial vehicles in FY16.

It is the compulsory installation of ABS in medium and heavy commercial vehicles (M&HCV) which have seen companies such as Wabco India come across investors’ radar. M&HCV sales are expected to grow 20 per cent in FY17, on the back of pre-buying ahead of implementation of BS-IV, as well as on pick-up in demand from the mining and road construction segments.

The other step to boost prospects of the M&HCV industry, both truck makers and suppliers, is the government’s plan to scrap commercial vehicles older than 15 years. Analysts at Kotak Institutional Equities estimate 13 per cent of M&HCVs are over 15 years and a third are between 10 and 15 years. The scrappage policy, they say, will benefit Wabco and Bharat Forge among the suppliers it tracks. Commercial vehicles are the biggest segments within the auto pie for both.

For Bharat Forge, it needs to be seen how the market views the company’s move to sell stake in a defence venture to its promoters, which CLSA said is a negative surprise. Notably, the company is also witnessing pressure in global markets, a big chunk of its revenue (in both automobile and non-auto segments). Ramakrishna Forgings is another company which could benefit, as most of its revenues come from the domestic M&HCV space. The new vehicle safety assessment programme takes effect from October 2017 for new models and October 2018/2019 for all existing models. It would entail airbags as a necessary addition to passenger vehicles. This is expected to open a market opportunity of up to Rs 2,300 crore by FY20 for airbag suppliers, mostly foreign (Autoliv, TRW, Takata, Toyoda Gosei), say ICRA Ratings analysts. Citing the strong growth prospects, some Indian component manufacturers have entered the space, they add. So, investors can keep an eye here.

The focus on safety measures could benefit Wabco as technologies such as lane departure warning, collision mitigation and electronic stability control systems come into play, increasing its revenue pie and content per vehicle.

Finally, the transition to BS-VI emission norms is a key trigger. Analysts at UBS say Bosch will benefit from the rise in demand for diesel fuel injection systems, with BS-IV implementation in FY18 and BS-VI from FY21. Additionally, the increased adoption of selective catalytic reduction from FY18 and exhaust gas treatment, crucial components to control emissions, is expected to emerge as a new revenue stream for the company.