Medium, heavy duty trucks sales down 20% in Nov after months of brisk pace 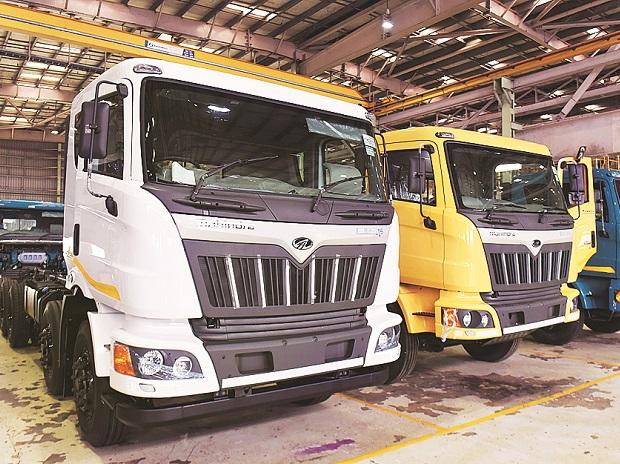 Sales of medium and heavy commercial vehicles (MHCV) for most of the manufacturers fell sharply in November after advancing at a brisk pace for over a year, reflecting a sluggishness in overall economy.


The drop in sales have come on the back of higher cost of borrowing, lesser load and reduced freights, which in turn have impacted transporter’s viability. Auto firms count dispatches to dealers as sales. Sales of medium and heavy duty trucks at Tata Motors fell 24 per cent to 9,793 units over a year ago period. The company attributed it to the decline in cargo sales as operators postponed their purchase due to low consumer sentiments. The addition of capacity in the parc with existing vehicles being registered for higher payload (increased axle load) also impacted sales, it said.

However, the tipper segment continued to grow strongly at 15 per cent over last November, and was relatively unaffected on the back of road construction, affordable housing, irrigation projects, and government spending on infrastructure projects, it said.


The pace of India's GDP growth slowed during the second quarter of 2018-19 to 7.1 per cent from 8.2 per cent in Q1, mainly for a drop in manufacturing. The output growth of India's eight major industries rose in October 2018 to 4.8 per cent from 4.3 per cent in September. But, on a year-on-year (YoY) basis, the expansion rate of Index of Eight Core Industries (ECI) was lower than the 5 per cent growth reported for October 2017.


"November 2018 was a challenging month for the industry due to low consumer sentiments as a result of liquidity tightening in the market, higher interest rates and rising fuel costs. In certain cases, small operators' profitability was impacted due to reduced freights on account of the benefits passed by large operators from the GST-related credit," said Girish Wagh, president, commercial vehicles business unit, Tata Motors, in a statement. Wagh expects to see a rebound in the coming months as the liquidity has started to ease and the fuel prices have got moderated with the reduction in global crude oil prices.

S P Singh, senior fellow at Indian Foundation of Transport Research and Training, said the current slowdown was on expected lines. “We saw this coming as there is lot of overcapacity in the market,” said Singh, pointing out that a drop of 5-6 per cent in cargo last month and fall in freight rates in the same proportion impacted truckers’ ability to pay off the loan.

He expects demand for new trucks to take a further hit in the current month as freight availability is unlikely to improve. Typically when the slowdown sets in, heavy duty is the first to fall, he said. Dispatches at others, including Ashok Leyland, Volvo Eicher Commercial Vehicles, also fell 18 per cent, 3 per cent and 20 per cent, respectively.

Despite the road bump credit rating agency, ICRA remains optimistic of the road ahead for commercial vehicles. Despite near-term challenges arising from liquidity crunch and declining profitability from fleet operators. ICRA has maintained a stable outlook for the commercial vehicle (CV) segment and expects it to grow between 18-20 per cent in volume terms during FY19 on the back of demand from infrastructure sector and core freight generating sectors, it said in a note on Monday.


It, however, said that following the liquidity crunch in the financial markets, the financing scenario is expected to get tightened which will adversely impact CV sales in the near-term.


The market has been very volatile and therefore it's difficult to draw a conclusion on one month's sales, Subrata Ray, senior group vice-president, ICRA told Business Standard, adding his firm was retaining its outlook on sector.