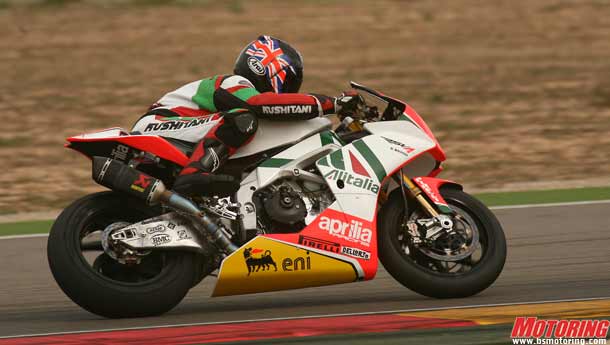 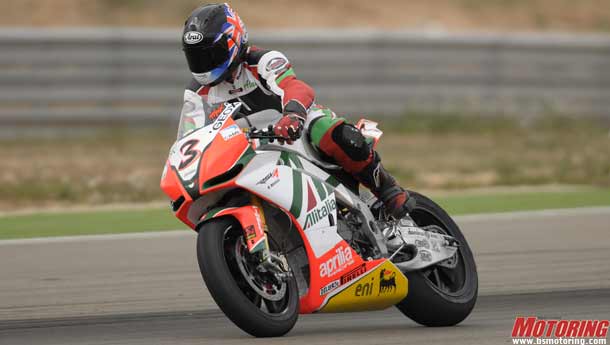 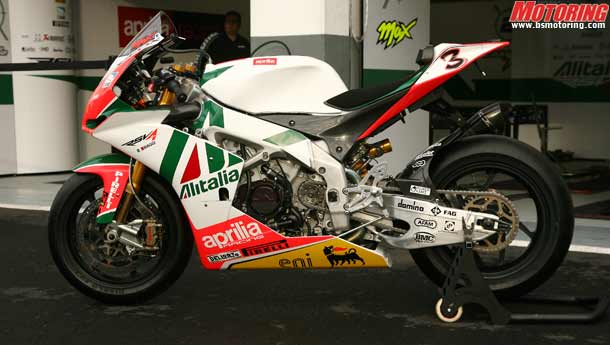 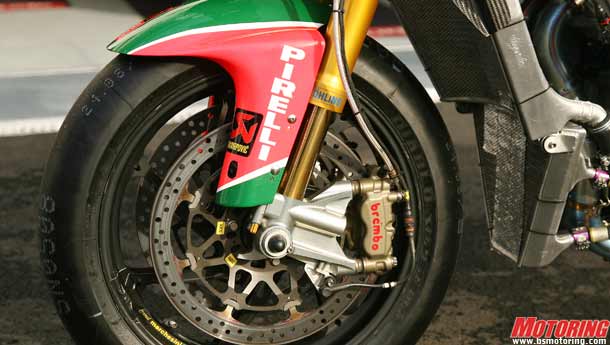 No doubt about it – Max Biaggi is a genuine superstar. He’s displayed skill and courage in gathering 42 Grand Prix race victories, four successive 250GP world titles and three runner-up slots in the 500cc/MotoGP World Championship. But maybe the bravest thing Il Corsaro (well, I guess he does look vaguely piratical, hence the nickname!) ever did was switching to the World Superbike Championship in 2007. In 2010, he’s gone and won the 2010 World Superbike Championship on the Aprilia RSV4. That merits kudos – but now, at age 39, Max has signed up for two more years to defend his title against all the young kids on the block. Respect!

The chance to ride the latest version of the Roman Emperor’s bike came at Spain’s Aragon GP circuit, a delightfully daunting new track I was to have the pleasure of learning from scratch in just a handful of laps aboard the world champion Aprilia! A couple of laps on a scooter in the gathering twilight the night before were enough to tell me this was A) a circuit to be treated with respect, with several blind turns carved into the rock of the hillside it’s located on, and B) the kilometre-long straight would let the Aprilia stretch its legs.

Just a single lap the next day was enough to convince me that in the intervening year, the Aprilia factory team have refined what was always a fast and ultra-effective motorcycle into a well deserved title winner. Straddling the Aprilia in pit lane while the factory race engineers plugged in a MotoGP-style starter to the right side of the bike, unlocking that glorious wall of sound from the large-diameter Akrapovic tubone pipe, as well as the unmistakeable rattle from the gear camdrive.

In spite of the Aprilia’s compact build, thanks to its physically unobtrusive 65º V4 motor, it felt surprisingly accommodating for a taller rider, perhaps because test rider Alex Hoffmann is the same height as me, making another reason the riding stance is so well packaged. With a high rear ride height putting quite a lot of body weight on your arms and wrists, the Aprilia’s riding stance was definitely more MotoGP than World Superbike – rather like the whole bike, and especially its engine performance, as some of its defeated rivals claim...

But riding the Aprilia at seven-tenths for the first couple of laps while I grappled with learning the circuit revealed a bike that’s more well-rounded and less hard-edged than a year ago, with still more low-down power to go with the meaty midrange and awesome top end that was always there.

The result is a 221 bhp bike that you could imagine riding to the shops – it’s so forgiving and tractable. Dropping down through Aragon’s equivalent of Laguna Seca’s Corkscrew, with the engine running as low as just 6,000 rpm while I groped my way through the blind downhill turn, then winding it progressively wide open as the track opened out, amply demonstrated this. But the long left-hander that comes next has a false apex in it, for which you must back off the throttle in third gear and once again, the Aprilia V4 engine let me get away with doing that, before accelerating hard again in third gear cranked right over to the left, with impressive grip from the 190-section rear Pirelli. What’s likely to be the most powerful engine on the SBK grid ran sweetly all the way to the 15,000 rpm limiter, at which point the electronic programme on the ride-by-wire throttle stops the engine from revving any higher. There’s no staccato cutout, no jerky hiccup – the Aprilia simply stops building revs and holds a constant engine speed, so however hard you keep twisting the throttle, 15,000 rpm is IT.

But unleash the motor down that long main straight and the Aprilia’s top-end performance is simply stunning and totally addictive, building strong and hard from just 8,000 rpm exiting the slow left-hander leading onto it, and as it runs cleanly and so irresistibly to that fifteen grand redline, you feel the engine pick up speed after the 11,000 rpm switchover point on the variable-intake system. First-gear pickup from a closed throttle is still pretty explosive, so it’s best left for getting off the mark. The tall Aragon gearing is good for 330 kph down the main straight, but the engine is still tractable enough to use second gear even out of slow hairpins with an uphill exit. But you don’t need to rev it right out to go places, as Max Biaggi himself confirmed to me. I short-shifted several times in the Aragon infield without seeing any lights flashing. For sure it seemed that the drive was even better out of a second-gear turn when I did that, presumably riding the torque curve to best advantage as I did so. But that leaves a massively wide spread of power, doubtless thanks mainly to that variable intake system.

The Aprilia RSV4 is one of the most distinctive-sounding Superbikes yet made, its V4 motor issuing an ultra-distinctive meaty burble at low revs which transforms itself into a gruff howl at high rpm – it sounds like a high-pitched twin low down, but a deep-voiced four up high. The RSV4 offers the best of both worlds and very little of the worst, as between a four and a twin, it has a high-revving multi’s total horsepower numbers, coupled with the meaty drive and fat torque curve of a twin as well as nimble handling. Once I’d persuaded myself that I knew Aragon well enough to ride Max’s missile in something approaching anger, it allowed me to use lots of turn speed in the second- and third-gear corners that are aplenty at Aragon. Once you’ve convinced yourself to use a gear higher than you originally want to, you surf the torque curve of that remarkable engine while revelling in the fluid throttle response. Simply magic.

So too is the thrilling thrust of acceleration that the RSV4 delivers out of a corner once you switch the power back on, with the traction control developed on Marco Simoncelli’s 2008 World champion Gilera RSA250 just imperceptibly restraining the V4 engine’s power delivery as you work the throttle in pursuit of grip. It’s an addictive, effective performance package which sees the power delivered to the ground seemingly effortlessly – except there’s so much of it, you better pay attention! Too bad I didn’t get enough time on the Superbike to start experimenting with the Aprilia Racing ECU’s traction control programme via the two buttons with six levels of intervention, varying from Level Six (hardly any control) to Level One (lots of it).

But I could take full advantage of the engine braking control programme, standing on the brakes for the second-gear left after the pits, then just kicking down a trio of gears without ever using the clutch as I leant on the fabulous Brembo Monobloc radial brakes to throw off speed, while the ECU took care of matching revs to ground speed. Having been alerted by Max to watch out for it, I noticed there was more engine braking from the Aprilia this year than last – though I must admit I got too eager at that Turn One starting my final lap and ran in a little too deep and missed the apex. But at the end of the longer main straight I finally got it right, managing to hold off the brakes until just before the 200-metre board, then stepping the gear lever down to second as I squeezed hard on the brake lever. I felt my forearms pumping under the serious weight transfer of my 83 kg (yes, I know, but I’m trying to start exercising again now that my broken leg has healed, so give us a chance!) as I tipped it neatly into the apex of the left-hand hairpin, the Aprilia steering so controllably into the turn from high speed. OK, that was one lap – now imagine doing it another 23 times!

But where the ultra-compact Aprilia really scores compared to any other four-cylinder Superbike is the way it steers and changes direction from side to side as easily as a 600 Supersport, making this a less tiring bike to race than other bulkier in–line fours. And the combination of the ECU’s variable idle-speed programme and the mechanical slipper clutch worked ideally when slowing the bike down hard on the brakes, while at the other side of the bend the factory Superbike’s flawless anti-wheelie control kept the front wheel just threatening to start hovering above the ground when I pulled the trigger out of any slow turn – but without actually doing so.

I’ve been fortunate enough to ride almost every single factory Superbike in each of the past 20 years, but Max Biaggi’s Aprilia RSV4 world champion is, by some way, the most refined and potent such bike I’ve ever tested. I’m not surprised it won the World title this season and it’ll be favourite to do so again in 2011 – although teammate Leon Camier and dark horse Nori Haga on an identical bike run by the DFX/Borciani team, may give Max a run for his money. With the Biaggi Replica that Aprilia are now making a small batch of, the benefits of the R&D which brought two world titles to the ultra-professional but warm Italian team is available to filter down to national-level Superbike teams or even fortunate – and well-heeled – track day customers. Wish my lottery ticket would come in!