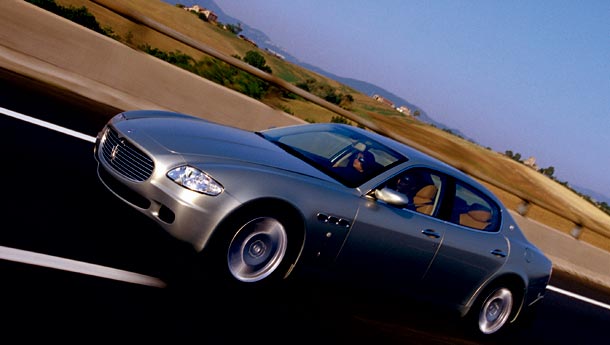 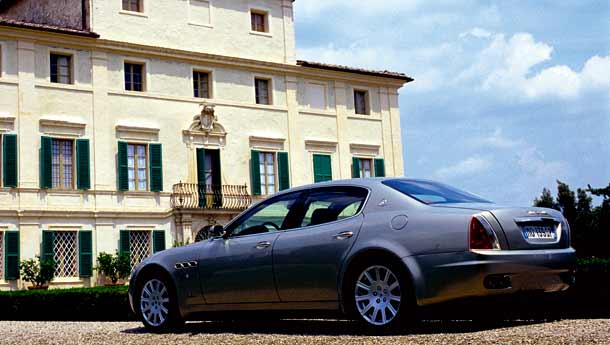 Okay, say it. Roll the word around your tongue like you would with some vintage Chianti. Savour it. Quattroporte. Satisfyingly Italian, isn’t it? Like Sophia Loren or Gina Lollobrigida. Or even Pollo Arrosto, or Agli ‘o’ Lio Pepperonchino. There’s something about Italian names that makes the commonplace sound exotic. Remember the Ferrari Testarossa? Now imagine saying Ferrari Redhead. The magic just isn’t there. Which is why Maserati Fourdoor wouldn’t work. Four door, you see, is exactly what Quattroporte means.

This year, Mercedes, BMW, and Lexus have been given an Italian warning. And surprisingly enough, it’s from Maserati, who haven’t had a serious contender in the upper-crust luxury sedan segment for quite a while now. Not that this is the first Quattroporte of course. The first one came out way back in 1963, was powered by a handbuilt V8 and combined GT-style handling and performance, with sky-high levels elegance and luxury. Subsequent four door Masers weren’t as successful as the first Quattroporte and production of the last-generation Quattroporte was stopped in early 2001, but this fifth-generation car looks all set to change that.

The new Q has been designed by Pininfarina (Italdesign Giugiaro also bid for the job but didn’t get it) and looks impressive. Which is just as well, for Maserati spent in excess of US$ 250 million (not counting the money spent in revamping their Modena factory, where the Quattroporte will be built) in developing this car. About as long as a BMW 745i, the Quattroporte has undeniable presence. There are some references to retro Maserati design cues – that protruding oval grille, the bulging bonnet, the air-vents on the front flanks... But overall, it looks like the thoroughly contemporary luxury sedan it is. While the French have gone overboard with their eccentricity – witness the massively ugly and pointless Renault Vel Satis, and the Germans are going down the weird route, with all Bangle-BMWs, the Porsche Cayenne and the Mercedes SLR, Maserati have simply done the old-fashioned thing and made a beautiful-looking car. Beautiful and muscular, that is. Under the hood, there’s a 4244cc, 400-horsepower, all-aluminium, DOHC V8 which also powers the Maserati 4200 Spyder and Coupe. It’s rumoured that the Quattroporte can accelerate from 0 to 100 kph in less than 6 seconds and that could well be true.Transmission is high-tech.   For now, Maserati’s clutchless 6-speed DuoSelect auto/manual hybrid gearbox is the only option. This can be left in full auto mode, or shifts can be made manually via steering-wheel-mounted paddles, in proper F1-style. Traditionalists are of the opinion that Maserati should have also offered a conventional 6-speed automatic for a luxury car like the Quattroporte, but perhaps that will follow in the months to come. According to Roberto Corradi, technical director of Maserati, the company’s aim was to duplicate the driving dynamics of BMW’s M5 and the 7-series’ features and ride comfort for the Quattroporte. That would be a tall order for any manufacturer, but Maserati just might have pulled it off. The ride is constantly adjustable. Maserati’s ‘Skyhook’ adaptive damping system monitors acceleration, speed and braking parameters and adjusts shock-absorber characteristics in accordance with the mode (Normal or Sport) you’ve chosen. And there is the expected complement of 4-wheel disc-brakes, ABS and traction control which make the car as safe as possible.

Inside the Q’s cabin, you find the best wood, metal and leather trim there is. The leather is extra-soft Poltrona Frau and you can choose between rosewood, mahogany and burl walnut trim. Oh, there are also 13 choices for the kind of stitching you want on your leather seats, 3 kinds of roof linings and 4 kinds of floor mats. There’s a Bosch-Blaupunkt Multimedia system (not half as complicated as BMW’s i-Drive but just as capable), a Bose sound system, DVD player and ‘intelligent’ seats which offer adaptive padding, heating, ventilation and massage.

You would expect such a car to be very, very expensive and when it goes on sale in August/ September this year, the Quattroporte is likely to cost about Rs 50 lakh. That’s in the US. If you want to bring one here, add import duties and other levies. Still want to buy one? Well, you can’t. At least for one full year. Simply because the first year’s production is already spoken for. By 2008, Maserati want to start selling 10,000 cars annually. This year alone, with the new Quattroporte ready to roll, they want to sell at least 5,000 cars. Shouldn’t be difficult. It may be expensive, but the Q is an incomparable slice of luxurious, sporty Italian motoring which has few peers anywhere in the world.