The country’s largest carmaker, Maruti Suzuki India, will not be launching an electric vehicle (EV) anytime in the foreseeable future, as issues like range anxiety and the high cost of acquisition will put off buyers, Kenichi Ayukawa, its managing director and chief executive, told Business Standard.

Maruti has decided to put its EV plans on the back burner even as most other passenger vehicle makers such as Tata Motors, Mahindra & Mahindra, Renault India, MG Motors, and Kia Motors are going full throttle with their plans, nudged by the government’s policy push.

Maruti will instead focus on other alternative technologies, including compressed natural gas (CNG) and hybrid, to reduce the overall carbon footprint to meet advance emission norms.

“This is not a good time to bring an electric vehicle to the Indian market. Looking at market conditions and customer expectations, we will decide,” said Ayukawa. Considering the fact that the government doesn’t support subsidy for personal EVs, Maruti will have to “examine ways to provide an affordable electric product in the personal space”, he added.

“There is no parking space or charging space. Infrastructure hasn’t developed at all. Under these conditions, it is very difficult to make a business case. Only limited people are interested,” said Ayukawa. 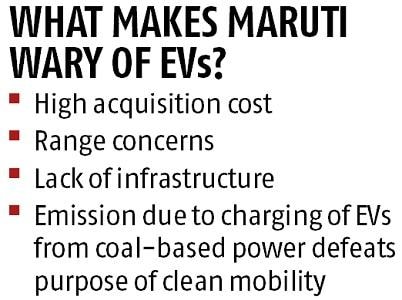 A hybrid can be a stepping stone towards electric mobility till an ecosystem for the latter evolves, he pointed out.


Ayukawa’s counterparts think otherwise. “I don’t think we can ask for more from the government. The onus is no longer on the government, it’s on us,” said Pawan Goenka, managing director at Mahindra & Mahindra, referring to the policy measures taken and incentives doled out by the government.


Tata Motors, too, has stepped on the gas. The company plans to have half a dozen EVs in its portfolio over the next two to three years. It has taken up the mission “to be ahead in terms of EV technology”, Tata Motors President (electric mobility business) Shailesh Chandra said.


To avail of the benefits and make EVs financially viable, Mahindra has taken a strategic call to focus more on the shared mobility space. At the 15th edition of the Auto Expo, which got underway at Greater Noida on Wednesday, EVs took the centre stage at most of the pavilions. Automobile makers unveiled over a dozen EVs, including ready-to-launch models and concepts. Even new entrants from China, including FAW and Great Wall Motors, plan to have EVs as their centrepiece. At the Auto Expo, the company showcased a concept EV car, electric three-wheelers and a prototype four-wheeler called Atom.


The government is banking on EVs to reduce the dependency on fossil fuel and curb emissions in a country which is home to the world’s most polluted cities. Over the last couple of years, it has introduced a raft of policy measures and incentives to promote EVs under the FAME scheme. Last year, it reduced the goods and services tax on EVs to 5 per cent from 15 per cent and also announced income-tax benefits for the buyers. All the sops, however, are directed at the commercial segment.


Elaborating on the reasons for Maruti going against the trend, C V Raman, executive director (design and engineering) at Maruti, said, “Volumes are not motivating enough. Price point where Maruti operates is where the volume is.”


The company strongly believes in bringing affordable products and so far, the cost dynamics of EVs is not working. If the price of the internal combustion engine vehicle is Rs 5-6 lakh, the EV version becomes almost double of that. The high cost makes it unviable, he added.