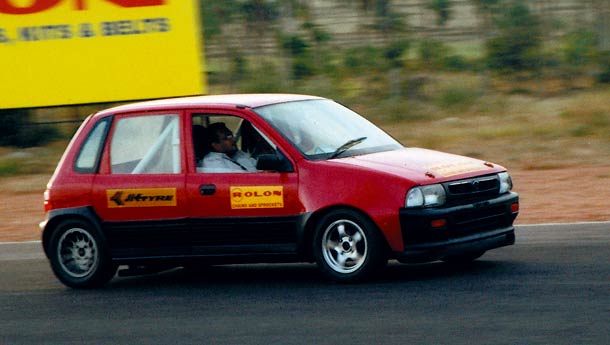 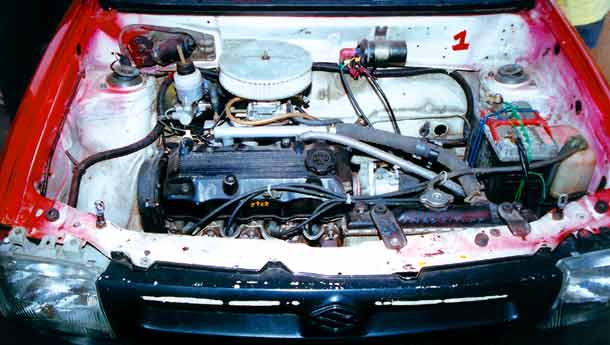 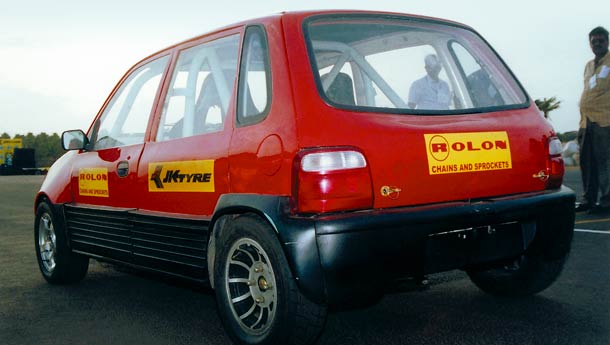 Last month, when I tested the ‘new’ Esteem, the one thing I kept saying was how much I love its 1300cc engine, and how I wish Maruti saw it fit to offer that engine in a two-door Zen. Now that would be a hot hatch. And it is. Talk about wish fulfilment. Motoring had been invited to Coimbatore for the Asian Karting Championship and after all the racing was done, the organisers agreed to let me have a go on the track – in one of their 1300cc racing Zens. Yes!


As you’d see in the pictures, the little Zen looks like it means business. With its bulging flanks, flared wheelarches, black side cladding, lowered suspension and front spoiler, it’s an angry looking car. Inside, the car has been completely stripped of anything and everything which doesn’t help it go faster. Bare metal everywhere, a roll-cage, two racing seats, a small, chunky steering wheel and a rev-counter. That’s it. There’s little finesse here – it’s a bare-knuckled streetfighter. And the gruff, metallic rasping of the exhaust only adds to that impression.   Akbar Ebrahim asked me if I’d ever driven on the Kari Motor Speedway before this. I hadn’t, so he sent pro-racer and Kari Speedway expert, Sarosh Hataria, to ‘just show him around the track.’ Well, show me around he did – in spectacular style – to the point where I was almost scared he might flip the car around one of the Speedway’s tight bends. He didn’t, of course. In fact, Sarosh was totally nonchalant as he tore around the circuit, swapping cogs, keeping the engine on the boil. And then it was my turn. Now since there was no way I was going to be able to ‘learn’ the track in the half-dozen laps I’d been allowed, I was going to concentrate on having fun, and not on trying to match Mr Hataria’s blistering pace. Which I wouldn’t have been able to do anyway, even if I had known the track extremely well.

Strapped in and ready to go, I blipped the throttle a few times and the Zen responded with a series of angry barks. Okay, here we go. Stepping off the line, the car picked up speed with remarkable alacrity. The old Esteem engine (no fuel injection) has, I am told, been tuned to produce 88 horsepower, which is entertaining in a light, stripped-bare hatchback. The Zen dispatched with the start/finish straight in what seemed like a scant few seconds, and it was time to shift down to second, for the first right-hander. I tried to brake as late as I dared, but the Zen’s stoppers didn’t seem to be bothered at all. And the fat, 185/60 rubber on the car’s 13-inch alloys seemed perfectly capable of handling about twice the cornering speeds I was throwing at them.   Anyway, the car flicked through the next four corners (turn-in being noticeably quicker than a stock Zen, what with this car’s modified suspension geometry) without incident, but then I got into trouble at the sixth one – a fast, 90-degree right-hander. Went in too hot, got on the brakes too late, panicked, braked mid-corner and almost spun off the track. Lots of arm twirling on the steering wheel and some jabs on the brake pedal saved the situation somehow. No actually, more than me, it was probably the car that saved the day. After that, it was have-fun-but take-it-easy for the next few laps.

My misadventures on the track notwithstanding, the 1300cc Zen turned out to huge fun. On the tight, 2.1 km Kari Motor Speedway, the 88 bhp, 1300cc Esteem motor provided the cheap thrills I was looking for. The Palio 1.6 GTX might boast a 1600cc engine and 100 bhp, but this Zen would be so much more fun on the road. Maruti, please take a batch of two-door Zens (the Carbon would be just perfect), fit tuned, fuel-injected, 1300cc engines into those cars, fit some big alloys and fat, tubeless tyres and disc brakes on all four wheels – and you’ll have the most rocking hot hatch in the country. Come on, build this car.