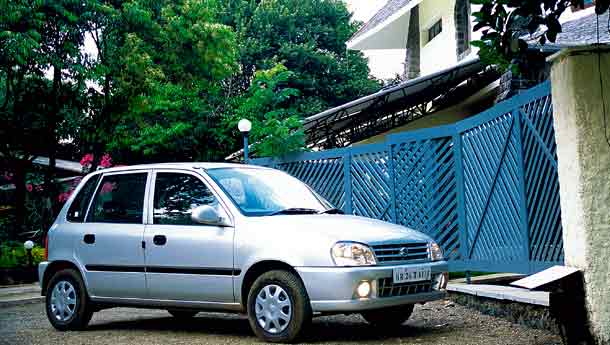 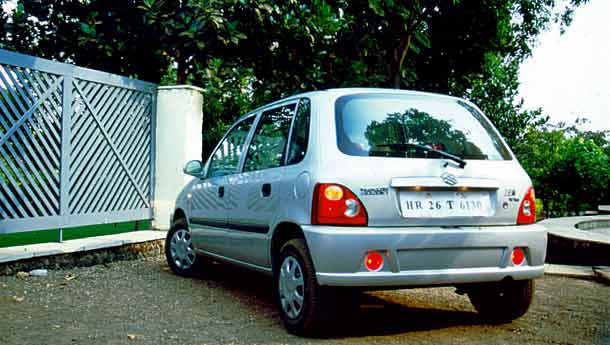 For more than a decade now, the Maruti Zen has represented motoring nirvana for the Indian masses. I suppose it is the only other Maruti which has come anywhere close to emulating the tireless 800’s phenomenal success. In the face of newer, fresher cars from the competition, the Zen was beginning to look a bit tired, but since it would never do for Maruti Suzuki to stop making one of their largest-selling cars, they’ve given it a proper cosmetic makeover instead. Good thing too, for it would’ve been a sad thing to let the Zen go. Personally, I’ve always liked the nifty little number – it’s as nimble as a rat scurrying around in a house full of cats, has a swift and precise gearshift (better than the Wagon R’s and the Alto’s), and despite its age, the car’s all-aluminium 59 bhp MPI engine doesn’t bore you to death, even on out of town drives. Maruti also made limited numbers of sportier two-door derivatives – the Carbon and Steel, which don’t go any faster than the stock car, but are great fun to look at and sit in. Whatever way you look at it, the Zen’s overall feel has always been one of verve, light weight, reliability and yes, fuel economy too. So have things changed with the new Zen?

Unlike the Wagon R, which has also been given a facelift recently, the new Zen really does look different from the old one. The most noticeable restyled bits are the front and rear bumpers, front grille, clear-lens headlamps and foglamps front and rear.The bonnet and the hatch are also new. Initially, I was a bit undecided about the new styling. At the front, the car definitely does look more handsome than before. At the back, things look a bit more... um, aftermarket. The rear number plate has been moved up to the hatch from the bumper and the tail-lamps are also new. The effect is, ultimately, pleasant enough. The car looks sportier, and when viewed from the back, slightly more compact than the old Zen (actually, exterior dimensions remain unchanged from the old car).

Inside too, things have been spruced up a bit. Instrument dial faces are a sporty new white now – still no rev counter though, and the leather-clad gearlever has a sliver of plastic-chrome atop it. The steering wheel is also clad in leather, while seats get cloth upholstery. There are no painted metal surfaces visible inside the cabin, and while there’s still lots of drab, grey plastic in there, at least there are no rough edges anywhere. It’s undeniably 1990s – very much so – and though I prefer the Zen’s facia to the Alto’s or the Wagon R’s, this is one area where I wish Maruti had put in more effort. With the Santro Xing, Hyundai have done a more substantial revamp for the top of the line variant’s interiors, and a similar revamp for the Zen’s innards wouldn’t have gone amiss. And yes, elbow-room for front seat passengers is limited as ever, and don’t even think of putting any more than two passengers in the back seat.   The new Zen’s ride is the same as ever – fairly comfortable in a basic, small hatchback way, but don’t expect the kind of compliance you get in a Palio, or even an Indica. The suspension tries its best to isolate occupants from bumps and potholes, but hey, remember, it’s a small car. Even after all these years, the engine still feels adequately powerful, but how I wish Maruti had shoehorned the Esteem’s 1300cc unit in here. Hell, if Fiat can do a 100 bhp Palio 1.6 GTX, why not a special edition 85 bhp Zen GTi? Give it nice, big alloys, a sports exhaust system, four wheel disc brakes and uprated suspension. Make this car, and I promise you, I’ll buy the thing right away. And so will thousands of other performance car enthusiasts all over the country. And while you are at it, please give the steering some more ‘feel’, because this electric power steering is very convenient in city traffic, but a tad vague at high speeds, especially coupled with the ride-improving, high-profile 145/80 tyres all round. Brakes, again, are adequate for the car’s capabilities. Handling is a bit nervous – the car doesn’t feel planted at higher speeds, but if you are sensible, it’s still a package you can throw around a bit, spin the wheels, have some fun...

So where exactly are we, with the new Zen? Well, I think it’s quite a cool package. I like the new styling and the car looks better than either the Alto or the Wagon R. The work was all done in-house by Maruti (even most of the dies and tools have been manufactured right here in India), which is a first for any Indian manufacturer, and is pretty commendable. The Zen’s performance is adequate in all areas, and that includes fuel economy – we got about 14 kpl during mixed – city and highway – usage, which is not too bad. Base model costs Rs 3.50 lakh, going up to Rs 4.10 lakh (ex-showroom, Mumbai) for the VXi version. The sweet spot, for most people, would probably be the Rs 3.80 lakh LXi version, while those who want an automatic should be ready to shell out close to Rs 5 lakh. In the meanwhile, I’ll keep hoping for that two-door Zen 1.3 GTi to happen.