Maruti to launch Ertiga to take on Toyota's Innova 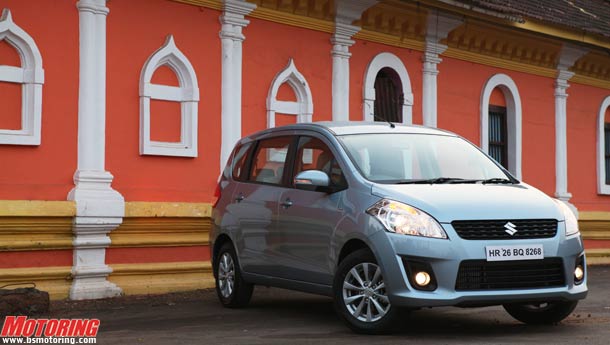 The country’s largest car maker, Maruti Suzuki India Ltd, is set to challenge the dominance of the Toyota Innova with the launch of Ertiga, a multi-utility vehicle (MUV), later this week.

The company, which has negligible presence in the fast growing MUV space, with the Gypsy and Grand Vitara, is looking at selling 4,000-5,000 units of the new vehicle in the first month of launch. Additionally, Maruti Suzuki has finalised plans to assemble the multi-purpose vehicle in Indonesia from completely knocked down kits, starting at the end of this month.

Shashank Srivastava, chief general manager (sales & marketing), Maruti Suzuki, said: “MUVs today account for 14 per cent of the passenger vehicle market in India. The category has registered a compounded annual growth rate of 25 per cent over three years. With the Ertiga, we want to create a new segment of compact MUVs, which can meet the requirements of customers for both personal and commercial use. It will complete the portfolio of products we have on offer in India.”

The Ertiga would be made at the company’s facility in Gurgaon, Haryana. Maruti Suzuki has invested close to Rs 430 crore in developing the vehicle. Srivastava declined to specify the price of the new vehicle. Industry sources believe it is likely to be Rs 6-7 lakh.

Data with the Society of Indian Automobile Manufacturers show 326,824 utility vehicles were sold in the domestic market between April and February in 2011-12. Around 65 per cent came from MUVs, such as the Toyota Innova and Mahindra Xylo. The remaining volumes filtered in from offtake of sports utility vehicles like the Ford Endeavour, Hyundai Santa Fe, Toyota Fortuner and Honda CR-V, tagged at close to Rs 20 lakh each.

At present, the Innova is the largest selling MUV, with average monthly volumes of around 5,000 units. BS Motoring listed the vehicle among the five MUVs that changed the game. Since its launch in 2005, Toyota has sold 328,000 units of the Innova in the country. The vehicle is priced between Rs 8.89 lakh and Rs 13.58 lakh. Competitor Mahindra Xylo is priced upwards of Rs 7.33 lakh (ex-showroom, Delhi). Both come equipped with 2.5-litre diesel engines.

The Ertiga would be available in both petrol and diesel versions. While the former variant would be equipped with the new 1.4-litre, K-series engine and deliver 16.02 km per litre, the diesel model would be strapped with the 1.3-litre engine the company sources under a technological licence with Fiat. The company claims the diesel variant gives 20.77 kmpl.

Interestingly, Toyota was the first car maker that looked at tapping this niche MUV segment in the country, with a model below its own best-selling Innova two years earlier. However, production capacity constraints and a focus on launching the Etios range of compact cars kept these plans on the backburner. Rivals are already making a beeline after Maruti Suzuki to tap the segment, with planned launches, including the Enjoy from General Motors and EcoSport from the Ford fold. Reports suggest Toyota may also look at introducing a similar vehicle, based on the Etios platform.