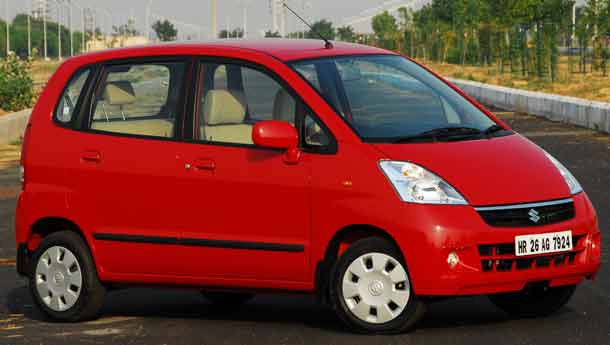 The big news is not that Maruti Udyog has introduced the all-new Zen Estilo, but the fact that they have actually retired the old one. Little Marutis started populating our country way back in 1984, and since
then, all cars that the nation’s carmaker introduced still live on in one form or the other. But now, the evergreen Zen gets the dubious distinction of being the first ever Maruti to officially go out of production. Not a fate that the doughty Zen deserved, after over 13 years of thrilling enthusiasts.

Replacing it is this, the new Zen Estilo. Adding that Estilo tag to the hallowed Zen brandname might have just saved Maruti Suzuki’s skin. I can imagine hordes of Zen lovers banging on the gates of MUL’s Gurgaon plant demanding that the Zen tag be removed from the new car – how can you call this the new Zen – it’s just a funky Wagon R! The original Zen was a snappy, honest, fun-to-drive number, but this looks like one of those preening, self-conscious kind of cars that are indifferent to drive...

I would have been among those angry fans myself, because these were the thoughts that were going through my mind as I laid my eyes on the Zen Estilo for the first time. I had seen this car in its Suzuki MR-Wagon guise in various motor shows but never thought that it would take this long for it to be launched in the country.

MR-Wagon?
Yes, Suzuki made this little runabout for the Japanese market between 2001 and 2005, but that had a smaller 660cc powerplant and differed in a few details. Now that it’s stopped production in Japan, MUL got the dyes and the rest of the aggregates of the car (hopefully for cheap) from Suzuki, fitted it with the Wagon R powertrain, gave it a few design changes, and bingo!, there you have it, the new Zen Estilo. Of course I have oversimplified it here, as the development process of the Zen Estilo took 18 months till it was signed off for production. During that period Maruti engineers and designers worked with those from Suzuki, giving it that smiling, chrome-trimmed visage and sporty grille/air-dam treatment, completely reworking the interiors, shoehorning the bigger drivetrain and making it suitable for driving in India (you know, LOUD horn, EXTRA ground clearance, STRONGER suspension components...). Which begs the bigger question: is it as much fun as the original? Just coming to that.

Sitting inside the Zen Estilo, you know that this is not the Zen. In the first place, it’s a not-so-tall tall-boy, fitting neatly between the Alto and the Wagon R. Which means that there is tremendous headroom. The thick A-pillar and the quarter glass means that this is a modern, contemporary car, all-right. Getting inside also is easy, no bended knees/folded hands, etc. And the interior dash treatment is modern. It has that trendy dual-tone treatment, and while the instrumentation is familiar to anybody who’s driven a Maruti, it is better laid-out. There are useful nooks and crannies to store stuff too.

The shoulder room is just about adequate, but tough if you’re generous with your helpings at the dining table. And don’t blame me if you feel your co-passenger’s knee every time you’re in first gear. Fire up the engine and it’s deja vu all over. The 1061cc 16-valve four-cylinder motor that develops 64 bhp at 6200 revs and 8.5 kgm of torque at 3500 rpm is to me the best small displacement engine around. It develops adequate power, but the way it delivers it is great fun. The motor is rev happy, in fact, it’s like a Suzuki motorcycle, effortlessly going beyond 6000 revs. And it’s a proven motor too, having done sterling service for quite some time now, under the Wagon R’s bonnet, and once upon a time, even under the Alto’s hood. Best of all, it’s fuel efficient too. The five-speed manual gearbox that’s paired with this engine does a great job of making the car driveable, but the long throws plus rubbery shifts mar the overall package. Hey, but it’s not unique to the Zen Estilo – it’s an issue with the Wagon R as well. The gearshift quality also does not go well with the sporty Zen image nor the smooth exterior design of the Estilo. But the gearing is spot-on, which is why Maruti had kept the whole drivetrain unchanged. Second gear takes you to 80 kph, while third tops out at 120 kph. What that allows you is an easy flexibility between second and third which is what you’ll end up doing on our city streets.

The Zen Estilo manages a 0 to 60 kph timing of 6.16 seconds and manages to hit 100 kph in 16.26 seconds. Which is marginally better than what the boxy Wagon R manages.The Alto, Wagon R and the Zen Estilo are spun off the same platform. Which again means a proven underpinnings package that has done sterling service in the country. The suspension package on offer – McPherson struts at front and three-link rigid and isolated trailing arm at the rear – can surprisingly take a great amount of abuse, so expecting the Zen Estilo to take the rough with the smooth won’t be asking too much. The Estilo’s ride is pretty good for a car of its class and is not unduly harsh. Handling is also well-sorted and surefooted, but it’s the tall-boy structure that does not allow you to corner the way the Zen used to do. And here is where the biggest issue between the predecessor and successor is: the Zen was a brilliant corner carver, while you are isolated from the experience in the Estilo – the new car is perfectly capable, it’s just that understandably, the thrills are missing. The electronic power steering once again takes away any semblance of feedback.

So to answer the question: it’s not as much fun as the original. Still, since all things must come to pass, we have to accept that the Zen Estilo is the car for here and now. And taken by itself, it’s quite a good machine too – a clever little car that marries the convenience of the Wagon R with funky styling and contemporary architecture. The pricing too, beginning at Rs 3.3 lakh ex-showroom Mumbai for the entry level LX version and going up to Rs 3.9 lakh for the VXi is no doubt reasonable. The only issue that rankles is the Zen tag – if it’s being positioned as a trendy, young person’s car, just the Estilo brand should have been fine. But the Zen brand, as a survey once pointed out, was stronger than Maruti – too much of a good thing to let go, I guess. Still, to me, it’s not the Zen for the 21st century.