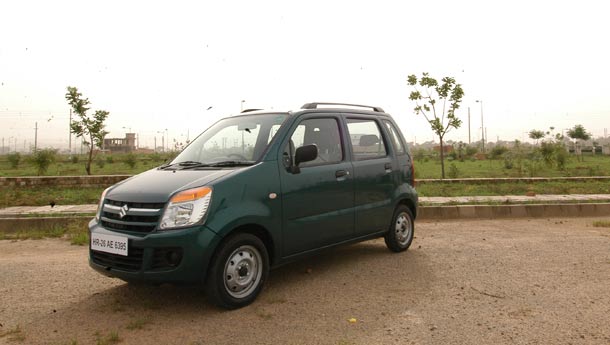 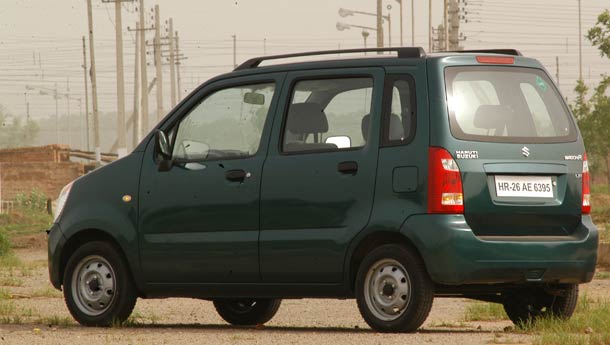 When I could muster Rs 30,000 together some ten years back, I bought myself a Fiat. A Premier President, to be more precise. It had bucket seats, floor shift, a nice music system and a coolant system for the radiator. I spent far more money over the next two years before my company gave me a Maruti 800 and I decided to send my beautiful Fiat to my uncle. The next time I visited him, I saw the car running on LPG. As in, it had a cooking gas cylinder secured in its boot and an Italian conversion kit under its bonnet. When my uncle wanted to run it on petrol, he could do it by simply tapping a switch on the dashboard. Every time he wanted to do a 120 km round trip, he would take the gas cylinder from the kitchen (and at times, from the neighbours too) and then hit the road. As for questions on safety, as most authoritative uncles do, he waved me off.

Welcome to 14 July 2006. Here I  am at Manesar, near the Maruti Suzuki plant at Gurgaon, driving a dripping wet, facelifted Wagon R which runs on petrol and LPG. So what took so long for car companies to launch an LPG version? My uncle knew that it was roughly 30 per cent cheaper than running on petrol and that is exactly why he spent Rs 20,000 on a conversion kit in a car that was by then worth much less than that. Well, to begin using cooking gas cylinders on cars was not the most legal or safe way to go about doing things, but pumps dispensing LPG were a rare phenomenon. Today, 32 cities in India are blessed with fuel stations that can supply LPG and hence the  Wagon R Duo.

As for the Wagon R facelift, I have a mixed response. I sincerely believe in the minimalist school when it comes to small cars, and the original Wagon R, in my eyes, was a smashing looking machine. Even the first facelift managed not to dilute the simple lines but provided a bit of glamour to a tiring workhorse. But what we have now is a little monster with a gaping grille and one that is all set to feed on all the dragonflies the neighbourhood fields can produce. Seriously, the new grille could give the Chevrolet Silverado a complex. The new airdam and bumper emphasise the mini-SUV theme further. The new taillamps are certainly inspired by the Mercedes-Benz A-Class, which is not a negative in any way. Also changed is the rear windscreen – which improves rear visibility. To be fair on the young designers at Maruti who did this job, they have certainly succeeded in stirring some interest in the car but they should also be prepared to take some criticism.   Inside, the changes are minimal – though the new steering wheel looks way more sportier, especially in the top-end models. What Maruti Suzuki needs to seriously take care of is the quality of bits and pieces that is going in. While the plastic surfacing cannot be termed bad yet, it is dangerously close to that. All-new rear-view mirrors that can be adjusted electrically from inside, new dials with blue lighting and more supportive seats complete the revamp. Since the powertrain has not changed in the petrol version, let us concentrate on driving the Duo.

To begin with, you can start the car in either petrol or LPG mode and you can switchover either way while on the move, as long as you give some revs while are flicking the switch (the engine will die on you otherwise). There is certainly a perceptible loss in power in LPG mode as well as when the car is running on petrol compared to the petrol-only Wagon R. This is because the Duo’s fuel injection system is calibrated for LPG and the car had to meet emission norms in both modes. Those who are used to the free revving 1.1 litre motor of the Wagon R may get taken aback by the Duo engine which tends to wheeze its way to producing some power. Nothing to worry about here, since the gas-air mixer makes a certain induction noise which makes you think that the car is running without oil. While acceleration from standstill is not an issue, overtaking (80 to 120 kph) will now be an arduous task that challenges your ability to take risks. That said, the Duo has enough and more pep to handle city speeds and with the footprint of the Wagon R being what it is, it will be a dream car for metros.

Unfortunately Maruti Suzuki has not offered the Duo with ABS and airbags but they are considering offering them as an option. The ultra-safe LPG tank (it is imported from Poland) now rests where the spare tyre used to be and the spare is now mounted at an angle, off-set to the left. That leaves just enough room for a suitcase or a large-ish soft-bag.If driven carefully, the LPG car can return the equivalent of 17-20 kpl on a regular basis according to Maruti Suzuki engineers. That makes it cheaper than a diesel powered car to run! And expect a ten per cent premium on the price of the car (we don’t know the list price as we go to press). More than anything else, it is great to see the largest carmaker in India boldly launching a car with a factory-fitted LPG kit on a proper passenger car (they got the experience from the scores of LPG-powered Omnis that infest the taxi business). Now the competition has no option but to follow them.

Will my uncle approve? The last I heard, he has sold the Fiat to some unsuspecting character and that means Maruti Suzuki has one ready buyer.