If you were among the lucky few who got subscription to and have held on to this stock, you would now be sitting on a whooping near 8,000% return. Back in 2003, the government divested 25 per cent stake in Maruti Suzuki Limited (Maruti Udyog Limited as it was known then) at Rs 125 per share. The stock debuted on the exchanges on July 09, 2003 and ended the first trading at Rs 164 levels, nearly 32 per cent higher than the issue price.


And if analysts are to be believed, the stock still has miles to go.

Incorporated in 1981 under the Companies Act, 1956, the government shortlisted Suzuki Motor Corporation as the joint venture partner for MUL. It was in 1983 that the India's first affordable car, Maruti 800, a 796 cc hatch back was launched as the company went into production in a record time of 13 months.

Also Read: 5 stocks contribute over half of Sensex's market-cap gain in 2017 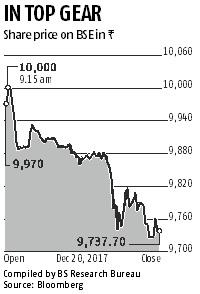 "The rise in fortunes of Maruti is a classic example of the consumption boom in India over the years. The company has been able to corner a healthy market share over the years. There is not much competition in sight. Their product mix, plant capacity, sales and marketing network, on-ground presence is unparalleled. All this has augured well for the company over the years," says Gautam Duggad, head of research at Motilal Oswal Securities.

Also Read: Maruti Suzuki cars to get expensive by up to 2 per cent from January "The industry has been through a long down cycle and is showing signs of a turn. In addition, competitive intensity is muted. MSIL should continue to gain share. The stock trades at one-year forward price-to-earnings (P/E) of 27.3x. While this is more than one standard deviation above the long-mean multiple of 16, we believe multiples can remain elevated for Maruti, given strong earnings growth," says a recent Morgan Stanley report.

In a bull case scenario, they expect the stock to hit Rs 14,400 going ahead if domestic volumes rebound quickly, new capacity (in Sanand, Gujarat) ramps up quicker-than-expected and all new models do well. Volume growth in FY18 is pegged at 15% and 18% in FY19. Their base case target price for the stock is Rs 10,563 and Rs 4,950 in case of a bear market.

Japanese parent Suzuki is also taking steps to capture the emerging opportunity in electric vehicles. Maruti should be a key beneficiary.