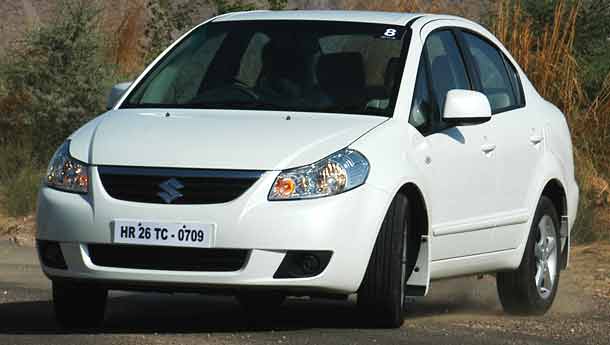 The speedo was climbing into the wrong side of 140 kph. The SX4 that I was driving felt absolutely surefooted on the beautifully paved highway. That was when I noticed them. What began as mere specks in the horizon were growing at an alarming rate and getting transformed into two wheelers coming at me. Yes, they were on the wrong side and that meant on a certain collision course with the SX4 which was now scintillating the fast lane. Welcome to incredible India and particularly Rajasthan. Later I would learn that it is perfectly normal to see motorcyclists, tractor drivers dominating the fast lane on the wrong side of the road. Suicidal?  Let us talk brighter things.

It was one of those moments to react and react fast. Standing on the brakes was the only option since I had to shed some speed and that would normally mean locked wheels, hitting the median and cleaning up the ‘on-coming’ riders. But as I said, it was the only option. Thankfully I was testing the SX4 version and that meant the car came with ABS (anti-lock braking system). I stood on the brakes and the car shed speed with a definite sense of urgency and soon I could see the facial features of riders – they looked content at leaving all the emergency work for me. I had to ensure that the riders did not serve into the middle lane which, thankfully, they didn’t and that meant the SX4 could be steered on to safety while the brake pads were biting bits off the rotors.Sure, I should be ashamed of driving so fast and I should know of the dangers that one should expect on Indian roads. But trust me, 140 kph felt absolutely safe and sane on that piece of road and I am absolutely sure that there are people who would drive their cars at such speeds on our four-lane highways. The moral of the story is simple – buy your car, SX4 or for that matter any new car, with maximum safety features. Our country is going through a transition period and you really don’t want to be a victim of circumstances.

So that is where we begin this test drive report. The SX4 is offered in two versions and the ZXi model comes with ABS (with electronic brake distribution) and two air-bags as standard equipment. Way to go and shows how a true market leader can show the right direction to the rest of the industry.

SAFETY
Should Honda be worried?
Yes. Please bring on the safety kit for the City. The car deserves it.

To look at, the SX4 is er…different. And trust me, to look different in a sea of sedans is a tough job indeed. Like the City (Jazz) and the Fiesta (Fiesta) the SX4 is derived from a hatchback platform (Swift). Those who are familiar with Fiats will recognize the front end treatment first seen in the Sedicci 4X4 crossover and the Suzuki SX4 hatchback.  While  I am not a big fan of stretched headlamps and grilles that offer a rather silly smile the car has decent proportions and, when seen from certain angles, an aggressive stance. What I adore is the quarter-glass kink which makes the car easily distinguishable from a distance. Suzuki did show us a kitted-out version with skirts and aprons which made the car look bottom heavy (nothing a proper set of wheels and tyres cannot cure, though). As it stands the  Zxi gets 16 inch wheels swith 205/60 rubber while the Vxi gets 15 inch wheels with 195/65s. Needless to say, the Zxi looks the part.  Despite the long overhang at the rear the SX4 has the profile of a notch-back – I love it, but some prospective buyers opined that it made it look less of a sedan. This is a car that can carry bright colours well – so choose your car in Sunlight Copper and Supreme Red. That said, the SX4 looks pretty substantial in Arctic White.

EXTERIOR DESIGN
Should Honda worry?
They needn’t. The City ZX despite the ‘toned-down’ reskin job looks absolutely futuristic while the SX4 can only be termed contemporary.

Step into the SX4 and you are greeted by a very functional interior that has been deliberately meddled with to grab your attention. The test car had an integrated sterior with steering mounted controls (brilliant and about time!), adjustable steering wheel, automatic climate control (unfortunately not the digital unit we got in the Swift ZXi) and extremely comfortable seats. Two plasto-chrome strips line the centre console and there is a good sprinkling of the stuff else where too adding to the ‘expensive and sporty’ look. Dark dials and orange display according to me belonged to Audis’ of the nineties but does not look all that out of place in a Suzuki sedan.  A great deal of parts sharing means you can spend long journeys guessing what came from which Suzuki. While the rear room is more than adequate the elbow room for the driver and front passenger is wanting. A very agreeable place to spend time and the tall stance means getting in and out is easier too.

INTERIOR AND COMFORT
Should Honda worry?
Look at the kit! The top-end  City don’t have any of the gizmo bits you get thrown into the SX4 ZXi and the latter costs way less. But the new age construction of the Honda with its petrol tank situated under the front seat means the rear passengers can fold their leg under the seat – something you cannot do with the SX4.

Settle in the comfortable seat, adjust the mirrors, fire the motor and you are in for an audible surprise. Unlike the previous Suzuki engines, this one makes its presence felt. You can pick up the valve gear and other mechanical noises. The 16 valve M-series motor displaces 1586 cc and is generates 102 bhp at 5500 rpm and 14.5 kgm of torque at 4200 rpm. See no revs? Well, this is a typical Euro spec motor from Suzuki and one that does not need to be revved to the moon for good results.

Under hard acceleration (you will enjoy flooring this motor), the SX4 managed to dismiss 60 kph in 5.13 seconds and did a 100 kph run in 12.6 seconds. It is quicker than the 75 bhp Honda City ZX and not so quick as the 100 bhp City VTEC. But, surprisingly, the SX4 motor is quicker in the 100-140 kph run compared to the VTEC. As mentioned above, we faced on coming traffic so couldn’t get more than 170 kph on the speedo which we thought was decent enough speed as long you don’t want to drag a City VTEC for an eternity. Gearing is spot on for a blend of city and highway driving with second gear taking the action to 98 kph and third gear managing 145 kph.The car feels at home when revved hard and the tyres coped admirably at speeds. We are yet to subject the SX4 to a fuel efficiency run but we believe it is capable of doing 12 kpl in traffic with ease. This powertrain makes the SX4 decent enough to drive without making it a disaster when it comes to economy. There is a better way of putting it across though and that would take only one word. Compromise.  May be a sportier version with another 10-15 bhp with longer gearing should be considered.

POWER AND PERFORMANCE
Should Honda worry?
Not really. Those seeking performance should still go for the VTEC while the base motor Honda City still amazes us with its refinement and 14 kpl in traffic magic.

You won’t believe it, but it was difficult to find some rough terrain to put the underpinnings of the SX4 into some serious test. But we did succeed eventually and the SX4 came out with flying colours. The ride quality is sublime for a Suzuki (I drive one on a daily basis, I should know) and the car has enough ground clearance for you to quit worrying about speed breakers. The heart breaking thumps normally associated with fragile cars and potholes was missing in action. The electric power steering is precise at slow speeds and turn-ins, aided by those nice 16 inch wheels, felt much better than in any other Suzuki in recent times. According to Srini who spent considerable time driving the car, the steering lost its sensitiveness as speeds got higher and should be ironed out.Good cornering comes naturally for cars from the Swift platform. The SX4 hatch is about to be unleashed into the WRC circuit later this year too. That said,  on the limit control is not a strength  of cars with torsion beam suspension set-up at the rear. Keep that in mind and you can do your bit of corner carving safely. And yes, those wide section JK Tyres rubber was brilliant when too much power was sent to the front wheels.

RIDE AND HANDLING
Should Honda worry?
The Ford Fiesta is still the king in this department. But the second slot now belongs to SX4.

The SX4 looks, feels and drives like a car that is better put together than any other Suzuki that is made in India. Exceptional fit and finish (including the interior bit) takes it in the saeme league as the Honda. Add to that an aggressive price tag (Rs 6.54 lakh for the VXi and Rs 7.25 lakh for the ZXi, ex-showroom, Mumbai) and you get an extreme value for money proposition. I would recommend one just for the safety features – because we do have motorcyclists and tractor drivers who prefer the wrong lane.