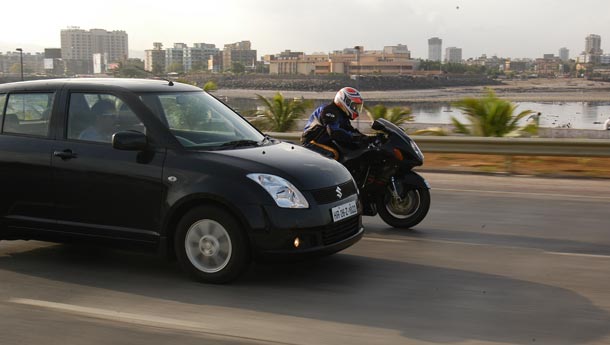 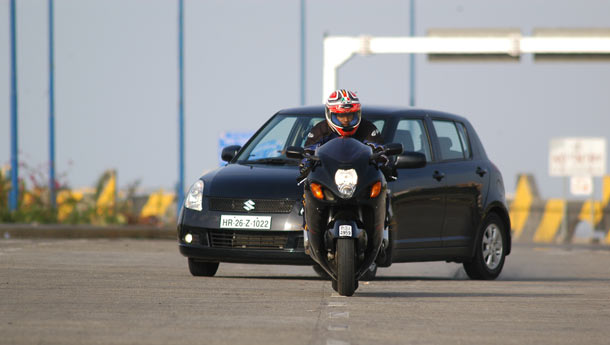 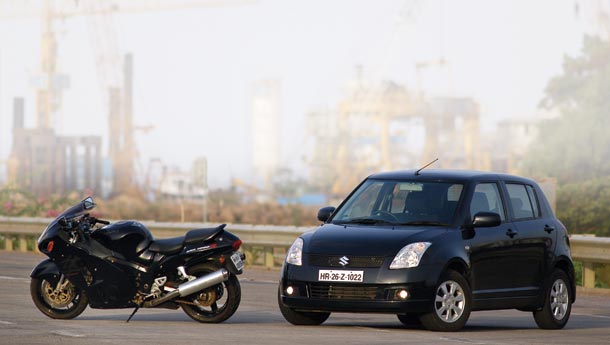 Most of the flying records have been broken already. Rich, adventurous and famous types (read Branson and co) are through with playing with balloons and are now looking at sub-orbital flights to spend money. But hey, they forgot something – no one has attempted to cross the Atlantic on a motorcycle. And after spending some time with the Suzuki Hayabusa, I think it is time someone fitted a huge wing and a small propeller to this incredible machine and just...er... took off.


Lift off it will, since it has a top speed of 317 kph plus – at that velocity even a not-so-aerodynamic human specimen like myself will fly. Now, don’t blame me if you spot a Virgin-branded winged Busa overtaking the Boeing 777 you are flying in, alright?

Ah, to fantasize! Isn’t it a phenomenal feat of mankind that they can dream up things? We were certainly not dreaming when we heard the name Hayabusa mentioned at a press conference recently. The conference was for the newly launched Maruti Suzuki Swift and the press information kit actually said that the new Suzuki hatchback was inspired by Suzuki motorcycles such as, ahem, the Hayabusa. We admit that this story idea was born that minute, since we at BSM can’t control the itch to put a bike and a car together. So what if it was only a few months ago that we put the Comet up against the Octavia RS?

Coming back to our subjects, there are some similarities indeed. Of course, the hatch and the bike were conceived by people sitting in Hamamatsu, Japan (I am certain the latter bunch breathes nitrous instead of oxygen – what else can explain it?). And then both are named after birds – just that the Hayabusa is a falcon that feeds on fellow feathered creatures, such as swifts and blackbirds (the Honda CBR 1000 XX Blackbird was the fastest production motorcycle in the world when Suzuki decided to gobble it – hence the nomenclature). And both the Indian Swift and the Hayabusa have Suzuki engines that displace roughly 1300 cc. The comparison should have ended there – but that is exactly where our story begins.   One is an attractive commuter that develops 87 bhp with great difficulty, while the other is an aerodynamic monstrosity that manages 175 bhp at 9800 rpm (at the crank – 157 bhp at the rear wheel). The Swift, given a clean stretch of road, will nudge 165 kph. The Hayabusa will do 135 kph in first gear as it thunders its way to a top whack of 317 kph (according to the Guinness Book of Records) and 321-330 kph according to most hooligan websites. One is a car you and me may buy to commute and the other the world’s fastest production motorcycle on which you can commute as well. One is transport, the other a phenomenon.

During the BSM road test, the Swift managed to do 60 kph in 6.08 seconds and touched 100 kph in 12.85 seconds, and we thought these numbers were quite good. Till the black Busa that you see in these pages dropped our jaws with a 100 kph run in, hold your breath, 3 seconds and 200 kph in 7.6 seconds.

Passing speeds, did you say? The Swift is nicely geared and it is easy to overtake slow moving traffic thanks to nice mid-range power – 80 to 120 kph is dismissed in roughly 12.12 seconds. Dismissed? What word shall I use to describe a 60-120 kph run in 4.9 seconds? Imagine the state of mind of a transport bus driver when that spec in his rear view mirror passes him at the above mentioned speed! This, dear BSM reader, is a machine that makes you proud of our species and its ability to be in control of  speed. Who was that nitwit who said that 24 kph is all that Homo Sapiens is capable of handling?

Now listen to this. The Hayabusa is history as far as litre class motorcycling goes and any of the new machines (the ZX10s, GSX-R1000s and R1s) will eclipse the acceleration times of the Hayabusa easily. Where does that leave our little hatchback?

It is certainly fun to drive compared to most other cars in its league thanks to the time honoured motor delivering power when you really want it. The Busa is easy to ride too and won’t show any aggression as you pussyfoot around busy city streets. Opening up the throttle of the Swift and the Busa is a classic lesson in contrast – the Swift manages 58 kph in first gear while its two wheeled cousin manages 135 kph. In second gear you will nudge 100 kph in the car while you will be doing a neat 185 kph on the Busa. Up to third and the Swift will touch 145 kph. The ’Busa? A mind-numbing 230 kph. As the Swift maxes out in fourth gear and 160 kph you would be getting close to registering yourself as the newest member of the 300 kph club and climbing in fourth gear. Enough?   The Swift does have one strength, which is its ability to go around corners – we didn’t measure cornering speeds but it is a safe bet to assume that the Swift will carry more speed into most reducing radius corners in the world than the Hayabusa, which lacks two wheels and hence cannot slide around too much. Still, I don’t think the Swift stands a chance on a decent race track with good straights. Maybe the JWRC version with a hot engine under the bonnet, but not this one.

Not satisfied with having fun, we decided to do a standing km run – no racing, so the Swift went out first and clocked a 34.5 second run. The Busa rider launched the bike gently (no drama, no aggression) and just breezed through the gears to do a 19 second run. It could have been quicker. The Swift bowed and the Busa acknowledged.

Really, there was no story to be written since we knew the outcome. If Suzuki has the audacity to say that the Swift was inspired by the Busa, whom are we not to verify that claim? I have been to Hamamatsu and seen everything from the design and development centre which comes up with arguably some of the best small cars in the world to the unassuming factory which produces the Busa. Very unlike the Ferrari facility in Maranello, (which builds the Enzo, a genuine 330 kph car...are you reading my mind?) the Suzuki motorcycle plant is not considered a shrine. But then they do build the fastest production motorcycle in the world today, and if someone got inspired and built a neat little car you can’t blame them, right?

It was a really enjoyable morning and right when we were about to pack up the camera equipment and leave I decided to take a last look at the Swift and the Busa parked next to each other. Drenched in the bright morning sun, the jet black machines gleamed – nooooo, I am not going to justify that Suzuki PR person who wrote the ‘inspiration’ bit, but....the pair will certainly make a nice garage. What do you say?