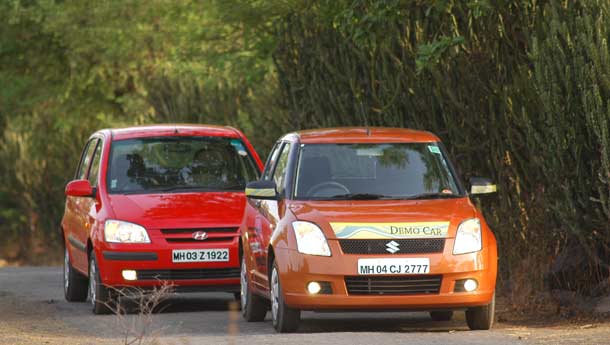 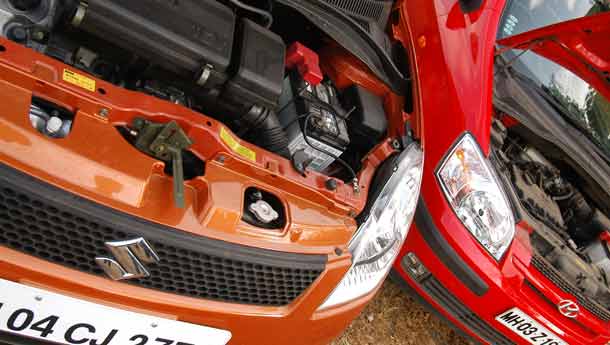 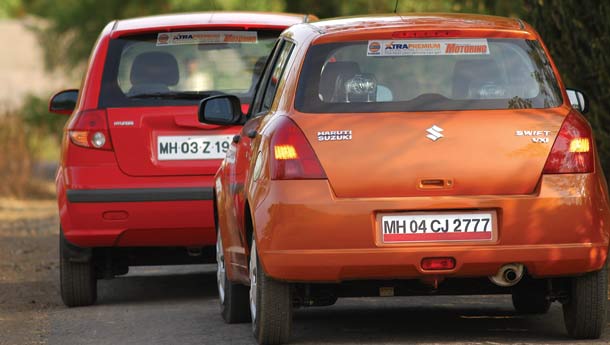 We knew it would be close, but not this close. You see, Hyundai today is a very accomplished company, and some of their cars are getting far too desirable. On the other hand, Suzuki has always been a very good ‘small’ car maker, and for a change, they have made a very good small car that is also extremely desirable.

Really, the Swift has the looks and the engineering credentials to be an extremely ‘buy-able’ car – money no bar. Hyundai virtually went broke to give the Indian-spec Getz almost everything that they offered to the Europeans, while Suzuki went back to their skunk-works room and shoehorned an existing engine for India, amongst other changes. The result, the Getz, our current Car Of The Year was launched at a rather high price point and to a lukewarm response, while the Swift has had a roaring start, partly thanks to a shocking sticker price.

If you are in the market for a ‘grown-up’ hatchback, you have enough reason to be worried. Our Which Car? mailbox was filled to the brim with Swift vs Getz questions. And we decided to get the answer the only way we know – a full-blown comparison test, true to BSM tradition.

Looks
Caution: Subjective territory. There is nothing to dislike the way the Getz looks – it is contemporary, clean, and even the great Hubble will not be able to find an unwanted line in the car. It looks properly balanced, has the right stance, is smart and even has an air of sophistication about it – especially when seen from the rear three-quarters. Yet, what it lacks, the Swift has got – which is character. Look at those peeled-up headlamps, the boomerang taillamps, the high waistline and the flared wheel arches, and you know the Swift is all dressed up for the party. Suzuki took a calculated risk when it came to ticking ‘French flair’ as one of the ingredients that made up the Swift, and I have to say, they hit the sweet spot. While you may give the Getz a second look, you jump when you see the Swift – you know what I am talking about, right? In other words, the Getz is the chic escort you hired, while the Swift is the flamenco dancer in a very short skirt. In a world where mass-produced cars are looking oh-so-the-same thanks to crash regulations and dimensional restrictions, the Swift comes as nice surprise.
Getz: ****
Swift: *****   Interior
Let’s get this straight. The Hyundai has more space inside than the Suzuki, especially for the rear passengers and when it comes to luggage space. As far as the front passenger and the driver go, both cars offer similar level of elbow room and comfort. While the massive A-pillar of the Getz is a big blind-spot provider, the Swift’s A-pillar does not trouble you that much. The colours and textures on offer in the Getz feel superior, and each and every bit is carefully put together. Unfortunately, the Suzuki fails to make you feel special inside the car. The three-spoke steering wheel is a delight and overall ergonomics is as good as that of the Getz, still. If you opt for the top end ZXi model of the Swift, you do get automatic aircon – which Hyundai has not offered in the Getz – and that is a big plus. The seats of the Getz are good, while that of the Swift will offer better comfort for longer drives. Between the cars, it is the Swift that makes you immediately comfortable behind the wheel, but as you start touching and feeling the innards of the cars, the Getz wins easily. And then there is more room!
Getz: ****
Swift: ****

The Swift is better geared for spirited driving too, and our test car easily touched the 100 kph mark in second gear, while the Getz managed only 88 kph. You really have to work the gearbox of the Getz hard to get the car to go anywhere in a hurry, while the Swift powertrain is more than willing to deliver the desired effect that the driver is looking for. However, power hungry types amongst you will be ready to plead MUL to install that 1.5-litre motor from the Baleno under the hood of the Swift. What the Getz loses in outright performance, it gains in the refinement department. If you don’t have any boy racer blood left, you will certainly appreciate the smooth, unhurried nature of the Getz engine. It really feels like Hyundai uses butter to smooth things out in the Getz, while Suzuki feeds the Swift unadulterated sulphuric acid. So would it be power or refinement? We leave the decision to you, but to us petrolheads, the Swift rocks.
Getz: ***
Swift: ****   Ride and handling
It is not the looks nor the tarmac-shredding performance that you appreciate more on a daily basis. Instead, it is the ability of a car to soak up our roads. The Hyundai offers good ride and decent handling on clean terrain. It glides through well-paved city roads and smooth highways very well, but loses its poise the moment broken tarmac enters the fray. On rough roads, the Getz can rival small boats when it comes to body roll and it gets distinctly uncomfortable in no-road situations. The Swift, on the other hand, is better tuned for our road conditions – whether it be ride quality or handling. Like the Getz, the Swift also sports ‘over-square’ dimensions, but it does not have the eagerness to shake you up every time the going gets tough.

The Swift’s weakness is its (electric) power steering that tightens a bit too much at high speeds and is a tad too loose when you’re taking it easy – which is not the case with the Getz. As far as spirited cornering antics and high speed driving go, you feel a bit more secure with the Swift, while the Getz makes you feel like a boy who was caught doing something naughty. It is not that the Getz is bad, but just that anything related to performance-oriented driving, it is the Swift that says ‘yes ma’am’ and jumps from the seat.
Getz: ***
Swift: *****

Verdict
So which is a better buy? As you have seen, the Suzuki Swift has character, better performance and ride and handling more suited to Indian roads. The Hyundai Getz, on the other hand, is understated, better put together, has more space and is more refined. If you have made your pick from the above two lines, well and good. Unfortunately, we know that most of you consider two other factors before deciding to buy a car and those are price and fuel efficiency, right? The Swift is cheaper (though we hear whispers of a price correction/value addition from Hyundai) and the top-end model with safety goodies like ABS and airbags is about Rs 30,000 less than the similarly-speced GLS version of the Getz. And the fuel efficiency of the cars during our comparison test was too close to be a differentiator – with both cars returning 12-13 kpl in city traffic with intermittent use of the airconditioner and 14 kpl on rather ‘active’ highway driving which saw three-digit speeds on a regular basis. So we do have a clear winner in the Swift here. And yes, are glad that it is not just the ‘sticker price’ that wins the case for the newest Suzuki.