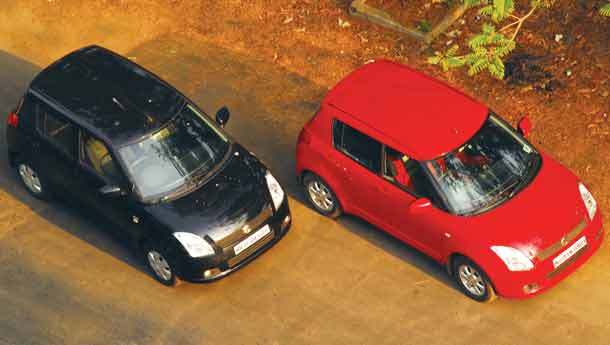 The standing rule in BSM is that those who file the initial driving impression never write the road test report. That meant the Swift diesel road test (combined with a comparison with the petrol model since readers demanded it) was to be done by Srini since I had done the driving impression in the last issue. We were fast approaching the deadline, and SRK, as I call him for no particular reason, was yet to type ‘matter begins’ on his comp. I tried all modes of editorial harassment. Waking him up at unearthly hours and demanding the story never worked because Srini can hold a proper telephonic conversation even while he is fast asleep. He even interviewed the designer of the Rolls-Royce Phantom like that once. I even tried embarrassing him in front of colleagues half his age, but to no avail. The sympathy card that painted the painful picture of poor me waking up at four in the morning for four consecutive days to file copy, and thereby endangering my blissful married life, fell on deaf ears as well. At the end of all these attempts, he would utter something absolutely prophetic, like, ‘I can still do it’.

Since I wanted the March issue of the magazine to come out in the 2007 calendar year and the fact that he was putting together the almost biblical Commercial Vehicle Guide meant only one thing – I was going to write this story. ‘Honey, set the alarm clock for four again, please’.

Not really a worry, since I have put in considerable mileage in both the petrol and diesel Swifts by now. But imagine writing about three diesel cars in one issue and you will realise that even the most prolific writer will run out of vocabulary related to common-rail oil burners. There is only so much of ‘torque steer’ that readers can take in one single issue, right?

buying
We have been getting enough queries on this subject to start a new magazine called Which Swift? for public consumption. The enticing looks of the Swift combined with the fuel consumption figure of the Fiat-derived diesel engine that is fast reaching mythical efficiency status compounds the problem. Add to that the price tag of the Swift, and the issue can be narrowed down to this – Swift VXi Petrol at Rs 4.6 lakh on road (Mumbai prices) or a Swift diesel at close to Rs 5 lakh on road. I am tempted to finish the story at this moment by saying that you should buy the Swift ZXi the way I did only because a. you get all the safety features, fat rubber and automatic aircon and b. because Maruti-Suzuki is tired of playing Santa and may stop building the ZXi with all the bells and whistles sooner than you think. Alright, you don’t want to spend so much money on a hatchback and want to choose between the petrol and diesel, so now I can tell you how these cars fare.

living
The Swift diesel is a very sorted out car. Sure, it does not get proper foot gear, but lot of work has gone into ensuring that the joie de vivre factor of the Swift is intact. The four-cylinder 1248cc oil burner develops 75 bhp at 4000 rpm and a stupendous 19 kgm of turning force at 2000 rpm. Compare that with the petrol’s Esteem-derived 1298cc inline-four, that produces 87 bhp at 6000 rpm and 11.3 kgm at 4500 rpm. So both engines have their strong points, the petrol develops more horsepower outright, while the diesel wins the torque sweepstakes. Still, the same ingredients that make up for an extraordinary small diesel when seen alone fail to impress when driven back to back with a petrol. Crank the motor and the diesel makes enough noise for everyone around you to know that you have got a diesel under the hood.

At idle, the noise is only marginally high though. While you just cannot hear the 16-valve petrol idling inside the cabin, the diesel rumble is audible and a very tolerable amount of vibration tells you that you have ticked on economy instead of refinement. Not a promising start then for the Swift diesel.
On the move, the humongous torque of the multi-jet diesel motor together with a turbocharger that wakes up early ensures a 0-60 kph run under six seconds. Petrol is quicker, but only marginally so. While the second gear in the petrol model can take you close to an indicated 100 kph, the diesel begs for a shift around 81 kph. And by the time the diesel hits 100 kph, the petrol is away and gunning for another galaxy. Excellent mid-range grunt of the diesel is its saving grace though. Enter fourth gear at around the 121 kph mark, and you will have the petrol car very much in sight again. Both cars are capable of doing 160 kph top speeds, with (obviously) the petrol reaching there first. So if you want maximum performance and thought the diesel could deliver it, sorry folks, the petrol is still where the action is. The commendable part is that the diesel does not disgrace itself.

saving
If you have a 70 km per day commute like mine, you will end up saving enough money to justify another child with the diesel. Before you get all excited and get to work, let us check the maths here. Let us fix the price of fuel at Rs 50 for a litre of petrol and Rs 40 per litre of diesel (I know, it is cheaper after the price cut, still). Assuming that I commute 25 days to work, I will be covering 1,750 km a month. I will then need close to 145 litres of fuel with my petrol Swift, which returns 12 kpl in severe traffic conditions with the aircon always switched on (can’t take pollution, noise and toxic fumes). That costs me a whopping Rs 7,250 a month. The same distance covered by diesel meant that I used just 120 litres of fuel, which amounts to Rs 4,800 only. The saving is Rs 2,450, and let me tell you that a good CBSE school would charge you only Rs 1,000 per month for a child. The rest you can use to buy cheap video games (trust me, modern children don’t need food once you put them on a video game diet). That was super metro economics we were talking about, and if you are lucky to live in more peaceful places, you can extract maybe 14 kpl from the petrol. In such a scenario, the diesel will put a thumb on its pretty nose and return 21 kpl easily. There!

more living
The ride quality offered by the Swift diesel is decidedly better in most driving conditions than that of the petrol. This is thanks to new springs and dampers that have gone into the diesel to compensate for the heavier powerplant. Still, the ride height remains the same for both cars. While the petrol model feels fragile and makes heart-breaking ‘thunks’ every time it hits a pothole, the diesel version tends to behave like a mature adult who has seen many ups and downs in its life.

Sure, the petrol car is easier to drive and park, but the diesel (as Srini helpfully pointed out as I was nearing the end of my article) is more suited for driving in traffic. He is correct for a change. The petrol model likes to rev and when you don’t get a chance to do that, you end up riding the clutch. The diesel can chug along in third or even fourth at 20 kph without any engine knocking. I tried this out and realised it was true till the engine died on me in the middle of traffic once. The point is, the diesel is more driveable in traffic thanks to the gearing, but what needs to be added here is the fact that the controls are a tad heavier (especially the clutch) and your calf muscles will start an argument with your brain as you get stuck in traffic-crawl mode to reach home.
which one then?

If you don’t do serious commuting and will be using your Swift for occasional and pleasurable activities like family picnics and wedding runs, then the petrol car is what you need. And yes, if you are a petrolhead, I don’t need to stress on the fuel option in any case. If inter-city driving, long commutes and dropping relatives in another part of the subcontinent (one bad habit we Indians are pretty proud of) are things you do with your car, then the diesel makes more than perfect sense. In such a scenario, the additional money you may end up paying for the diesel model is more than justified. And yes, if the roads in your area are not up to scratch, the diesel with its ride quality is a better idea too. Being a thoroughly modern engine means this Swift diesel will need only as much maintenance as the petrol even in the long run. Simple, isn’t it?

As for Srini, trust me to dump the Hyundai Getz petrol vs upcoming diesel story on him.