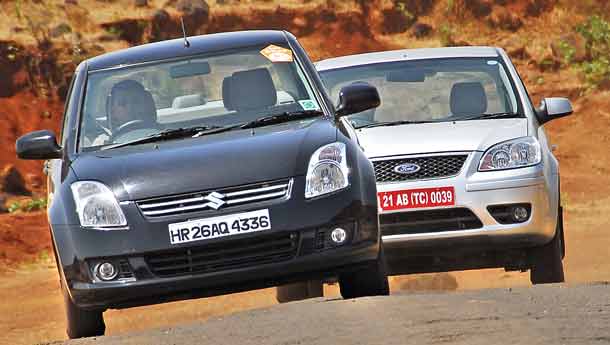 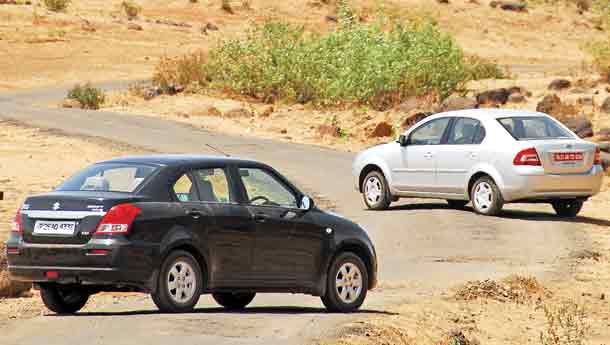 First there was the Maruti Suzuki Esteem. And then the Ford Ikon. You might say there’s no more a relation than they being booted cars going for cheap, but there’s more. Actually, they were originally conceived as hatchbacks; the Suzuki sold in several countries as the Swift (yup!) and the Ikon as the Fiesta in Europe. Both were inexpensive sedans with a hint of performance, elevating them to a sort of cult status in India. So while the Esteem saw the assembly line for the last time in December, the Ikon is still soldiering on nine years later as a cheap, no-frills sedan for largely the fleet market.

Maruti has now replaced the Esteem with the Swift Dzire, the Swift with the boot. It isn’t a perfect fit in the Esteem’s shoes though, now larger, a bit more expensive, yet substantially more modern and comfortable. Ford’s so-called Ikon replacement, the Fiesta 1.4, is even more expensive than the Dzire (50k more for competing top-end variants) but is nothing but a last generation Fiesta derivative with a boot. Both are not very expensive sedans and still retain that hint of performance. So in true BSM tradition, we just had to find out which one is the worthy successor, the one that gives the other the ‘royal boot’!

DESIGN
The formula of adding a boot to a hatchback has worked wonders in India, and going by the success of the Fiesta and the bookings of the Dzire, that formula seems to stay intact. The Swift was always considered a crisp design with those muscular flanks and sharp lines, as well as its Mini-inspired shell. All of that disappears with the Dzire. Up front you now get a twin-slat chrome moustache on the grille and the first signs of real change only appear from the B-pillar onwards.   A larger rear door with a very visible larger window, a slanting rear windscreen with the high boot-lid deck, the rear wheel arches and the chrome strip are indicators of the 500 mm extension. Now imagine three people seated in the rear, with some luggage in the 400-odd litre boot and the sight is a bit ungainly. The problem lies with the integration of the boot, something that even took the likes of Ford some time to get it right. Despite attempts to design a Chris Bangle rip-off, the design is practical, which allows for good rearward visibility (better than the SX4) and a capacious boot. And though we think the Dzire boot is not exactly an example of fine aesthetics, people are still in the queue to drive it home. Never mind.

While the Fiesta has better line and form in terms of boot integration, it is no beauty queen either. It’s been two and a half years since Abhishek Bachchan stormed in with the Fiesta... and well, it still looks the same. In this quick changing market, the Fiesta has started to age very quickly. Bland looks aren’t helping it either, still it has some sort of form. Unlike the Dzire, the Fiesta’s boot doesn’t appear like an afterthought, a more integrated design at that. But Ford need to quickly give this car a facelift, something even the sales numbers seem to suggest.
MARUTI SWIFT DZIRE : ***
FORD FIESTA 1.4 : ***

INTERIOR
At the helm, both cars have a sporty appeal. With the Dzire you get the same seats up front, the same driving position and the steering from the Swift. In this, the ZXi, you have the audio controls on the steering. Then you notice the integrated music system, your fingers rub against the indented ‘SRS Airbag’ tags and you want to crank up the blower speed on the auto climate control. At this point in time if you consider the Fiesta 1.4 under-equipped, your crosshairs have found your target.

The driving position is very good and you can also adjust the steering for height. De-couple yourself from the role of the chauffeur and jump into the back seat of the Dzire and the changes are noticeable. Because the seat is now six centimetres wider and has an additional five degrees of recline, knee and shoulder room have improved. This, mind you, without even increasing the wheelbase.Jump straight out of the Dzire and into the Fiesta’s rear seat and the marginal increase in legroom is noticeable. Unlike the Dzire, the backrest is more upright and doesn’t lend you that kingsize feeling. Despite that, it’s still comfortable for the odd long journey, but if you want to enjoy those long hours, you are better off behind the wheel. Traditionally, Fords have never skipped on their sporty appeal and the Fiesta sticks to its roots steadfastly. The steering has the right material, the right size and the right thumb holding points. You sit higher – so does the gearlever, but it also has that snickety value to it, like the sound of the ‘ka-ching’ of a coin falling into the slot machine. But in this company, the Fiesta appears a bit too bare and under-loaded compared to the Suzuki.
MARUTI SWIFT DZIRE : ****
FORD FIESTA 1.4 : ***   POWERTRAIN & PERFORMANCE
The Dzire has the grunt to out-accelerate the Fiesta. Despite the additional 30 kg compared to the hatchback, the Swift Dzire doesn’t feel underwhelmed, thanks to the 84.05 bhp/tonne power-to-weight ratio. Rated at 87 bhp@6000 rpm and about 11.5 kgm of peak torque, Maruti have stuck to the same ratings as the Swift, instead opting for an engine remap to sort matters. The Fiesta has a bit less peak power at 82 bhp arriving at the same rpm, but the additional 100cc has meant Ford have managed to liberate more peak torque at 12.95 kgm.

In a straight line, the sheer grunt of the Dzire helps it to whiz past the Fiesta. As the speedo rises, the gap starts to widen and at 100 kph, the two cars are just a second apart. Top speeds are nearly identical, a shade above 160 kph, but the Dzire still manages to give up the aerodynamic fight quicker than the Fiesta. While the Fiesta is no sloth in the performance stakes, it loses on account of its higher weight, a porky 100 kg over the Dzire.Even though the Dzire trumps the Fiesta on the charts, it isn’t without its hangups. While the new engine remap might have been offset for better fuel efficiency, the car feels a bit dimwitted in the way it puts its power down. What doesn’t also help matters is that clutch. Three years and numerous complaints later, the clutch still stays as the weakest link in the package. As you will read in the long-term update of our Dzire elsewhere in this issue, Maruti Suzuki need to desperately hunt for a solution. It shows when you drive around town, the car tending to balk and showing some refusal in getting off the lights cleanly.

No such drama with the Fiesta, which is an absolute hoot to drive around town with the power coming in a little more instantly at lower revs, though it could have done with a trifle more torque below 2000 rpm. The 1.4 Duratec is also less buzzy and a bit more throaty. It lulls you into pressing that throttle a little harder and yet rewards you with better efficiency on the whole.
MARUTI SWIFT DZIRE : ****
FORD FIESTA 1.4 : ****

RIDE & HANDLING
How important is the wheelbase length on a handling track? Very. The smaller Swift hatchback has always trumped around a handling track thanks to its wider front track and fairly long wheelbase. So the Dzire should have handled less favourably on our PET (Performance Evaluation Test) and it did. The faster turning EPS was always a joy on the Swift, not so on the Dzire. Around the cones, the car tended to lose its rear end very easily and by the time the car was into the fourth set of cones, one had to spend more effort controlling opposite lock and hunting for a cleaner line. Maybe Maruti should have adopted a slightly higher steering rack ratio, a little more forgiving for novice drivers.

Despite better grunt, the Dzire couldn’t stop the Ford from winning the PET contest. Though it lost more time in putting down the power that arrives at higher revs, the Fiesta never froze at the sight of the cones. It was actually the easiest to maintain a tighter line, lap-after-lap. The Fiesta’s slightly heavier steering, coupled with the presence of a mechanical pump instead of EPS, gifted the car with more feel and more predictability. What also helped was the longer wheelbase that prevented the rump from getting loose. At the end of it all, the Fiesta notched a time of 54.36 seconds, nearly one and half seconds faster than the Dzire.

The Fiesta also rides better than the Dzire, a bit more pliant when exposed to potholes. However, it still tends to thud a little more and transfer suspension noise to the occupants when it finds an inch or two-wide gap in the road. But let’s say, it’s more forgiving to rear seat passengers than the Dzire.

VERDICT
The Ford Fiesta wins the shootout. Yes, if this were left to my left-brain, the Fiesta would find itself on the top of the pedestal. Alas, we live in the real world. For six lakh rupees, car purchase is an integral part of the sensible lot. They seek value, a no-nonsense approach and yet that ounce more of appeal. And the Dzire wins on all three counts.

It’s the Maruti Suzuki Midas touch that everybody else is trying to emulate, but finding it a rather tall order. The Japanese firm changed the rules of the game with the SX4 in the C-segment by loading it to the gills, even though it might not necessarily be the most sound product. The presence of all those titbits on the dashboard do play an important role in luring the customer into signing on that dotted line. Even then, the Dzire is a capable car 85 per cent of the time. It’s the last 15 per cent where the Fiesta nudges it, but trust me, you might never even wander into that zone. As an Esteem replacement, the Dzire ticks a lot of boxes, boxes that even the Esteem didn’t tick. But if you are hunting for a car with the original’s kindred spirit, it’s the Ford Fiesta that will wow your heart.