Microsite of Maruti Suzuki S Cross has gone live and interested folks can now register for the upcoming crossover. Maruti Suzuki has unveiled the S Cross at the IIFA awards and the awards will be aired in the first week of July on Colors TV. Moreover, the crossover is expected to launch in coming weeks. 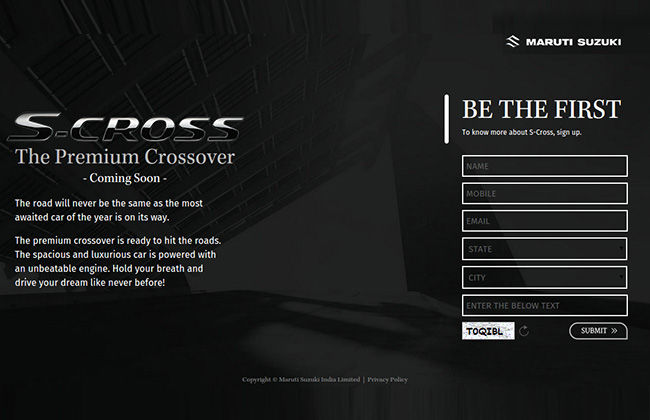 Like Maruti Suzuki debuted the 1.3-liter MultiJet way back in 2007 with Swift Diesel, they will once again debut the Fiat’s 1.6-liter MultiJet in the country. In their microsite, Maruti is indeed saying - ‘car is powered with an unbeatable engine’. It will be most probably powered by the 1.6-liter MultiJet from Fiat. And also S Cross has been spied numerous times with the 1.6-liter DDiS badging. Suzuki offers this engine in S Cross in UK and it comes with 120 PS alongwith a max torque of 320 Nm. This motor will be mated to a 6-speed manual unit and Suzuki is expected to offer their AWD tech - AllGrip, maybe at later stages, if not at the time of launch.

Don’t Miss: Maruti Suzuki S-Cross - 5 Things You Must Know About

Other engine options may include the ones in the Ciaz - 1.4-liter K14B naturally aspirated petrol and 1.3-liter DDiS200 90PS diesel. Both of which will be mated to a 5-Speed manual unit.