Maruti Suzuki, which sells every second car in the domestic market, has revised its annual volume growth forecast to 8 per cent. The Suzuki-owned company has been logging a double-digit growth rate for four consecutive years. It had set a growth target in excess of 10 per cent for FY19.

The country's most valuable automaker has reported a flat growth in volumes for five consecutive months of the year, beginning July. The company's volume has grown by 7.4 per cent in the first eight months of the year to 1.77 million units. December is expected to see a marginal decline as the company's plants will remain shut for maintenance during the last four days of the month.


R S Kalsi, senior executive director (sales and marketing) at Maruti Suzuki, said the company was expecting growth of 5-6 per cent in the last quarter of FY19 and that might help the company close the year with a growth rate of 8 per cent. "We will strive for double-digit growth but, given the external environment, it looks difficult," he said.

The company attributed this slowing of demand and revision of forecast to a combination of factors including high interest rates, increased insurance cost and firm fuel prices. It said there was no new model launch in the volume segment. The company managed to clock a double-digit growth for four consecutive years with the launch of blockbuster models such as the Baleno, the Brezza, and the new Dzire. In FY18, its volumes had expanded by 13.4 per cent to 1.77 million units. If it had managed to grow at a pace similar in FY19, it could have achieved a milestone of 2 million units in annual sales, ahead of 2020.


A slowing growth rate at Maruti Suzuki is a worry for the overall industry growth, since the carmaker commands a share of 52 per cent in the domestic market.


Even with a growth rate of 7.4 per cent, the company's growth is ahead of the industry's 4.9 per cent expansion during the April-November period. 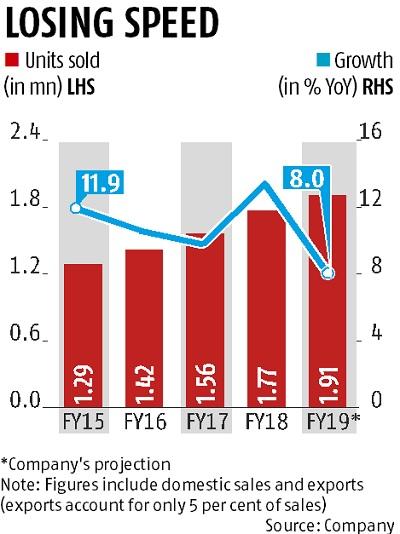 A slowing retail demand has left dealers saddled with unusually high inventory levels, triggering heavy discounts to clear stocks. Chairman R C Bhargava said, "We have aggressive retail sales target for December. We expect to achieve that target. So, inventory at the beginning of January will be at low levels. We will also launch a new model in the next quarter, which will help reverse the trend and push volumes."

Bhargava said the company would stop the production of most BSIV vehicles ahead of the April 2020 deadline. "Our plan is to introduce only BSVI-compliant models starting the next financial year. Production of a majority of the existing BSIV models will come to a halt by December 2019. BSIV vehicles will be produced only on demand from customers from December 2019, or if the company feels that it can manage the time of distribution and registration of such vehicles ahead of the deadline," he said.


The Supreme Court has maintained that the sale and registration of BSIV vehicles will stop after March 31, 2020.