Maruti Suzuki India reported a quarterly loss for the first time since its listing in 2003, as the coronavirus lockdown and supply chain disruptions sapped demand for the country's biggest automaker.

The pandemic has taken a heavy toll on automakers globally as people choose to stay indoors and worsened problems for Indian carmakers, which were already seeing inventory pile up because of weak demand. Maruti's shares fell as much as 2.5 per cent as it reported a net loss of Rs 249 crore for the three months ended June 30, compared with a profit of Rs 1,436 crore a year ago and analysts' average loss forecast of Rs 296 crore, according to Refinitiv data.

The company posted a pre-tax loss of Rs 370 crore, as compared with a profit of Rs 1,853 crore in the year-ago quarter. The carmaker said unit sales slumped 81 per cent year-on-year to 76,599 vehicles as it reported numbers days after Mitsubishi Motors and Nissan Motor forecast record losses.

Global sales at Nissan fell 48 per cent to 643,000 vehicle in April-June as sales halved in North America and fell 40 per cent in China. India went into a lockdown for over two months beginning late March. Maruti said manufacturing during the quarter was equivalent to about two weeks.

Revenue from operations fell nearly 80 per cent to Rs 4,107 crore, it added. The company's strong balance sheet with huge cash and cash equivalents will help it in terms of providing support to its entire value chain system, said Arjun Yash Mahajan, head of institutional business at Reliance Securities. India's auto sales volume is expected to take another 3-4 years to return to peak levels, an industry trade body said earlier this month. 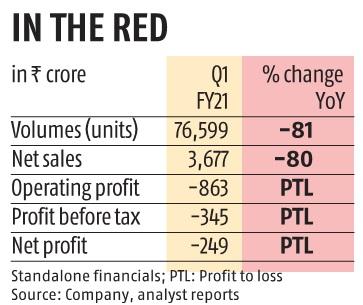