Firm commodity prices, a slowdown in sales, and a double-digit increase in discounts pulled down the profit of Maruti Suzuki by 10 per cent in the quarter ended September 30. The country’s biggest car maker reported a profit of Rs 22.40 billion for the quarter against Rs 24.84 billion a year ago. This is the first decline in the company’s profit after nine consecutive quarters of profit growth.

Sales revenue of Rs 215.51 billion for the September quarter was marginally higher by 0.50 per cent over the corresponding quarter of last year. The company, which has a market share of about 52 per cent in the domestic market, sold 484,848 vehicles, 1.5 per cent fewer than the year-ago quarter. Of these, 455,400 units were sold in the domestic market, while the rest were exported. The company’s stock price slipped more than 2 per cent in intra-trade on the BSE but recovered to close at Rs 6,724, down 0.65 per cent.


“The conditions have changed for the worse in the last few months. This festival season is not showing any buoyancy over last year. We do not expect a 10-15 per cent jump in festive season sales,” said R C Bhargava, chairman of the company. He said customer sentiment and affordability had been impacted by the regulation that required the purchase of three-year insurance with a new car. “This has caused an increase of Rs 9,000 in the price of a car,” he said.


Bhargava also attributed the change in customer sentiment to the regular price increase in petrol and diesel. The company’s Ebitda (earnings before interest, tax, depreciation and amortisation) margin in the second quarter stood at 15.3 per cent against 16.9 per cent last year. 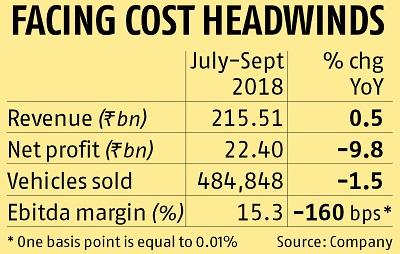 Maruti Suzuki had projected double-digit volume growth for FY19. Bhargava said it was not going to be an easy task.


“We do not know what will happen in the second half of the year. The company will make its best efforts to achieve a growth rate of 10 per cent this year,” he said. In the first half of FY19, the company sold 975,327 vehicles, growing 10 per cent over last year. In order to push sales during the quarter, the company had to offer an average discount of Rs 18,700 a vehicle, 23 per cent higher compared to Q2 of FY18. “Discounts have been on the higher side this quarter. Discounts tend to be higher when the market is weak,” said Ajay Seth, chief financial officer of the company. The impact of this additional Rs 3,500 discount a vehicle over last year translates into Rs 1.7 billion on sales of 484,848 units. The waiting period on some of the company’s best sellers such as Baleno, Dzire and Swift has come to an end. Seth said the company paid parent Suzuki a royalty of 5.7 per cent on revenues this quarter compared to 5.9 per cent last year. He said the adverse foreign exchange had an impact of 120 bps on margins.


The company imports some parts from Japan and also makes payment to Suzuki in Yen. The cost of material as per cent of sales rose to 70.8 per cent in the quarter against 69.7 per cent last year.