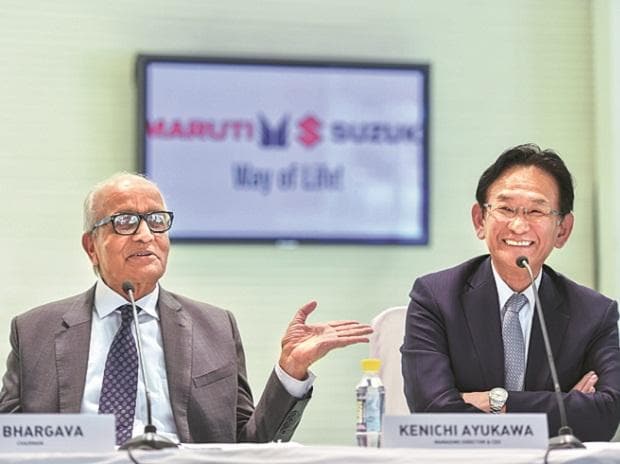 The country’s top carmaker, Maruti Suzuki, on Friday reported 10 per cent growth in profit for the quarter ended March 31, 2018. Net profit for the three months stood at Rs 18.8 billion, lower than analysts’ expectations of over Rs 22 billion. The company said an increase in corporate tax rates affected profitability.


The company’s stock price had gained over 2 per cent on the BSE before the announcement, but slipped almost 2 per cent later to close at Rs 8,778. The average realisation per vehicle for the quarter rose 3.3 per cent to Rs 406,000. This was also a function of a lower average discount at Rs 13,900 per vehicle compared to Rs 15,194 in Q4 of FY17.


Royalty payment for the quarter stood at 5.7 per cent of the sales revenue, against 5.4 per cent in the corresponding period of FY17, primarily a function of the yen-rupee fluctuation.


R C Bhargava, chairman of the company, said the increase in corporate taxes to 29 per cent in FY18 (against 26 per cent in FY17) affected profitability. “We did better in all aspects over FY17 but there were certain unforeseen and exceptional items,” he added.


The company’s non-operating income due to mark-to-market impact on invested surplus had a bearing on performance. The company had to pay Rs 2.5 billion to HSIIDC to settle demands for an enhanced compensation to landowners for the Manesar plant during Q4.

“The impact of firm steel and alumninium price alone for the year is Rs 7 billion,” Bhargava said.


Bhargava said the company’s board and Suzuki had approved the new royalty mechanism under which payments to Suzuki would be made in rupee. Maruti Suzuki will also get a volume-linked discount from parent on royalty based on certain benchmarks.

The three new models — Ignis, Dzire and Swift — have already come under the new mechanism and all models are expected to be covered by 2021. Bhargava said 5 per cent is the cap under the new mechanism and by 2021 royalty will be lower than 5 per cent.  The company has also decided to create an Employee Welfare Fund which will get 1 per cent from the annual profit every year, beginning FY18. The money will be used to create housing infrastructure for employees and subsidising home loans among other things.


It will also set up a trust to promote scientific research and technology in India. This trust will also get a per cent of annual profit.