Maruti Suzuki may see margin decline in Q3 due to volume, cost headwinds

With sales volumes disappointing at the start of the festival season, Maruti Suzuki, the country's largest passenger vehicle company, could be facing a difficult December quarter.

This is on account of both lacklustre demand and higher input costs. The company is hopeful of a recovery closer to the Diwali season, led by rural demand. However, flooding in Kerala and higher insurance, financing and fuel costs have derailed demand.


After flat sales growth in July and a three per cent drop in August, volumes in September rose by only 0.7 per cent, resulting in a 1.5 per cent fall in the September quarter. Given a weak October so far, volumes would have to rise sharply for the company to meet its full-year forecast for 2018-19 of double-digit volume growth. It had achieved 10.5 per cent growth in the first half of the financial year. 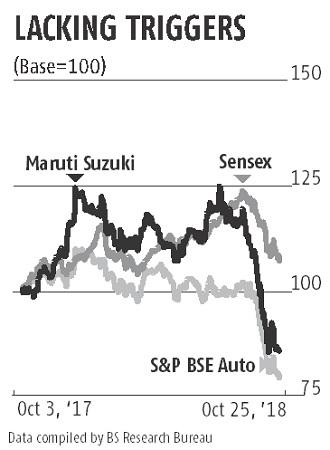 The demand outlook, given the Rs 3,500 year-on-year increase in average discounts in the September quarter to Rs 18,750, does not bode well.

The other worry for the company is on profitability. Higher commodity costs, foreign exchange movement and discounts/sales promotion costs led to a 140 basis points fall in operating profit margins to 12.6 per cent over the year-ago quarter. Given the one-quarter lag for passing on higher raw material costs by vendors, some of the higher costs could come in the current quarter. Maruti's raw material imports are about 18 per cent of net sales, of which 13 per cent are through suppliers. An adverse rupee-yen equation means a higher cost of imported inputs.


The company has not taken any decision on hiking prices at the start of the festive season, given the impact it can have on the market, which is already struggling with multiple headwinds.

A strong export show would have helped but shipments to countries outside India were down 15 per cent in the quarter, due to currency devaluations (of the importing countries) and import restrictions. Export was down eight per cent in the first half of the financial year and accounted for about six per cent of Maruti's overall volume.


The competitive position of the company continues to be strong and it has done well to limit the impact of higher costs on margins. However, given the volume and cost headwinds, margin decline in the current quarter cannot be ruled out.