Maruti Suzuki is likely to launch the Baleno RS in September this year. It may be recalled that the country's largest car-maker had hinted that the Baleno RS and Ignis would come to the Indian market during the festive season, though it had not divulged the exact launch details. 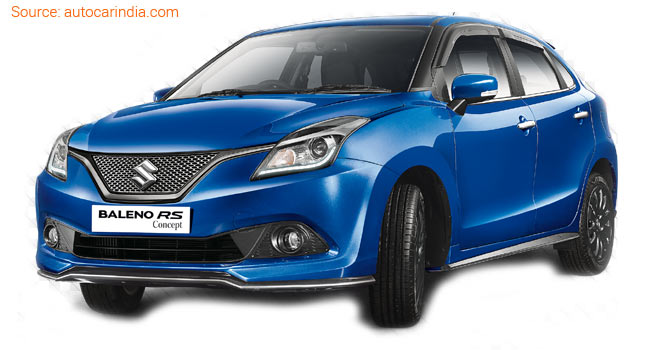 The Baleno RS, the Boosterjet engine-powered version of the popular premium hatchback Baleno, made its debut at the Auto Expo 2016. The 1.0-litre Boosterjet engine would churn out close to 110bhp of power and 170Nm of peak torque.

The Baleno RS will take on the likes of Fiat Abarth Punto, Ford Figo 1.5-litre petrol and Volkswagen Polo GT TSI in India. The transmission in the new variants of the Baleno is expected to be taken care of by a six-speed automatic transmission.

From a visual stand point, although the Baleno RS would look identical to the regular model of the hatchback, it will come packed with additional features like side skirts and new diamond cut alloy wheels. The new variant will also get sportier front and rear bumpers. Other features expected include reverse camera, automatic climate control and 7-inch touchscreen SmartPlay entertainment system with Apple CarPlay.

The Baleno RS, the next model to join the company's Nexa premium line-up, is expected to be priced at about Rs. 9 lakh (ex-showroom).