Maruti Suzuki Ignis to Be Launched around Diwali 2016

India's largest automaker Maruti will soon be introducing its next offering, the Maruti Suzuki Ignis, in the utility vehicle (UV) space. The car is slated to be launched near Diwali and will rival the likes of the Mahindra KUV100. This upcoming UV was recently showcased at the recently culminated 2016 Indian Auto Expo. The Ignis will be Maruti’s contender in the micro-SUV segment.

When juxtaposed with the KUV100, the Ignis will be a five-seater and is expected to provide more cabin space to the occupants. Unlike the Vitara Brezza, the Ignis is likely to be launched in two variants: petrol and diesel. 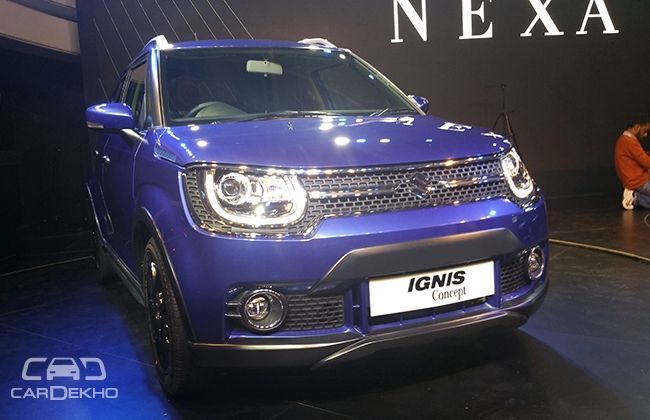 The petrol variant will be powered by the 1.2-litre K12B engine. This powerplant will be ideal for city commutes since it will come paired to an optional CVT automatic transmission, in addition to the five-speed manual gearbox. The petrol powerplant will also help Maruti in keeping the price of the Ignis competitive and we expect the car to be launched at a base price that falls in the ballpark of Rs 4.5 lacs.

The more expensive diesel variant is expected to incorporate the company’s time-tested 1.3-litre DDiS mill. This motor is expected be incorporated by the Ignis in its 75PS state of tune which, combined with the car's lightweight construction, will mean that it will prove to be an ideal utility vehicle, meant for long journeys and occasional soft off-roading.

The Ignis is expected to be sold out of Maruti’s premium Nexa dealerships, which will make the UV its most affordable offering. Considering the premium appeal of this micro-SUV, Maruti will offer the car with safety features such as dual-front airbags and ABS with EBD as standard.

In addition to Maruti’s brand value and the Indian consumer's partiality towards utility vehicles, we expect the Ignis to sell like hotcakes and feature long waiting periods.

Recommended Read: Maruti Suzuki Ignis; How It Looks Inside Out