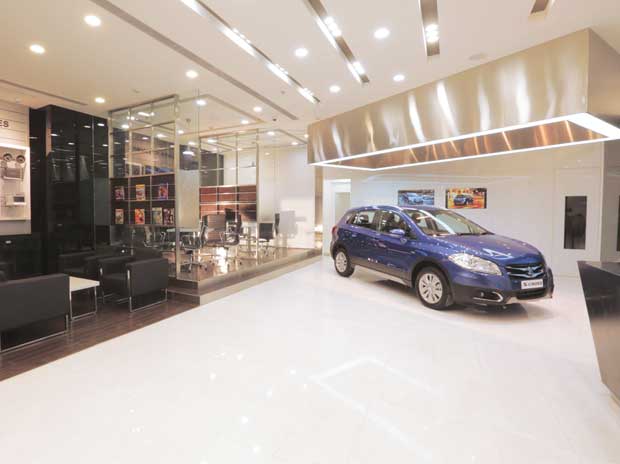 Shares of Maruti Suzuki India (MSIL) dipped 4 per cent to Rs 6,780 on the BSE in early morning trade in an otherwise strong market, on reports of production cut due to slower demand.

Maruti is estimated to have cut production to around 126,000 units as compared to more than 172,000 units a year ago, which is a 26.8 per cent reduction, added report. CLICK HERE TO READ FULL REPORT.

The inventory levels remain high despite aggressive discounting schemes and exchange bonus. Mounting pressure on dealership profitability was a common concern of dealers due to persistent wholesale-retail mismatch for MSIL.

“The pain is more prominent in Nexa channel due to higher inventory compared to Arena, regardless of 20 per cent higher incentive given for Nexa amidst the demand headwinds for models sold through the channel (as highlighted in our downgrade thesis). We believe average monthly losses for many Nexa channel outlets are to the tune of around Rs 1 crore and disenchantment is growing in the newer Nexa dealers,” the brokerage firm said in a company update.

We foresee elevated discount levels to persist for MSIL amidst model/market linked demand headwinds. This, along with the looming cost increases to comply with safety and emission regulations, are likely to restrict sustainable margin to around 12-13 per cent (150-200bp lower than current street estimates). We believe rising competition in its core segments, lack of addressable market expansion scope and a brand limitation above Rs 10 lakh price point will reverse the market share back to around 45-47 per cent in the next couple of years, it added.