India’s largest carmaker and most-profitable automobile company, Maruti Suzuki, is expected to report its first dip in profit after nine quarters. The dip, analysts said, could be in double digits.

The performance in July-September quarter is said to have been impacted by factors such as lower sales volume, pressure on margins from rising input costs and discounts, and a stronger Japanese Yen. The company will declare the results later this month.


In a trend reversal, the company’s sales volume during the second quarter of FY19 dipped 1.5 per cent to 484,848 units. This means the revenue growth during the quarter can only be marginal, helped by improving product mix as some price increases taken during the year. Prabhudas Lilladher, a brokerage firm, expects the company to report a decline of 18 per cent in profit during the July-September quarter upon a marginal 2 per cent increase in revenue.


“Maruti Suzuki’s volumes were down 1.5 per cent YoY and with no significant price hike taken along with higher discounts given during the quarter, the company is expected to report a muted revenue growth of two per cent YoY. Further, given the commodity price rise as well as unfavourable Yen movement, margins are expected to be lower by 270 bps compared to Q2 of last year,” the brokerage firm said in a report early this month.


Incidentally, the Q2 of FY18 was the best quarter for the Suzuki-owned company in terms of profitability. It posted a record quarterly profit of Rs24.84 billion during Q2FY18. The decline is expected on a base of this record profit.


HDFC Securities has trimmed the company’s FY19 profit projection by 11 per cent to Rs81 billion, while reducing the target price per share to Rs8,252 per share from Rs9,664. The stock is already down over 31 per cent since December 2017 when it hit a record high of Rs10,000. The brokerage said the target price has been reduced after factoring in the commodity inflation, higher discount, appreciation of the yen, fall in other income and rising fuel prices. “We believe that all negative are already priced in,” it added while recommending investors to buy the share.


An appreciating Yen means Maruti Suzuki has to fork more money in royalty to parent Suzuki. It also makes import of components expensive for the carmaker. 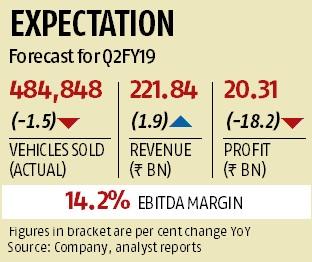 In August, the company had reported a 3 per cent decline in domestic sales, attributing the performance to severe floods in Kerala and heavy rains in other parts of the country. There was no growth in July either, when domestic volume slipped 0.60 per cent owing to a high base effect of last year following goods and services tax (GST) rollout.


The waiting period on some of the company’s bestsellers such as Baleno, Dzire, and Swift has come to an end and the dealerships have also started offering discounts on some of these products to push sales.


The performance of Maruti Suzuki is a reflection of the challenges that the domestic car manufacturers are facing: high fuel prices, increased burden of insurance and increasing interest rates. These have emerged simultaneously and impacted sentiments among the buyers.


Korean carmaker Hyundai, the second-biggest player, also reported a decline in August and September and a growth of just 1 per cent in July, which means its July-September domestic volume is lower YoY. Barring Tata Motors, most other players have reported a dip in volume in recent months. The industry, however, is expecting the trend to reverse in the current quarter with festivals such as Dussehra and Diwali.