Maruti Suzuki is all set for the second innings of Alto's powerful version – K10 and this time it is coming with an AMT – Automated Manual Transmission. Surprisingly new Alto K10 looks like a wake of Celerio's AMT success party! Back in 2010 when Maruti incorporated a new powerful 1.0-liter motor with new design tweaks on Alto, it induced a new life in the decade old design of the hatch, resulting in the formation of Alto K10. This new engine in the lightweight Alto appeared to be a lethal combination giving the tiny hatch a brutal segment-best acceleration of 0-100km/h of 13.3s, it can even challenge segments above it! 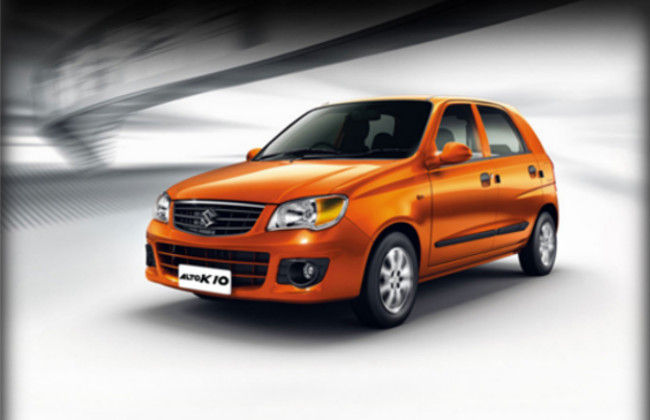 On the design front, according to the spy shots there's a complete design makeover on the new K10. Overall proportions of the hatch will remind you of Alto 800 specially from rear. Adding on interiors, dashboard is likely to get heavy inspiration from the 800, expect a spruced up version of the same. Maruti could introduce a Bluetooth enabled audio system in the new K10 like the one offered in Celerio.

The Alto K10 facelift will continue to carry K10 four cylinder naturally aspirated petrol motor. In the outgoing Alto K10, the 998cc 4-pot motor chucks out 67.1bhp of max power @ 6200rpm and 90Nm of peak torque pouring in at 3500rpm. The motor at present is mated to a five speed unit and delivers an ARAI certified mileage of 20.92 km/l. The new AMT will be similar to the one on the recently launched Celerio. Moreover, expect slightly bettered fuel economy on the new hatch courtesy to AMT and the new design.