Operational performance of Maruti Suzuki in the quarter ended June was largely in line with analyst estimates. Revenues, though three per cent less than the Bloomberg consensus estimate, were 11.6 per cent higher as compared to a year ago, on the back of a 2.1 per cent volume growth and about nine per cent growth in realisations. Volumes, which were higher in April and May by 10.2 per cent, fell in June as a fire at a plant of Subros, its component supplier, impacted production for 10 days.

Average price per vehicle sold (or realisation) increased, largely on account of higher sales of newer vehicles Vitara Brezza and Baleno, relatively costlier than older models like Swift, WagonR, etc. With Maruti ramping up production of the new models with a waiting period of six-eight months, expect realisations to remain firm.

The company continues to benefit from the shift towards petrol vehicles, which currently account for 59 per cent of the sector sales; for Maruti, the number stands at 70 per cent. The shift can also be seen, given only 20 per cent of Baleno sales are diesel-powered. The worry for Maruti continues to be small car segment sales, which is witnessing a declining trend. 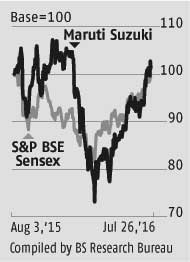 Operating profit was 2.2 per cent higher and in line with the estimates. Higher raw material costs, sales promotion and royalty costs pegged back the operating profits. Cost reduction efforts and lower depreciation costs helped improve overall operational performance. Margins, in line with expectations, fell 136 basis points to 14.8 per cent. The key reason for higher costs was the adverse currency movement (a stronger yen), which impacted imports and royalty payments. Some of the forex impact will be felt in coming quarters, as the impact of indirect imports (by vendors; at about 10-11 per cent of sales) comes with a lag of a quarter. The management, however, highlighted that price movement of commodities is a bigger concern (than royalty), as any measures (import duty) on steel could push up costs for Maruti.

At the net level, performance was boosted by higher other income, largely from its investments in mutual funds. Net profit was up 23 per cent to Rs 1,486 crore against a consensus estimate of Rs 1,224 crore.

Maruti is well-placed to benefit from the shift to petrol-driven vehicles, favourable product mix and launch of new utility vehicles and improving distribution network.