Maruti Suzuki India (MSIL), the country's largest passenger car maker, set to start production from its Gujarat plant in early 2017, is also preparing for a second assembly line at the site by 2019.

Sources say the company is likely to make its upcoming compact crossover, the Ignis, in the Gujarat plant, and also its Baleno hatchback. The Ignis is also expected to be made at its factories in the National Capital Region but, the source said, with the proximity of the Gujarat plant to ports, the crossover's export units might be made at the site.


Market sources also indicated the new-generation Swift, expected to debut at the Geneva Motor Show in March 2017, could also be made at the plant. This could not be confirmed with the company.


As for the Baleno, the company has ambitious plans for export. It is currently shipped to France, Denmark, Germany, Greece, Hungary, Iceland, Italy, Japan, Netherlands, Poland, Spain, Sweden, Switzerland, Chile, Israel, England, Nepal, Bhutan, Austria and Australia. The aim is to export the car to around 100 countries and so, Gujarat is the locale for making the model.


When asked, a company spokesperson, said, "Other than the Baleno, other models are yet to be finalised." And, that the Gujarat production would be for both, the home market and export. The share of export had not been finalised. 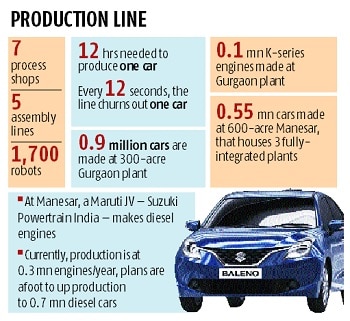 MSIL saw a slowing in its October sales, a 2.2% year-on-year rise in overall volumes. An MSIL spokesperson had told Business Standard in August, "Our plants are running at full capacity. Our combined capacity is 1.55 million cars a year at the plants in Gurgaon and Manesar in Haryana. This can at best be stretched to 1.57 million."

Analysts say MSIL is likely to exhaust the 250,000 units per annum capacity of the first assembly line in Gujarat in less than two years. The company's Japanese parent, Suzuki Motor Corporation (SMC), has decided to put another Rs 6,500 crore into the Gujarat plant for a second assembly line, to add another 250,000 units annual capacity.


On exhaustion of capacities, a company spokesperson said, "It depends on how the market evolves over the next two-three years. At present, going by the current double-digit growth levels, the second plant should start operations around the beginning of 2019."