Maruti, M&M stand out in a poor quarter 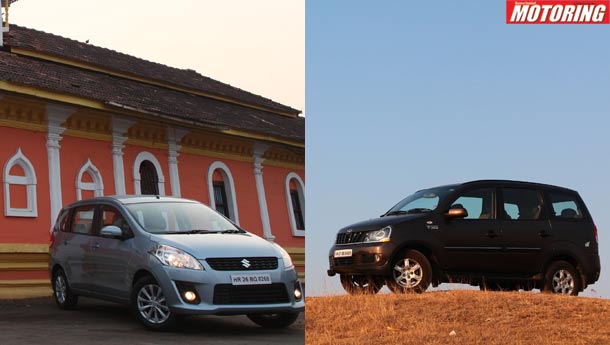 On the back of higher realisations and volume uptick from Maruti Suzuki (MSIL) and M&M, the auto sector is expected to report a revenue growth of 14-16 per cent year-on-year for the December quarter. However, volume growth may drop to lower single digits if the two companies are excluded as a slowing economy dented sales of most players. Margins are expected to be flat or slightly positive year on year but are expected to look up sequentially due to richer product mix and scale benefits. Net profit growth is likely to be in higher single digits driven by Maruti and M&M. Most analysts are positive on Maruti Suzuki and Tata Motors. Going ahead, demand is likely to remain under pressure in the March quarter but is expected to perk up in FY14 on the back of easing interest rates, says Yaresh Kothari of Angel Broking.

Muted volume show
The quarter has not been a good one for the auto sector with most players reporting a fall in volume growth as festival sales momentum fizzled out. In fact, volume growth for the auto space for the nine months ended FY13 is expected to be under five per cent due to slowing sales in the medium and commercial vehicle space, tractors and passenger cars. The volume growth number is positive largely due to the performance of the utility and light commercial vehicle industry which posted growth of 37 per cent and 17 per cent for the FY13 year to date. Two wheelers, too, grew just four per cent and except the 110-125 cc, all the segments in the space reported a fall in growth. While the scooter segment has so far grown upwards of 20 per cent, expect the motorcycle segment growth to continue its poor run due to a slowing economy and rise in fuel prices.

Revenue growth led by MSIL
The 14-16 per cent growth in revenues estimated by analysts is a combination of volume growth and realisation gains of seven per cent each. Due to workers strike at its Manesar plant last year and loss of sales, MSIL numbers for the December quarter look higher compared to peers with sales growth of 40 per cent. Exclude MSIL from the list and revenue growth is likely to be only five per cent, estimates Gaurant Dadwal of Nirmal Bang Research. In addition to higher net realisations on the back of superior product mix at MSIL as well as M&M, favourable currency movement will also pay a role in improving revenues. The Indian currency depreciated nine per cent and six per cent against the pound and dollar, respectively.

Margins to improve sequentially
While margins are expected to remain at the same level when compared to the year ago period, they are likely to improve on a sequential basis. Hitesh Goel and Vinay Kumar of Kotak Institutional Equities Research say that the improvement in margins will be driven by operating leverage benefit, stable raw material costs and improvement in the product mix. They expect M&M and Maruti Suzuki to outperform peers due to a richer product mix and strong revenue growth. Higher sales of diesel units in their product mix and strong volume growth have led to increase in average selling prices for these two companies. While Maruti is expected to see a earnings before interest, depreciation taxes and amortisation improvement to the tune of 140 bps, M&M is expected to post gains of 50 bps. Kotak analysts believe that going ahead, volume growth, coming on the back of slowing sales post the festive season, could be impacted if the prices are hiked by companies as indicated.

On the earnings growth front too, Maruti and M&M are expected to post robust gains on the back of low base (Maruti), volume growth and higher Ebidta margins. Both Tata Motors (standalone) and Ashok Leyland, which have seen slower sales due to the economic slowdown, are expected to post losses in the quarter. On the two wheeler front while, expect a fall in profits for Bajaj Auto and Hero MotoCorp.