Suzuki promoted Maruti ended 2017 with a market share of 49.9 per cent against 47.3 per cent in 2016. This is the highest share seen by the company in over a decade. Maruti's gain is helped by the 15 per cent growth in domestic sales (to 1.6 million vehicles) on the back of demand for its popular models like Baleno, Brezza and the new Dzire (launched in mid-2017). Since the domestic market grew at around nine per cent last year, only those with a higher growth managed to gain share. Therefore, companies like Hyundai and Toyota expanded sales but did not expand their market size. 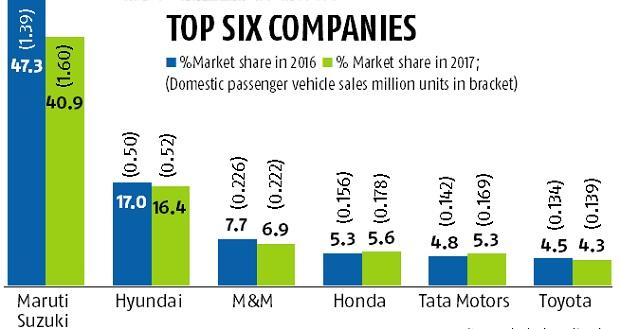 
Korean auto major Hyundai, the country's second-largest car maker, expanded sales by over five per cent in 2017 to 527,320 vehicles in the domestic market. However, the company is facing a capacity constraint (its plants operated at 98 per cent in 2017) and it is visible in the single-digit growth. Hyundai will have to be content with single-digit growth even in 2018. Rakesh Srivastava, director (sales and marketing) at Hyundai, said that the company has clocked growth every year in recent history unlike the volatile performance of a number of peer companies. The company launched its new Verna sedan in August last year.


The third-largest player, Mahindra and Mahindra (M&M), saw a two per cent decline in domestic sales during 2017 and that also brought its share down to 6.9 per cent compared to 7.7 per cent in 2016. M&M did not launch any new product in 2017.


Japanese car maker Toyota also did not launch any new vehicle in India last year but grew volumes by four per cent and closed the year with a 4.3 per cent share, down from 4.5 per cent in 2016.