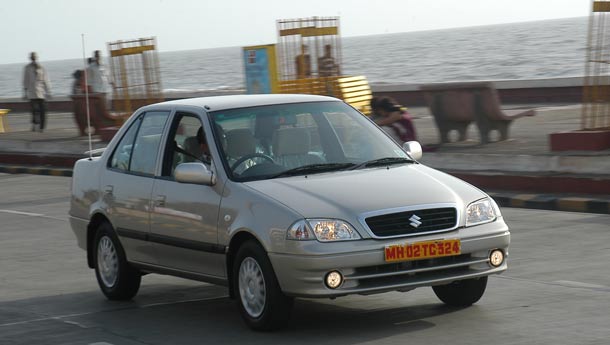 Maruti want you to fall in love again. No, don’t tell the wife just yet – they only meant the car. The new, facelifted Esteem is here, and the tagline for the car is, ‘Fall in love again.’ Let’s see. Loving the Esteem again might not be the easiest thing in the world. We like the car for its strengths – a refined and responsive petrol engine, all-around reliability, and fuel economy. But the car, derived from the Suzuki Swift of the late-1980s, is getting really old now. The Esteem doesn’t ride or handle very well, its back seat isn’t a particularly comfortable place to spend time in, and the styling looks its age.

Against more contemporary competition, the Esteem also loses out in important areas like compliance with safety norms, and crash-worthiness.Maruti, however, aren’t ready to give up on the Esteem just yet. That car has served them well for a long, long time. The Maruti 1000 got an engine upgrade – from 1000cc to a 1300cc unit – in 1994, and got the Esteem badge. The car’s interiors were revamped in 1997, and it got fuel-injection in the year 2000. Now, the Esteem has been given another makeover and a big, fat reduction in price. All of 1,75,000 Esteems have been sold in the last 15 years, sales actually climbed by 11 per cent in 2003-04, and the car was rated ‘Best entry level mid-size car’ in the JD Power Initial Quality Study last year. According to Maruti, the feedback they get from customers is that the Esteem’s performance, fuel efficiency and cost of ownership are best in class, but the styling is dated. The ‘new’ Esteem is supposed to remedy that.

To begin with, the exteriors. At front, you’ll notice an all-new front bumper, with integrated foglamps and revised airdam. The clear lens headlamps are new, and so is the chrome grille (which might not appeal to everyone) and the very prominent ‘S’ badge which rides on that grille. Apart from new cars, Maruti know the Esteem might also be up against used Honda Citys and Mitsubishi Lancers, so that large S badge is probably there to reinforce the Suzuki/Japanese car connection. Other changes are a slightly raised noseline and a new taillamp cluster. JK Ultima XPS 175/70 R13 tubeless tyres (only on the VXi) and a rear spoiler are now standard, while alloys are optional. So what does it all add up to? Umm... this is a mild, nip-and-tuck job at the end of the day, and the new Esteem doesn’t look very different from the preceding model – the lines are simply too old to suddenly start looking fresh again. That said, the lines are as inoffensive as ever, and there’s a certain air of relaxed reliability about the Esteem which some would find endearing. You know it’ll always get you back home.

The interiors have also been given the once over. The fabric upholstery looks and feels plusher than before, the white-faced instrument console and chrome-topped gearlever look sporty and the cabin generally looks better put together than it used to be on older Esteems. The whole plot still looks decidedly mid-90s at best, and the Esteem is still cramped for space and legroom at the back, but at the price it’s now being offered, it makes for a good package deal.

The real action is where it always was – below the hood. The Esteem’s 1298cc inline-four produces a very usable 85 bhp and 10.8 kgm of torque,which, combined with the car’s five-speed manual gearbox, makes for a car that’s happy burning rubber at stoplight GPs. The lithe little Suzuki can sprint from 0 to 100 kph in 11.93 seconds, and hit a top speed of 165 kph, which is not bad for a budget-end family saloon. I mean, the way this engine spools up, and revs to the redline like a maniac – and the fruity sounds it makes while doing all this – has got to be worth something for the enthusiast. For fans of frugal, the age-old, 57 bhp IDI diesel is still being offered on the Esteem, but unless fuel economy is your only concern, you’d be well advised to stick to the petrol.

(If you simply must buy a diesel Maruti, it would be best to wait till they bring out their new range of common-rail diesel engines, which should happen in the next 12-18 months.)Finally, we come to the best bit – the price. Depending on the variant, the new Esteem costs anywhere from Rs 4.41 lakh (petrol, base model) to Rs 5.09 lakh (petrol, range topper). At these prices (a drop of Rs 50,000 on an average), the Esteem is moderately attractive. If you have to have the diesel, the Esteem Di still costs Rs 5.14 lakh, ex-showroom, Mumbai. But bear in mind, it’s still an old car. In areas like ride comfort, cabin space, handling, braking, styling and safety, the Esteem lags behind its competitors. Then again, for some, the Esteem’s combination of engine performance, fuel economy and reliability, plus the reduction in price, might be irresistible. In fact, if you aren’t careful, you might even fall in love with the Esteem all over again...