The country’s top car maker, Maruti Suzuki, is now bigger than the rest of the industry put together for the first time in over a decade. In the first two months (April & May) of the current financial year (FY17-18), the company sold 274,329 passenger vehicles (cars, vans and utility vehicles) in the domestic market, about 19,300 more than the 254,930 units sold by the rest of the industry players put together. Maruti clocked a volume growth of over 19 per cent in these two months, much higher than the industry’s growth of 12 per cent.

The sales of April-May gives the Suzuki-owned company an unusually high share of 52 per cent in the world’s fifth-largest car market. Its closest competitor and second largest player, Hyundai, has a share of about 16 per cent and grew sales by less than four per cent in the two months. Maruti’s corresponding market share in April-May of FY17 was 48.6 per cent. However, the full year share in FY17 stood at 47.3 per cent as the company lost some production in June owing to disruption in supply of air conditioning units.

Maruti Suzuki, which faced a capacity constraint last year, has been able to sell more vehicles to dealers after the inauguration of parent Suzuki’s plant in Gujarat in February this year. Chairman R C Bhargava is cautiously optimistic. “The market share fluctuates on a monthly basis. We have to wait for the entire year to see a trend. The demand looks alright as of now. Our capacity has increased due to Gujarat plant,” he said.

The Gujarat plant, which has an annual capacity of 250,000 units (in two shifts) is currently operating with only one shift. Bhargava said the second shift was expected to start around September-October this year, leading to a further increase in supply of vehicles. Three of the company’s products in the Rs 5,00,000 plus segment— Baleno, Brezza and Dzire — command a waiting period of at least two months. Forecast of a normal monsoon could also be a positive trigger for Maruti, which gets about thirty per cent of the domestic sales from the rural markets.

Going by the current indications, the company could close FY18 with a market share of close to 50 per cent or higher. In FY17, the company sold a record 1.44 million vehicles in the domestic market and shipped 122,039 vehicles to export markets, making for a total of 1.56 million units. It generated a record profit of Rs 7,337 crore on sales of Rs 66,909 crore. 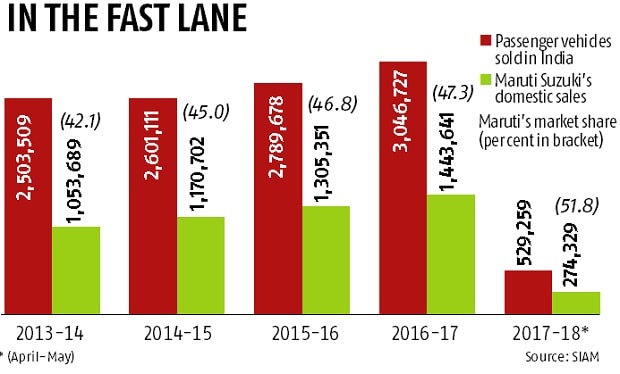