Maruti asks dealers to hold deliveries of some DZire batches 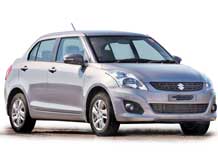 The country’s largest carmaker, Maruti Suzuki India Ltd, has asked dealers to hold deliveries of certain batches of the Swift DZire, as it decides whether to recall the cars and fix a faulty fuel tank component.

“There is a problem, but a final decision on whether the cars will be formally recalled has yet to be taken,” said a senior company executive who did not want to be named.

Roughly 100,000 Swift DZire cars on roads or in dealer lots could be defective, according to a company executive.

Jai Bharat Maruti supplied the faulty parts for these cars and sources at Maruti Suzuki said replacement costs would be recovered from the vendor.

Current rules do not require manufacturers to recall cars for technical defects. The government is framing a mandatory recall policy that could involve fines and production cuts. The policy, expected shortly, may need a new law or amendments to the Motor Vehicles Act and its rules.

Maruti Suzuki has not yet informed dealers, workshop personnel or customers about replacement of the faulty fuel tank component. “We will inform all parties concerned after taking a final decision on the issue,” the executive added.

The company declined to comment on the issue of a potential recall of the Swift DZire.

Maruti Suzuki had recalled 1,492 Ertigas, Swifts, Swift DZires and A-Stars produced in October 2013 to fix a problem in the steering column. Its biggest recall was in February 2010, when a faulty fuel pump was replaced in more than 100,000 A-Star hatchbacks. Maruti Suzuki had also recalled 13,157 diesel variants of the Swift, Swift DZire and Ritz in April 2011 to examine a faulty engine part.

BRAKED TO A HALT Sales: Rose 16.6% in 2013-14 to 197,685 units, despite a slowdown in the passenger vehicle market 100,000: The number of DZire units Maruti Suzuki is understood to be considering recalling from customers and dealers due to faulty fuel talk (replacement at dealers' end, though, can't technically be called a recall) Recalls: If the company decides to go for recall, this will be the third one for the Swift DZire (Maruti had earlier recalled 581 units in October 2013 and 4,505 units in April 2011)