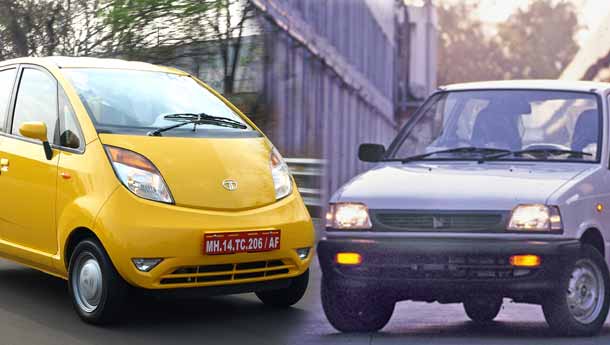 The mother of all comparisons. On one hand is the car that defined motoring in India for the last 25 years and the other that will define motoring in India for the next 25. The Nano is built keeping modern requirements in mind - such as good bottom end torque, crisp handling, better body control, ride and safety. On these counts, the Nano is a wee bit ahead of the effervescent Maruti. It's also a neat looker, something the Maruti never really boasted of. But the 800 has a couple of aces under its sleeve - such as better acceleration numbers, better top speed, a proven three-cylinder motor, great reliability and Maruti's unflappable service network. The two-cylinder motor of the Nano is loud, but the three-cylinder motor on the 800 isn't vibe free either. Both will return good fuel efficiency figures, but it's the Nano that beats it to the goalposts. That and other things should be enough to crown it a winner.