The logo of Maruti Suzuki India Limited is seen on a glass door at a showroom in New Delhi, India. (Photo: Reuters)

Despite the 56 per cent returns generated over the past year and valuations at new highs, analysts believe the Maruti Suzuki stock has more steam left. Over the past few days, they upgraded its target price to Rs 8,500–9,000 levels, which translates to potential gains of 12-18 per cent from the current price of Rs 7,602. So, what is driving analysts positive on Maruti, even as it posted a subdued show in the June quarter (Q1), especially on the margin front?


Robust July sales numbers is one factor. A strong new product line-up as well as scope for margin expansion has also improved sentiment for the stock. These factors, according to brokerages, justifies the premium valuations at about 30 times FY18 estimated earnings.


The key trigger, of course, would be revenue growth and its performance on the volume and market share front. Analysts at ICICI Securities expect 19.6 per cent revenue growth over FY17-19, nearly 70 per cent of which would be driven by higher volumes. Volume growth is expected to be strong, given the order backlog, new launch pipeline and aggressive dealer expansion. Between Baleno, Brezza and the new Dzire alone, Maruti is sitting on order backlog of 1,50,000 units with the models having a waiting period of 16-22 weeks.


New launches and upgrades, at a time when competitors are struggling to maintain or launch new models, will only help the market leader strengthen its position. Maruti’s market share in the June quarter at 50.5 per cent is 430 basis points higher than the number in the year-ago quarter. Domestic volume growth in July was at 22 per cent year-on-year (y-o-y) and growth should sustain, given the consumption boost expected from the upcoming festival season and normal monsoons. What should hold Maruti in good stead is the plan to expand its distribution reach from the current 2,250 outlets to about 4,000 by FY20. 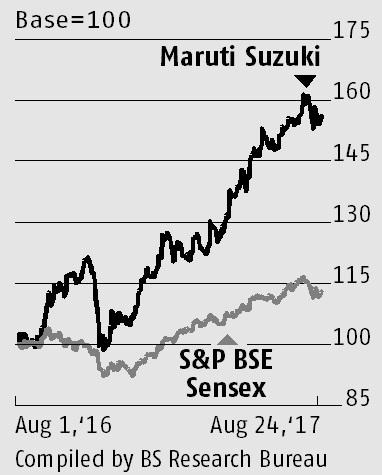 While the ramp-up at the Gujarat plant could weigh on near-term margins given lower operating leverage, payment of royalty on new products in rupee, lower discounts and better product mix bode well for profitability in the medium term. Average vehicle selling prices over the past seven quarters is up 10 per cent to Rs 4.34 lakh in Q1. Analysts at HSBC expect operating profit margins to improve by 150-160 basis points by FY20 from just under 14 per cent in the June quarter. The recent quarter saw dealer compensation, higher commodity prices and the Gujarat plant scale up costs, denting operating profit margins to 13.3 per cent, 80-100 basis points below expectations.

On the stock premium, analysts at HSBC say while valuations are at a new high, fundamentals are also at a new high and earnings growth remains solid and the most predictable in the sector. Further, they add that the stock’s relative valuations to peers remain close to historical averages and not at a premium, despite the sharp improvement in relative financial performance.