Since volumes have risen for medium and heavy commercial vehicle (M&HCV) players, one would think these are good days for them. However, that is not the case.

While volume gains are positive, a sharp rise in raw material prices and aggressive discounts being offered on commercial vehicles, margin pressures on these players are expected to be elevated. Some of the pressure was visible in the September quarter (Q2) results, with Ashok Leyland reporting a 150-basis point year-on-year (y-o-y) fall in operating profit margins to 10.1 per cent on the back of heavy discounts, raw material prices, and aggressive pricing for exports to push unsold BS-III inventory. This was despite the company raising the cost of vehicles by 14 per cent — since the beginning of the financial year — to account for the transition to BS-IV norms, as well as higher input costs.

Prices of steel, aluminium, lead, and copper — after gaining 5 per cent to 19 per cent on a sequential basis in Q2 — have added to the pressure. Analysts expect Ashok Leyland to increase prices further, given that the earlier hikes have not been enough to absorb cost pressure. The same is the case with other manufacturers. Both Tata Motors and Eicher Motors have said they would pass on a part of the commodity inflation as they did in October, while focusing on cutting costs to minimise the impact on profitability. What is preventing the companies from taking a sharper increase is intense competition, and consequently, pricing pressure that is unlikely to recede anytime soon, believe analysts. 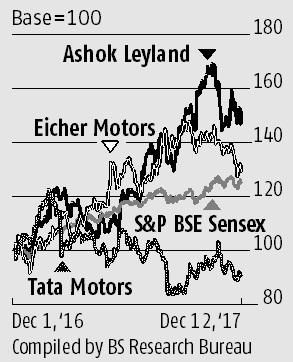 “The discounts in the market continue to remain high on an average for trucks. The discounts vary between Rs 3 lakh and Rs 3.5 lakh, which is a substantial amount — about 12-15 per cent of the cost of vehicles. In some cases, it’s even higher,” says ICRA Senior Vice-President and Group Head (Corporate Ratings) Subrata Ray. With Tata Motors focusing on improving market share in the M&HCV space by 500 bps in FY18, the pressure is likely to continue.

What could offset some of the pressure on profitability is volume growth. On a low base, volume growth for the industry was a robust 66 per cent y-o-y in November, which was way above estimates of 30 per cent growth. Given that the companies have highlighted a healthy demand outlook, led by the government’s focus on infrastructure development, analysts could increase their growth estimates of FY18. Analysts at Nomura say the government’s focus on doubling spend on road building over FY18-20 (compared to FY15-17) could be an additional demand catalyst, which could led to further upside to estimates. Higher volumes should increase utilisation levels (operating leverage), which are currently at sub-optimal levels of about 60 per cent.