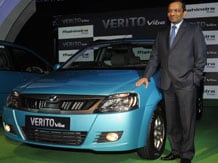 The Mumbai-based company has priced Verito Vibe on par with Maruti's best-selling premium hatchback Swift at Rs 5.63 lakh (ex-showroom Mumbai, without octroi). Swift’s entry-level model is priced at exactly the same price point in the city. The top-end version of the Vibe is priced at Rs 6.49 lakh.

Predominantly a utility vehicle maker, Mahindra has little experience in the car segment. But the Vibe’s launch has opened a path for the company to get back at Maruti Suzuki, which challenged M&M's dominance when it launched the Ertiga, a multi-seater utility vehicle.

The Vibe, which is a re-engineered Verito with an integrated boot, provides M&M a chance to address the 1.3-million units a year hatchback market, which is about 50 per cent of the domestic passenger vehicle market.

Due to lack of a small petrol engine option, the Vibe will be available only with a diesel model with three variants. The engine is the same 1.5-litre dCi engine bought from Renault, which also powers the Verito sedan. M&M claims 20.8 kmpl on the Vibe. The company is not looking at a petrol engine for the Vibe for the time being.

Work on the Vibe started nearly two years ago, a year after M&M bought its partner Renault’s stake in the joint venture company Mahindra Renault (MRPL), which used to make the Logan sedan. About 80 per cent of the parts of the Vibe and the Verito (formerly Logan) are common.

M&M made an overall investment of Rs 60 crore in developing the Vibe, said a senior executive. Only the high-mounted vertical tail lamps on the Vibe, which were developed by an Italian company, are different from the Verito.

Pawan Goenka, president (automotive and farm equipment sectors), Mahindra and Mahindra said, “We are entering into a larger volume segment with the Vibe. We are a UV (utility vehicle) player with six to eight models and one car. The Verito matches our company’s DNA of being rugged, stylish, reliable and a boot to go with.”

Under the time-bound agreement with Renault, which allows M&M to develop derivatives of the Logan sedan platform, M&M had been working on few concepts of compact car models including a compact sedan.

The agreement with Renault stretches for a ‘few more year’ with an option open to buy- out the platform itself, said an official.

“Our agreement with Renault is to have a sedan and a compact car and not anything more. We will have to go back to Renault and have fresh discussion with them if we have to do anything more with this platform,” added Goenka.

After the recent launch of the all-electric e2o, M&M is also working on an all-electric version of the Verito, which will be launched next year.

The firm has kept a production capacity of 35,000 units a year for both the models. However, according to projections, the plant may not exceed 70 per cent utilisation this year.

Despite the presence of two cars in its portfolio now, M&M does not intend to have a larger play in the segment. Instead, it prefers to maintain focus on the utility vehicle segment, which cover 20-22 per cent of the passenger vehicle market at present.

“We have maintained that other than the Verito, we do not have any specific plans to get into the car segment and that statement stands,” said Goenka.