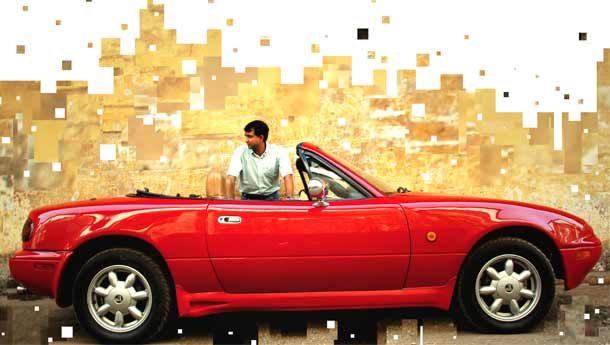 I’m sure we all have that one machine we simply must have, something that captured your imagination as a child and still continues to hold your attention as an adult. That one car or bike that you have pledged to own before you kick the bucket.

We all have one, right? Well, for me, that has got to be the Mazda MX-5 Miata. Sure, it’s not exotic, nor is it powerful, but there’s something about its sheer simplicity that gets me every time. Just imagine, one small, lightweight car, with an equally small engine powering it. Manual transmission, rear wheel drive and a retractable roof to boot. It doesn’t sound like the best of combinations, I agree, but ask anyone who’s driven one and they’ll beg to differ.

My first encounter with a Miata was when I was fourteen and our then new neighbours just happened to tow one of these little cars to their driveway as they moved in. I didn’t think much of it back then, dismissing it as a girly car, but boy was I wrong. There’s a reason my neighbour always had a smile on his face when he got out of that car!

It took Mazda nearly 10 years to go from idea to production with the MX-5 and before it, four other models were considered, hence the name, MX-5 (mazda experiment number 5). To think, if it wasn’t for an automotive journalist telling Mazda that they should build a light-weight sports car, Mazda probably wouldn’t have made the most popular sports car in history!

It stayed so true to the british roadster formula that even British racing green looks right at home on its sheetmetal!

The Miata, in stock form, anyway, would be left in the dust of even slightly more powerful economy cars, but get to a twisty road and you’ll be able to school just about any car this side of a Lotus Elise with it, all that with either a 1.6-litre (1.8-litre engine in later cars) engine that made 115 bhp! Think about it, a sports car that makes about as much power as your sedan. The chassis was so well balanced that it could do wonders with only that much power!

Yep, the Miata is it, for me, the one I must own. So, if anyone has a lead on one for sale, you know who to get in touch with!