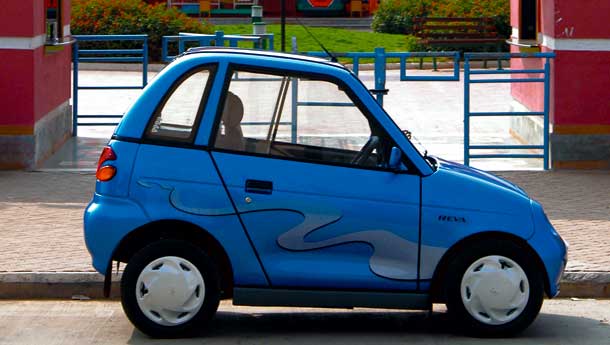 Reva. In Sanskrit, it means ‘a new beginning.’ But as of the last few years, Reva’s also stood for Revolutionary Electric Vehicle Alternative. That’s the car you see here. And if you’re smiling already, go right ahead. That’s what the Reva does best – make people break out in smiles. And point, stare and gesticulate wildly. Believe me, driving this car in Mumbai, is a riot of laughs. When the Mazda Miata came out in the US, Car & Driver said that driving it was like taking a cute poodle out for a walk. People wanted to touch it, pet it and smiled as it went by. The same goes for the Reva. I couldn’t drive it for 5 km without being stopped by a dozen people, who’d want to know where they could buy one.

And with unfailing regularity, they’d be crestfallen once I’d tell them the Reva Classe costs about Rs 3 lakh. Of course, you’d be familiar with the Reva. It’s one of those few electric cars that have actually become production reality and the best part is, it doesn’t come from Honda or Toyota, but from a small company based in Bangalore. And the company is, deservedly enough, going places. The tiny, charming little electric car has got export approval from the European Union, is now being sold in Great Britain as the G-Wiz and should be available elsewhere in Europe in some time. Creditable, eh?

The Reva’s range is limited (80 km on a full charge), but till the juice lasts, the car runs around like Mickey Mouse on amphetamines. A lightweight Mickey Mouse. Body panels are made of ABS plastic and chassis is a lightweight, triangulated spaceframe that supports the batteries and all other mechanicals. It’s an alien feeling when you switch the ignition key on, twirl a switch from ‘N’ to ‘E’ and the car glides off noiselessly. You realise, there’s no engine in the damn thing and yet you’re moving. Truly, it’s a step ahead for personal mobility. In our tests, the car went from 0 to 30 kph in just over 7 seconds and from 0 to 60 in 31 seconds flat. Top speed is in the region of 65 kph. All these performance numbers are well off even the bare-basic Maruti 800’s, but that’s not the point.

Once you’ve driven the Reva, you’ll realise that this is the ultimate solution to inner city blues. Traffic congestion? Ha! The Reva can wriggle through gaps like a large-ish scooter. Plus, it’s air-conditioned (cooling is fairly effective) and even has an FM/CD-player. Two doors, two seats (plus a bench in the back for small kids, or some luggage), total ease of use, just about adequate ride comfort and hassle-free commuting – that’s the Reva for me. On some days, traffic in Mumbai is so bad that even a die-hard car enthusiast like me dreads getting inside a car and driving the 35 km from home to office. The Reva just makes that commute totally painless. I love the car. It’s expensive to buy, but if you don’t have to travel more than 60 km a day, the Reva makes perfect sense as a second car.