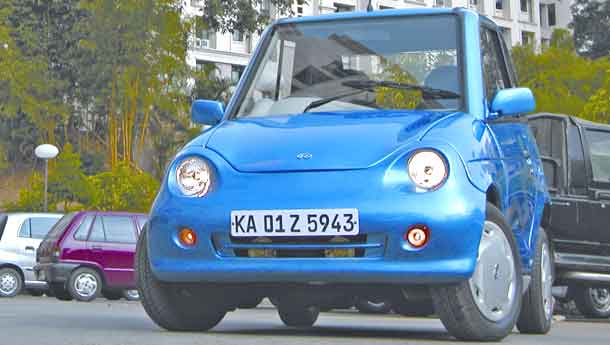 Two door, two seater , (with +2 seating for the kiddies) coupe. Rear wheel drive. Leather upholstery and steering wheel. Blaupunkt stereo. Central locking and air con, both with remote operation. Michelin tubeless, asymmetric tread, low friction tyres. ABS. Sounds expensive? So we did drive the exalted Mercedes-Benz SL 500 a couple of days ago,but this description and the story is about a car without an engine. (And the ABS in the description above refers to the car’s plastic body and not the braking system...) Welcome to the world of the diminutive, battery-propelled go-car, the Reva Classé.

The Reva’s designed for a fair bit of intra-city commuting – from home to work and from work to home, for that bit of veggie shopping, to take the pets to the vet and back, to a restaurant for a candlelit dinner for two... that kind of happily-married thing. And that’s exactly why the editor decided to throw its keys to me. Because I’m married. Because there’s a menagerie of sorts at home and a vet in the neighbourhood whose EMI payments depend on said menagerie. Because obviously, veggies have to be bought. Because I live in one city, work in another and the commute tots up to 76 km a day. And fully charged, the Reva’s good for about 60 km with air-con and stereo working. In fact, a total range of 80 km can be had if you’re on the  er... less sporty, 50 kph-tops, Economy mode, with the two sliding windows open for ventilation and your own vocal chords providing the music.

So there I was, flat-out at 65 kph, wife and 92.5 FM for company, leading a gaggle of cars and motorcycles down the Thane-bound Eastern Express highway from Mumbai. No Economy mode this time – the car was fully charged and I had only 38 km to travel. Whistles from autorickshaws, grins from a number of pricey D-segment cars, a thumb up here, a wave from a bus, and they were all keeping us in the lead of a cheery cavalcade. Grinning, waving, laughing, cheering, the whole highway seemed to have dosed itself silly on a massive cloud of nitrous oxide. Even the habitually dour-faced toll booth collector put on a winning, Bollywood smile for the machine. Hallelujah!

Honestly, the car is not that bad when it comes to city traffic – it dismisses crawl-time distances with the alacrity of an autorickshaw, occupying tiny gaps in traffic, and then squeezing ahead to hunt for more. Ride quality is not too bad for a 780 kg car with a wheelbase that’s as long as a mid-size car is wide – yes, it’s a bit choppy over broken road, but surprisingly, is still a mile and a half ahead of the bullock-cart springing of the Maruti Versa. Say thanks to a cleanly configured combination of 145/70 tubeless tyres on 13-inch wheels and a suspension system of McPherson strut, coil springs and hydraulic shock absorbers (front) and a trailing arm with pan-hard rod, coil springs and hydraulic shocks (rear). And turning radius? Tight enough to flummox even the most nimble three-wheelers around.

My wife drove the Reva and she took her friend for a short drive. Now, she wants a Reva. In summery, bushy-eyed yellow. Her friend also wants a Reva, but in this exact shade of brilliant blue, can I keep this one? And then I took my friend out for a drive. And then a neighbour and a few more, followed by a curious auto-wallah, then a kid on rollerblades and her friends too. One paan-chewing (and spitting) gentleman,
his mind strictly set on business, now wants to open a Reva dealership, while most others, across all ages, have decided to own the car. Looks like business could boom in this part of the world for the Reva Electric Car Company. And why not?

Quirky it certainly is, but the car looks  cute enough and reflects a lot of TLC from the manufacturer’s end. The body panels are extremely well finished, paint quality is top notch, legroom for two is good enough for the average-built couple, even the quality of finish inside the car can teach a thing or two to some mid-size ‘premium quality’ cars in the market. And then the Reva is easier than the legendary Kinetic Honda to live with – at least it doesn’t mandate a two-wheeled, balancing act. Two pedals – accelerator and brake, a steering wheel, a hand-brake lever, and a Sumeet mixer-like knob to move forward, or backward and to select economy mode or neutral is all there is to it. No gears, no clutch...
And then there’s the most attractive part of this story – running expenses. Nine units of electricity is all it takes to charge up the car, translating to around Rs 23 a pop, translating again to my daily commute. Compare that to the Rs 200 worth of fuel that’s needed for a petrol hatchback to do the same beat, and the savings are tremendous. No oil changes, no injector clean-ups... no hassles that are usually associated with internal combustion engines. The Reva’s DC motor is powered by eight 6-volt lead-acid batteries, and that means, apart from the occasional top up of distilled water, 3 years of driving before you might have to change the batteries. Which will cost you around Rs 25,000. ABS plastic body panels also mean a rust-free car, and easy, cheap accident repair or panel replacement too. Economical? Yes, more so than a premium spec Indian motorcycle in the 150 CC-and-above class.

The biggest glitch? Even after the recent post-budget tax cuts, the Reva Classé still costs Rs 3.2 lakh (ex-Mumbai). The government could certainly lift quite a few more levies if it wants to encourage pollution-free urban commuting. The only person who was totally unenthusiastic about my transport was the car-cleaning guy. Armed with cloth and a bucketful of water, he wasn’t going to risk it when he saw the heavy-duty, 15 amp cable trailing out of the second storey apartment window and plugged into the Reva. Good thing he didn’t have to read the owner’s manual first – there’s a bit there from which one can infer that H2O and electricity, especially of the 220 volt type, aren’t the best mixers.

As far as I am concerned, there’s another slight problem. You see, the head office in Delhi reimburses my fuel bills when I am driving a car around on a testing schedule. Now, explanations are going to be just that bit harder when I put in an M.S.E.B electricity bill for a  reimbursement claim...

MEMORY CAPSULE
WHAT?
Maini Reva
WHEN?
June 2003
HOW?
Param believed that the difference between an electrical appliance and a car is the presence of an electric socket. But what if you get a car that comes with an electric socket? Param was quite ‘charged’ about
the Reva mainly because it kept his running costs low. His only crib was that he couldn’t present an electric bill to claim fuel reimbursement! And the guy who cleans his car refused to touch it for fear of an electric shock.
WHY?
Why not?
WHAT WE THINK OF IT NOW
We wanted to do a serious story on the Reva, but we just couldn’t help it. It happens with the Reva, you see.