The growing popularity of SUVs over the last decade has led automotive purists to rethink how to tap buyers in a world where electric cars, self-drive and shared transportation have been catch phrases that influence vehicle designers, millennials and auto CEOs. Mahindra & Mahindra’s latest rendition of its dune-busting, four-wheel drive, the Thar, is a move to crossing the chasm between off-roader and city-slicker.

From a business point of view, the move was overdue given that the city SUV segment has been aggressively targeted over the years by competition that includes the Jeep Compass, Kia Seltos, the Toyota Fortuner and the Force Gurkha.

Over the years, analysts point to how sedans and larger saloons have given way to customers wanting utility vehicles that are functional and also equipped with four-wheel drive capability — something that would be even more relevant the coronavirus time when people want to make long-distance trips in their own vehicles.

The Thar’s original avatar, launched in 2010, appeared like a harder, bare-bones metal version of what a Jeep is. It was, in fact, a replacement for the Mahindra Major, or the MM 550, which was derived from historical production partnerships with Jeep. 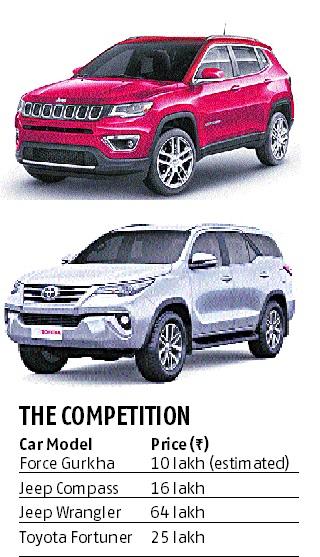 As one of M&M’s biggest launches this year, the new Thar has been redesigned aggressively with a wider stance, front-facing grille, a chunky hard plastic roof and a new body on chassis suspension that is lighter and stiffer. This city off-roader is built for comfort, which it mostly manages to deliver on.


There’s a reason that off-roaders are designed the way they are, with broad, square lines and large windows and windshields. For, when you are off-roading, watching the surroundings from every angle is key to navigating undulating surfaces. 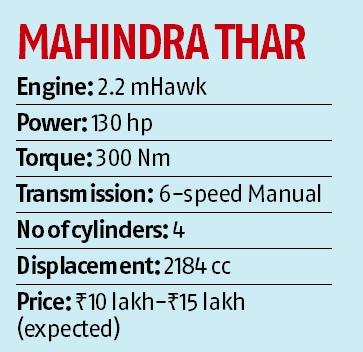 Inside, the car is more comfortable than its earlier versions, and the seating is upright and firmly positioned to access console controls. This test-drive version was a manual diesel powered by the mHawk engine, which proved to be a capable workhorse that propelled the heavy tool car onto the asphalt.


Inside, the low-ratio gearbox sits by the regular manual gear, which doesn’t let you forget that this is an off-roader. (The low-ratio gearbox takes over the drive from the regular gearbox, lowers the gear ratios so that the wheels move slower than they ordinarily would. This allows for better traction, which is important for steep climbs and descents.) Big tires, efficient brakes and big headlamps mean this is a car that is naturally infused with a sense of security for its occupants. The interiors are a quantum leap ahead of M&M’s earlier cars.


While the Thar is a pliant ride, what needs correction in later models in the ease of egress for passengers to the rear seat.


Choices in the city off-roader segment are limited. There’s the Jeep, made by the Fiat Chrysler Alliance under the Wrangler badge, which will set you back by some Rs 64 lakh. There are other similarly priced choices, like the Gurkha made by Force Motors as well as the higher spec SUVs such as the Ford Endeavor, but those cost more than the competitively priced Thar.