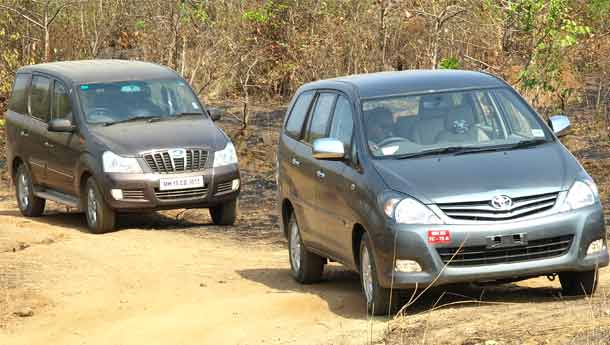 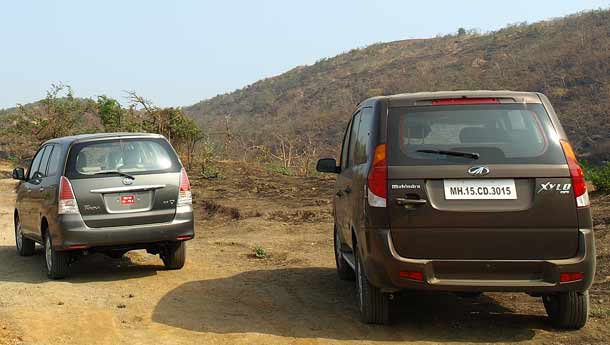 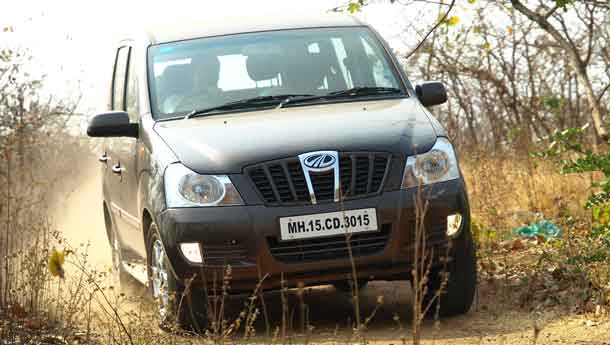 If you are the sort who reads balance sheets for fun, you don’t have to read this road test. A glance at the big book from Toyota will reveal that they have, more or less, got a grasp of building what we call cars and selling them for good money. Study the Mahindra numbers and you will realise that they have a lot more catching up to do. In short, you will know that Toyota has more knowhow, more money to spend on research and development and hence they make better cars than what the rest of the world manages. They are so good that they regularly invite other car companies to come and learn the art they have perfected. Lots of car companies try hard and fail since they cannot stomach the fish soup that Toyota force-feeds their employees every morning. Alright, that was a very poor joke. But the fact remains that Mahindra (or any other car maker in the whole world) was not going to design and develop a people mover from scratch that can beat the Toyota Innova, first time out.

And we have news… they haven’t. But Mahindra knows something about ‘frugal engineering’ (as lauded by Carlos Ghosn and Renault) that Toyota cannot concentrate on thanks to the global nature of their thinking process. That means Mahindra was able to coax their suppliers to bring the price down without sacrificing on quality and pass it on to buyers. The difference between the cars you see in these pages – the top-end Xylo and a well-loaded Innova – is close to Rs 4 lakh. Even the cheapest Innova on sale is more expensive than the most expensive Xylo. Phew. Sure, even the top-end Xylo does not offer airbags and ABS, but otherwise it has almost every bell and whistle that the Toyota has… and then some.

Toyota seemed to have sensed the new-found competition and did spruce up their ace during the recent facelift.  New grille, new front and rear bumpers and lighting fixtures have resulted in a more ‘personal’ looking Innova – especially in metallic greys and dark red (two of the four new shades on offer). New instrumentation, a multi information display, a 12-volt charger unit (at last) and steering mounted controls for the audio system make up the changes inside the Innova. And the reverse assist helps you park the bulk more easily now. The Innova is a better, more complete form to look at, while the Xylo looks truncated and influenced by too many thought processes and design schools. In short, the Innova is a good van to look at while the Xylo tries to be an SUV and an MPV at the same time and falls into a deep crevice somewhere in between. Both cars feature good fit and finish and it is indeed creditable that the Mahindra offering can stand up to a Toyota in this front. The Toyota interior may look plain Jane, but there is a certain degree of quality that is omnipresent. In comparison, the Xylo interior is over designed and is not in the same quality league when it comes to plastics and finish. The arm-rests, for example, are not aligned to each other and are operated by a press and pull mechanism that is not human friendly. Where it excels though is in the interior space department – the Xylo was designed inside-out and it shows. Unlike the Innova, the third row occupants do have adequate head and leg room while the third row of the Innova is only for the benefit of children or not-so-tall people. The seats of the Xylo are comparable to the Innova and are equally comfortable over long runs.   Both are long-haul specialists and feature diesel engines that are meant to stay relaxed over long periods of time. The double-overhead cam 2494cc diesel that lives under the bonnet of the Innova is laser proof when it comes to reliability and offers considerable refinement for a vehicle of its class. It is good for 102 bhp at 3600 rpm and develops 20 kgm of torque between 1400 and 3400 rpm. The mEagle CRDe motor that has been assigned to the Xylo has been tested thoroughly and Mahindra engineers say the engines, with proper care, can easily do 2 lakh km before requiring serious work. This 2498cc four-pot motor has more power and torque than the Innova, at 112 bhp and 24 kgm. The difference came through as we ran both the machines fitted with our Vbox equipment. The Xylo showed what good old torque and horsepower can do, and did a 6.2 second 60 kph sprint and managed a 100 kph run in just 16.4 seconds. Those are impressive numbers for a diesel van, mind you.

The Innova, on the other hand, had to stay in the Xylo’s dust trail through the rev range and managed only 7.4 seconds for 60 kph and a rather slow 20.1 seconds for the 100 kph run. Start both cars from the same point and accelerate hard and you will realise that the Innova does not stand a chance as the Xylo rockets to its 164.9 kph top speed. The Innova, with its additional bulk, tries hard and just about manages to nudge the 150 kph mark. Top speed and acceleration are not important in the market that these machines operate in, but the ability to overtake is important, and the Xylo and the Innova are almost level in this regard. In short, what the Innova loses in the acceleration and top speed fronts, it regains with critical driveability thanks to the torque spread that can be compared to that of the Xylo motor. Our road tests proved that both cars returned an identical 9-13 kpl depending on the way one drove (only highway runs will yield better mileage though). Where the Innova wins handsomely is in the dynamics department.

Despite the body- on-chassis architecture, this Toyota behaves like a large sedan rather than a van. There is practically no pitch or body roll to complain of, while the Xylo tends to respond like a cradle to the slightest of brake or accelerator inputs. After a while behind the wheel, you will be piloting the Innova just like a rear-wheel driven sedan – even carrying a good amount of speed into corners. The 205/65 R 15 tubeless radials compliment good road handling and are a nice enough accomplice when you want to carry eight-odd passengers and their luggage and still manage decent average speeds. Better body control also translates to less fatigue to the passengers, and that is a reason why people ask for Innovas when they hire vehicles (ditto the Volvo buses).   The Xylo is much more sorted out than the Scorpio when it comes to dynamics, but its road manners get exposed when driven back-to-back with an Innova. What the Xylo is good at and beats the Innova hands down is in the off-roading department. As our pics explain, we did an impromptu off-road hill climb (our very own Pikes Peak?) with both these cars. To be honest, the terrain belonged to genuine 4WD articles, but we decided to see whether these two could reach the precariously mounted Siddheshwar temple (off Thane, Maharashtra on the way to Nasik). The road was incredibly loose and steep and the Innova struggled a great deal yet reached the top. The Xylo’s SUV genes and 215/75 R15 all-terrain Bridgestones came to life and it ran up the mountain like a goat. It even looked like one while at it, but that’s another matter all together.

The Innova is a more sorted out vehicle here and one that should win our road test comparison. But as you have seen, the Xylo can seat as many, cover distances at ease, can out perform the Innova effortlessly and it costs way less. If you are buying the Innova as an alternative to a sedan, you should go ahead with the decision since you do get safety features. Most other buyers, fleet operators included, will look at the entry-price advantage – who can negate the Rs 2 to 4 lakh savings? Normally, our road testers don’t consider the price-tag when proclaiming a winner of a shootout. But in this case, Mahindra has ‘out-numbered’ Toyota, if not outwitted them. ‘Mahindra beat Toyota’ is not something you would normally hear, but here it is. The Toyota Innova is certainly the better car, but the Mahindra Xylo is definitely a better buy.