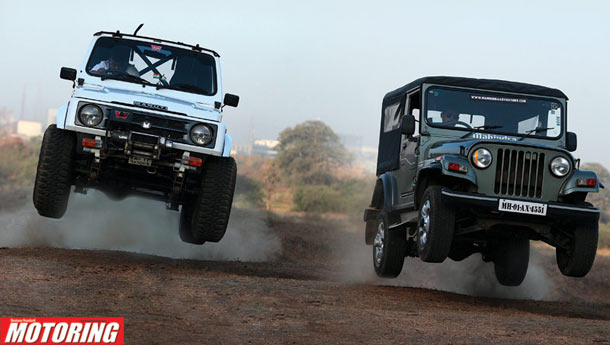 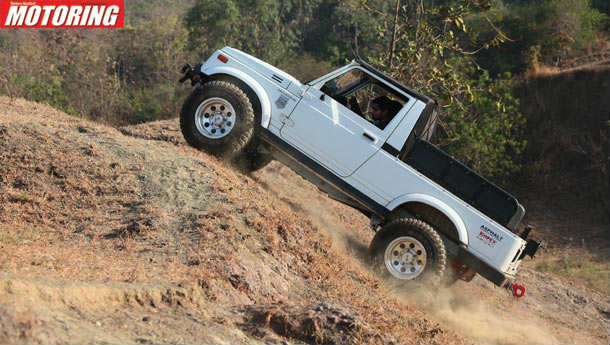 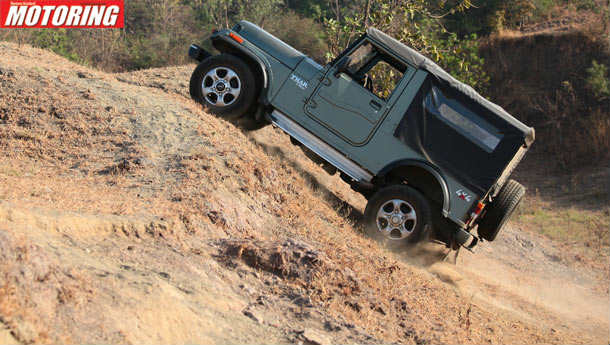 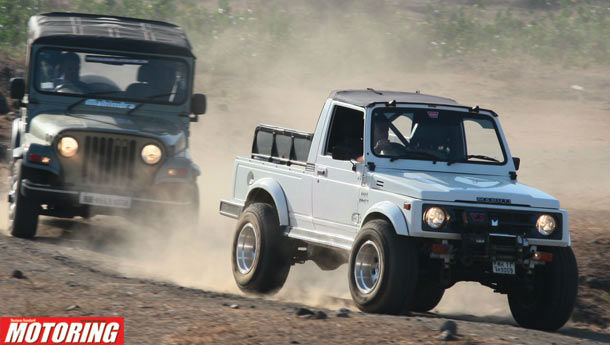 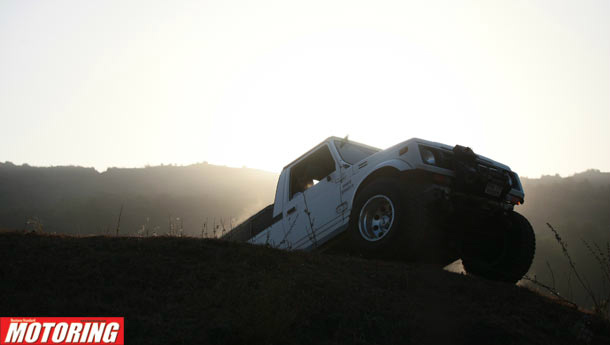 My last story involving the Gypsy and an MM 540 DP was an orgy of personifications. I’d said that if the 540 were a man, it would have no  friends, would chop down trees for a workout, drink beer with rocks in it and would have a pack of Alsatians for family members. I can’t however say the same about the Thar. The Thar, if it were human, would have many friends, would have any kind of job in the world that didn’t involve the cutting of trees and would drink things made in Russia even. He would also have dogs, but as pets rather than as 3am buddies armed with rusty weapons. The only thing I won’t change from that story is my supposition about Chitrangada Singh being way more fun to do mad things with on a beach, something I am only too willing to verify for the sole benefit of information and knowledge to you, our dear readers.

However, I will try to not let the gorgeous woman steal the thunder of these two very capable off-roaders. So,the Thar then. To give you a quick introduction, the Thar is the off-roader for the urbanite. You don’t need forearms the size of a small country to handle it. It has power-assisted steering, and delivers 13 kpl if you ask nicely. To top that, it has four-wheel drive with 4-high/4-low options, comes with a canvas top, and has a contemporary 2498cc CRDe motor. All of this, of course, isn’t just there to make the specification sheet look good. All of it works efficiently with a uniform percentage of things left to be desired – a convenient channel into the world of customisation, I say! The Thar impresses me no end and except for the lack of high-speed stability (it’s sort of scary, but fun) and certain plastic bits on the interior, I’m all for going out there and buying one. Dismissing the Thar because it’s got a pathetically placed wiper stalk is like saying you don’t want to take Scarlett Johansson out to dinner because she has a runny nose.

But here’s the deal. For about half the price of the Thar, you could get your hands on a used Gypsy (which too, you can buy new, but more on that later) and spend the other half on speccing it up. The tyres on the Gypsy in the shots for example, cost roughly twelve thou each! So if you opt for suspension upgrades, wider wheels and tyres, and an air-con apart from some more creature comforts, it’s not too difficult to blow up a lakh or two. Ideally, we should have pit a brand new fully stock Gypsy against the Thar in the name of absolute fairness although finding a Gypsy demo car is more difficult than Finding Nemo. Fortunately for us, our friend from Xtreme Off-roaders, Ibrahim Saudagar, showed up with his low-mileage number (its all-stock, save for those tyres, shackles to increase the ride height by a reasonable margin and a louder exhaust – and it’s still under warranty!) and saved the day! So to get to the point a bit quickly, which of the two is the best buy? Of course, you must consider that ‘value for money’ in this comparo includes off-roadability as standard – you don’t buy off-roaders to go mall-hopping. Which is why, we decided to put the duo through a set of four tests to evaluate their off-road worthiness.

I’m usually game to go airborne on motorcycles, but cars, I’m not so sure. Okay, I’ve tasted high-speed millisecond hang-time on tarmac thanks to a couple of softly-sprung Volkswagens, but this is different. For me, this was a scale of happenings I’d never seen before and then to be instructed to do it brought me much closer to God than I’ve ever been, though not too close for comfort, as is evident by the fact that I’m still writing this story. For those who want to try this at home, figuratively speaking of course, remember the words ‘never at an angle’ and ‘gun the throttle'.  What happens if you fail to comply on either count? Well, you either end in an awful landing, or don’t take off at all. Not cool, no? Anyway, let’s get this straight – the Gypsy has leaf springs all-round whereas the Thar has an independent front suspension with leaf springs at the rear. What this means is that the Thar is way softer whereas the Gypsy has always enjoyed its reputation of being a backbone crusher. And in yumping country, this translates to the Gypsy being easier to yump although on landing, it tends to bounce back a few times. The Thar takes off easily too, but thanks to the suspension dive, slows proceedings down once you hit the ramp (something you have to counter with extra throttle) and once you land, the tyres scrape the insides of the fenders. Anyway, both can yump spectacularly although word is the Gypsy can withstand yumping longer than the Thar. We didn’t verify that, of course.

Result: A flying Thar is so spectacular, but the Gypsy’s been doing it for ages!

Alright, the Gypsy had the advantage in this round thanks to its off-road spec tyres. Ibrahim tells me the Thar, with its heavier clutch, minimal overhangs, and torque would definitely fare better if it were shod with the right kind of tyres. In its current state, the Thar evenly matched the Gypsy, except for one bit where the former simply lost traction and kept spinning its wheels, with one absolutely petrified driver (I’m not saying who) hanging onto the steering wheel for dear life. Oh, and we’re talking about climb angles that aren’t too different from scaling walls. For someone who had limited faith in how much a car could be pushed off-road, this was an eye-opener. Of course, all of this needs a certain degree of discipline to be maintained – you can’t just point at things and jam the throttle – before it gets anywhere close

Result: Thar’s got the torque advantage, Gypsy’s got the stiffness. Better tyres on the Thar, though, will make a world of a difference.

Here, the Thar comes out tops although this time it was the Gypsy that was at a disadvantage thanks to its massive tyres. However, when it came to posing for the camera with one wheel in the air, the Thar couldn’t manage much thanks to, again, its road-spec tyres that would just keep spinning away on the loose surface it had to scale. Now, in realistic everyday driving, you don’t need the kind of articulation we’re talking about, but off the road, it matters. And then there’s that enticing thought of being able to, someday, show one of your more appropriate fingers to all that bumper-to-bumper traffic and drive over the divider, taking the south-bound to Goa instead.

Result: Gypsy wins, but it would have been otherwise if it was wearing stock tyres.

Let loose on a playground full of obstacles and long, endurance-style flats and it’s the Gypsy that’s superior. It’s stiff, has a zippy petrol motor and handles like a rally car as compared to the Thar. The Thar is soft, the diesel motor quick and fast, although the handling is not as poised. Having lived with it for twenty-two years, I have an emotional connection with my spine. So, naturally, I love it very much and will do much to preserve its sanctity (which is a bit dodgy thanks to some wheelies-gone-wrong, actually). I’ve no aspiration to set up a rallying career and I’d rather all that ‘stiff’ and ‘zip’ went into a motorcycle instead. It’s the Thar for me, then.

Result: This is personal, really, but the Thar’s come out tops.

At this point, it is important that I tell you, the difference between the two is more a difference in character than in figures. Both are equally capable and both have their own sparkling highs and few negatives. Really, your buying decision solely depends on what you want out of your off-roader. I need mine to be entertaining enough in slush, climb a few small hills for Facebook’s sake, and take me to faraway coastal towns when I feel the urge, while also being my commuting alternative when I, for some awful reason, can’t ride. So it’s the Thar for me, then. What it lacks in terms of rallying pedigree, it makes up for in diesel economy (the Gypsy’s a petrol, so...). This justifies the Thar’s ` 6.35 lakh price tag too. A fresh off the factory BS4 soft-top Gypsy carries a ` 5.86 lakh (all prices ex-showroom, Mumbai) sticker price but a petrol engine isn’t making its home in my garage unless it comes with a three-pointed star or a raging bull on the hood. Performance-wise, both cars are absolutely at home with abuse and that you can buy a production car with these virtues for the price of a premium diesel hatchback is really, really juicy. For the day out on the beach, however, I’d still rather have Chitrangada Singh...