Mahindra is bringing a coupé-SUV concept for masses, it is expected to sit above the XUV500! 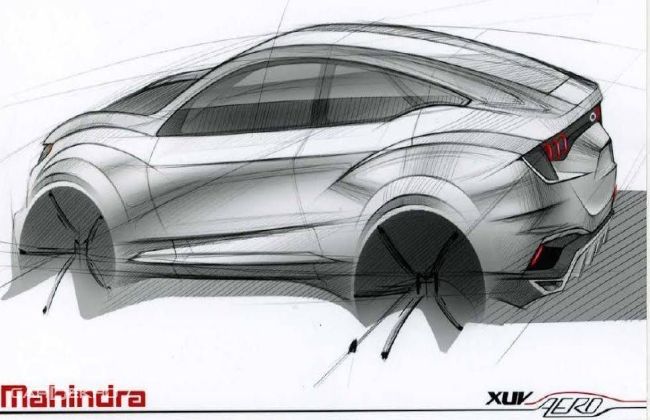 Mahindra has teased a coupe-crossover concept, christened as XUV Aero Concept. The concept will make its world debut at the 2016 Auto Expo in February first week. The company has said that the concept has been designed in-house by Mahindra's designing team. The team which is also responsible for the current XUV500, TUV300, KUV100 and of course the Scorpio. The production spec model is most likely to sit above the XUV500 similar to what Mercedes is offering currently with GLE  and GLE coupe   in the country. Until now, the coupe-crossovers were restricted to high-end luxury segment, Mahindra becomes the first mass-market manufacturer in the country to offer it!

Speaking of its silhouette, Mahindra has attempted a coupe crossover with the XUV Aero concept! It features subtle resemblance with XUV500 like the protruding wheel arches and fatty front and rear fenders. The interesting bit of the concept is the sharply raked roofline featuring massive rear windscreen. The rear profile ditches Mahindra’s regular Christmas tree layout taillamps for a horizontally placed ones and they are probably connected. The rear bumper comes with faux diffusers and features twin exhausts. Deducing from the sketch, the vehicle rides on massive five-spoke alloy wheels on low profile rubber. The automaker has not released the front profile of the vehicle but it is expected to be equally flashy!

Mahindra has also revealed that XUV Aero Concept will come with all the futuristic connected technologies which are expected to filter down to Mahindra’s portfolio eventually.