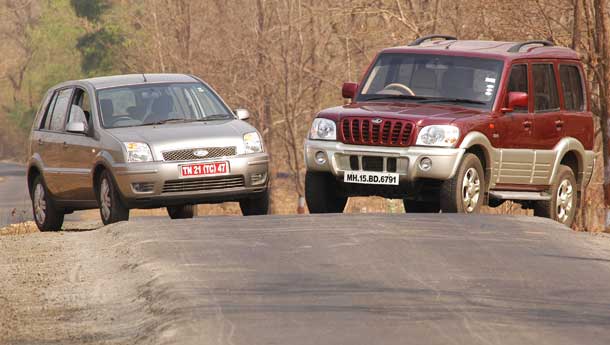 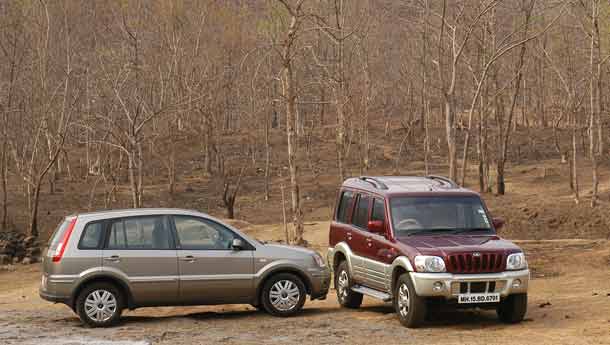 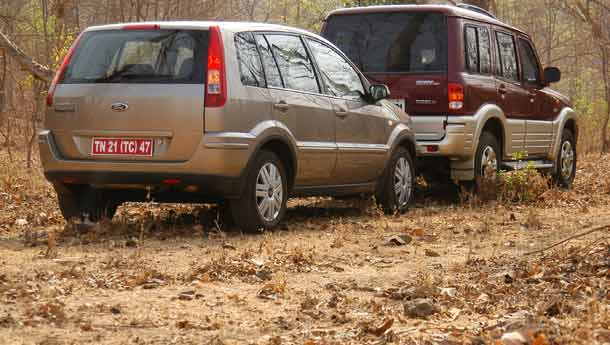 ‘Holiday is over. Time to work again.’ This is what came rolling out of my fortune cookie on precisely the last day of my three-week vacation. I thought to myself – it couldn’t have arrived at a better time! Following the cookie’s instructions religiously, I dragged myself to work the next day. But my soul was still in South Korea, happily holidaying in, sorry, Seoul.


But guess what, in this case, the real holiday for me had just begun as I had the best of both worlds at my disposal – an obedient, well-bred kid that sips petrol and a burly, rebellious teenager who burps on diesel. The choice was mine and it was between the smooth operator and the one who made a boisterous cry about almost everything. You see, I am a girl and as the gallant ones amongst you would agree, girls can have everything and I took, well, both. Alright, let me present the Ford Fusion+ and the Mahindra Scorpio CRDe – yes, I agree with you, both as different a case as Diana and Camilla. So the road test brief given to me had these elements – front wheel drive vs rear wheel drive, petrol vs diesel, refined vs aggressive.

I know exactly what is running through your head. Guess it’s about time I put your obvious query to bed. Yes, perhaps it’s unfair to measure up an SUV against a hatchback. No... a mini-SUV. Er, an SAV. Or is it a car? What the heck! As the name rightly suggests, it’s the ‘Fusion’. Even though one is a thorough SUV and the other more like a phantom of an SUV, it won’t be entirely erroneous to compare the two because they both come for the same price. The top-end models of both (which is what we tested) come for approximately
Rs 7-8 lakh.

So, what do you fancy? Of course, the Scorpio has already earned that extra brownie point by being a diesel (and one with the common-rail suffix too). And hence, a more economical choice. Whereas, even though the Fusion, drinks petrol, it’s not a guzzler. The advantage, however, is that the Fusion with its easier clutch and overall refinement, has the capacity to calm you down after a stressful day at work. Whereas, the diesel does clatter around and its various controls test your muscles. And then you have to live with the turbo whine at most speeds.   But that’s a hidden trait in the Scorpio. It’s not something you realise when you’ve just kindled the engine. Unlike other diesels, this Scorpio’s new engine doesn’t tremble like an old boxer with Parkinson’s when ignited and settles into a nice idle. But its true character is revealed only when you slot it in first gear and go for it.Yes, I sunk the throttle of the Scorpio CRDe into plush carpeting. The Indian SUV completely stirred my innards, just what I needed to wake me up and throw me back into existence. Suddenly, Seoul was a distant memory. Trust me, there’s never a dull moment in this CRDe. You can sense the bumps and jolts beneath, but the good old leaf-sprung rear suspension does not provide an obtrusive ride. As the speed builds, it literally becomes a ‘task’ to manage this enormous piece of metal on four wheels as it keeps flying off the handle. But the one thing to the Scorpio’s credit is that however bulky or laborious it might be to drive, it still somehow feels like a city vehicle – easy to manoeuvre and light on the steering. But if you are doing a neat 120 kph, this CRDe can become quite buoyant. Go ahead, call me a girl, but I have already driven some very fine, fast automobiles and I think the Scorpio handling can be further fine-tuned.

If the Scorpio took my mind back to rollercoaster rides, the Fusion reminded me of Roxette’s famous number Joyride. As I said before, Ford couldn’t have coined it more aptly. The Fusion is truly an amalgamation of characteristics like elegance, aesthetics, congeniality, style and class – all the features that make it a perfect family car. And it’s also an answer to all those people who wish to own a car that imbibes the traits of an SUV. Well, they also get a bonus point here because the Fusion even looks like a mini SUV; tall seating position, versatile seating, et al. The Scorpio, too, is amongst the best-looking SUVs in its price band, but its robust features don’t allow you to think of it as a vehicle you would like to enjoy driving on a daily basis.

The one important area where the Fusion beats the Scorpio hollow is the gearbox and the ratios, which I think are good enough reasons to buy the Ford. Typically, having to shift gears repeatedly is the most tiring exercise while driving any car. (Petrolheads out there remember, ‘repeatedly’ is the operative word here.) Sure enough, you need to do a lot of that in the Fusion as well but the impact felt is almost zilch. Maybe Ford fills the Fusion gearbox with butter, it was that smooth and it made the overall driving experience ultra slick. This is one car in which you don’t care whether you are driving on congested roads or on a freeway. It doesn’t change colours. Of course, a freeway is more inviting as it allows you to the freedom to glide. In the Scorpio, however, though the gearshift is almost seamless, there are still a few rough edges that need to be ironed out. Maybe Mahindra used chunky peanut butter instead of the real thing.   Though the Scorpio can be a bit cumbersome while going around the corners thanks to its body-on-chassis construction, the Fusion’s monocoque skeleton and underpinnings built and fine-tuned to corner efficiently. It does not take time to understand who spent more money on getting the vehicle dynamics sorted out. Back to school, Mahindra. But as far as the interiors go, the Scorpio tries to impress you more and hence is a notch above the Fusion. Our test Scorpio came wearing comfy leather seats with armrests, leather-wrapped steering wheel, leather ‘coin pad’ and even a air-purifier dispenser (the last mentioned is an optional extra, of course). On the other hand, the Fusion’s well-designed, multi-textured yet plasticky interiors are a mismatch with the otherwise excellent package. The dismal-looking fabric of the seats is a straight put off. But the plus is that the Fusion’s rear seats allow you the luxury of a business class experience. Well, as close to it as possible.

Then, the Fusion has these little pigeonholes that seem to have been placed in the car without any thought behind them. And not one of them can hold either a bottle or a glass. So, maybe they are all meant for keeping your change, separately – one for Rs 2 coins, another one for Rs 5 coins perhaps? Another classic example of waste of space in the Fusion is the air-conditioning panel which consists of three bulky knobs, something that could have been easily reduced to three electronic switches, occupying one-third the space. Maybe that would have pushed the price beyond the ‘red’.

In the Scorpio, the interiors, though large and oversized, are thoughtfully designed, and more importantly, for a purpose! As far as ergonomics go, Ford has been plain lazy. The Fusion carries a few left-hand drive features which become a nuisance. For example, to release the hood, the driver has to literally lean over the fellow passenger sitting on the left side and then pull a knob on the floor. Then, the lack of space in the footwell is quite a pain in the foot. But then, since it’s Ford, I guess one can afford to ignore such small glitches.

Our bike man Shumi wants to add another negative to the Fusion’s otherwise positive fortune. He griped about how the Fusion’s CD player refused to play his MP3 audio CD, while the one in  the Scorpio played it just fine. Shumi, music be damned, the Fusion is about fine taste, while the Scorpio is an acquired one. Maybe that was the problem!