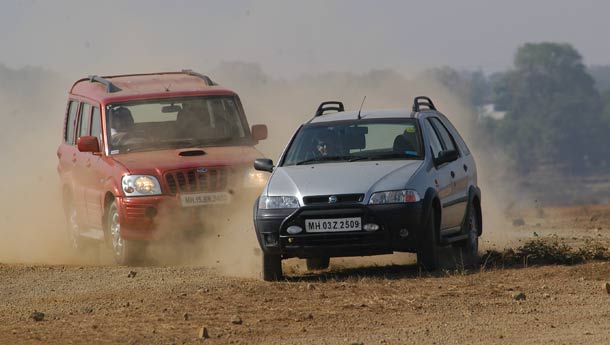 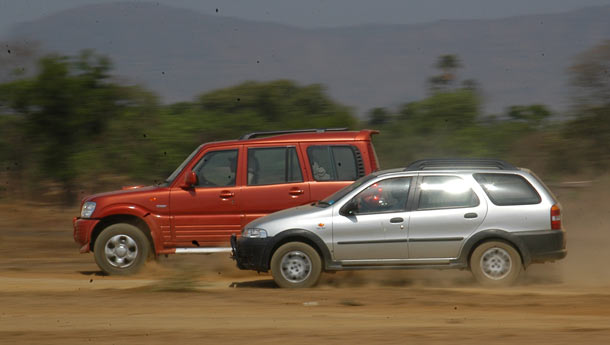 Edmund Hillary was the first guy to climb Mount Everest. I guess you already know that. But many of you may not know why he did it. Actually it was a journalist who asked him that profound question. To which his even more profound reply was ‘because it is there’. And that is pretty much my rationale for the slightly different test here.

So, in the silver corner we have the Fiat Adventure. A car that always made a lot of sense to people with great taste – motoring journalists, that is – and now shouldering the responsibility of getting a company back on track. In the red corner, the Mahindra Scorpio. The only proper affordable SUV that now boasts of 43 changes. What do they have in common? Well, nothing much apart from the fact that both these vehicles can go off-road er… slightly.

Which is exactly what we did. Took them off-road er…slightly. Or essentially timed them over a surface that Colin McRae in his Focus would have gone bonkers on. But hang on a minute. The way these cars are built also make this test a rather interesting one. One drinks petrol, the other diesel. One is powered and steered by the same set of wheels. The other gets its rear sets to do its propulsion. If you think about it, this duel really has the makings of a classic. Petrol vs Diesel and Car vs SUV. FWD vs RWD. Place your bets now!

The track for the day was pretty simple. A 300-metre loop done over two laps on so much loose gravel, going sideways wasn’t an option. It was the only way, er, forward. First up on the playground – the Fiat Adventure.

Now the Adventure comes with enough visual clout for you to drive it out of a showroom and arrive at a gravel stage of the INRC championship. From the big bull bar upfront, to the twin roof-rails, the plastic cladding, the twin running boards and the City Pirellis, it looks like it munches on grit for breakfast and shingles for lunch. Then there are the fog lamps. Or should I say, sets of foglamps, which means it can stick to its diet even for dinner.

There is also the equipment. The 1600cc petrol engine that’s such a delight in the Palio is just about adequate to have fun in the station wagon. But the 100 bhp that’s on offer comes in at a rather high 5500 rpm and that means the Adventure has to be kept on the boil, if progress has to be made. Yet, despite the relatively small engine and higher weight you’ve got to back the Adventure in this. Because at the end of the day, this is a car, and as a rule cars always go faster around corners than SUVs.

Right then. Air-conditioning off, windows up, revs up… and we are off. Sort off. You see, the minute you dump the clutch on the Adventure, the tyres spin like a washing machine on its dry cycle, shifting all the earth under them without really taking the car ahead. Once on its way the Adventure’s problems only get bigger and bigger. Not surprisingly they are all related to the tyres.   Anyway, off the line and into the first corner, the laws of physics surface in the form of understeer. But a handful of handbrake gets the Adventure back in line. Next up is a small chicane followed by a switchback and that means getting the Adventure up to speed again and then throwing in the anchors as hard as you can. All through which the Adventure copes brilliantly but is let down completely by its tyres. Turning through the hairpin brings even more understeer and soon getting the Adventure around these corners proves to be an exercise in patience with the tyres not helping one bit. Done with the first switchback, it’s time for the next one which is slightly longer and fast enough to get the back end hanging out. After which it’s a dash to the starting point followed by a quick turnaround with more of the same, at the end of which it checks in at 1:17:542 seconds.

All through the run, the Adventure is well under control with minimal body roll, but the tyres are its biggest letdown. So even though the motor revs up quickly, getting the power down proves to be the major issue. The Pirellis are as desperate for grip as a thirty-year old who’s never been past second base would be for a date. We are certain that a grippier set would have taken at least five seconds off its timing.

Next up – the Mahindra Scorpio, or should we say the ‘all-new’ Scorpio. Now the Scorpio does come with four-wheel drive as an option, but it isn’t on our test vehicle. What it did have though was the butter smooth 2609cc 115 bhp common-rail motor. And 27.8 kgm of torque to go with it. Now the Scorpio looks the more capable of the two here to take on this surface. But it can go around corners in the same way Italians can be punctual.  Either way this is a rather tight track and with two proper switchbacks, it isn’t going to be easy for the Scorpio. But I wouldn’t be counting my money just yet if I were you.

Off the line, the Scorpio gets moving instantly and with so much torque available at so little revs, quick shifting into second provides the best traction. Up to speed and almost immediately braking for the first corner means the Scorpio is now pitching like the HMS Invincible in rough seas. Yet, rear wheel drive means getting around the corner is a matter of turning in, getting on the throttle and then applying opposite lock on your way out. However, with the Scorpio’s slightly vague steering, it’s a matter of applying a series of opposite locks as you enter the chicane. The right amount of throttle and steering helps the Scorpio tiptoe through the switchback and by the end of the second hairpin, the SUV is all over the place. Coming in through the start-finish straight and out for another lap, the Scorpio feels so precarious, it would have made a sailor sick. But as it crosses the finish line, the clock stops at 1:16:782. A whole second quicker than the Adventure. And you thought cars were always faster.

Okay, we are going to grant this one to the Scorpio, but the Adventure would have won this one on better tyres. Yet this isn’t Formula One and so we aren’t going to make excuses here. Stopwatches don’t lie you know, so say hello to the ‘new Gravel King’, the Mahindra Scorpio.

PS: Despite the victory, this road tester was seen haggling for the Adventure’s keys on the way home. He said he didn’t want to get sick from his own driving.