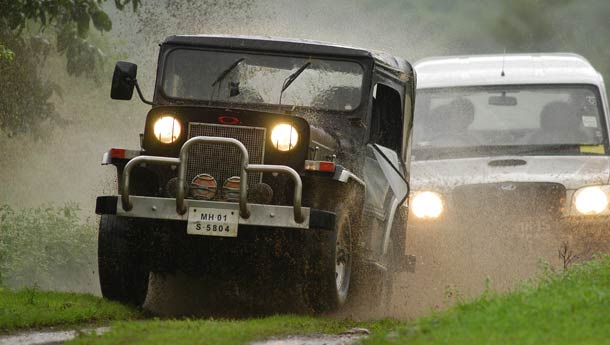 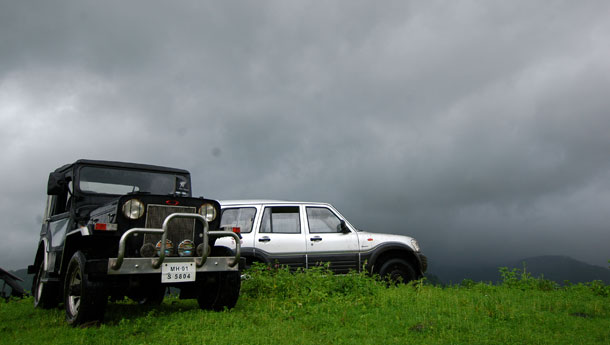 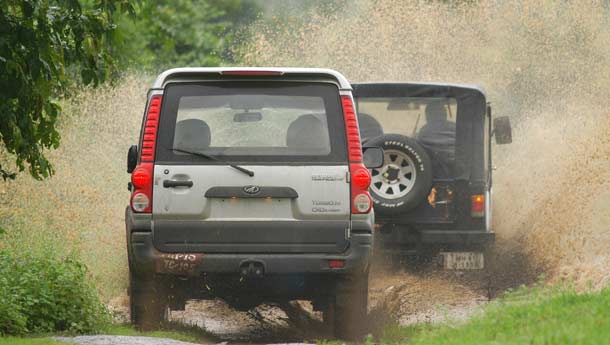 All right, I admit it. I don’t like off-roaders. I know, I know, it’s possibly the wrongest possible thing to say in a magazine that screams ‘We’ve gone mud’ on the cover, but I just don’t get vehicles that are taller than me. You could drive a Hummer to the top of Mount Everest and then to the moon but I would rather take an Alto down NH17 any day. And my ideal day off-roading would be to drive a Miata around a track so hard that you begin using all the kerbs.

So, while the rest of the BSM gang came up with all sorts of ideas for a lead shot – ‘Pablo let’s do a tandem track’, ‘No a tandem pan’, ‘No, no, a parallel tandem track’, I wanted a still ‘mood’ shot. Anyway, as you can see, my suggestion was like the other guy from Wham! - that is, it just didn’t matter. Anyway, the next thing I knew was I was driving the Classic behind Srini in the four-wheel drive Scorpio through what appeared to be a small pond. Or was it a river?

Now I know I should have been flooring it (‘You should get in and get out even before the mud realises what’s happening’ – thanks, Srini). I know I should have engaged four high (or is that four low?) – still I close my eyes and drive through with just about a toe on throttle. And yet, after those zillion water droplets have become a lake again, it’s Srini who’s got the Scorpio almost on its side and is waving the white flag. As for me, well I have just stalled, but at least I am on dry land. Inexperience and fear just triumphed over er...thoughtful advice. Or at least that’s what it looked like.

But as Jeep purists would know, it wasn’t inexperience or fear that worked, at least not in the form of the Classic. Because fording rivers is what the Classic CJ 350 was built for. That too with the entire gamut of a Gatling gun, and injured soldiers in tow. Okay, so it didn’t really wear the Mahindra badge back then, but behind that smallish two-spoke steering wheel it’s pretty much the same machine. Sure, most of you do know what CJ stands for, but for the generation that lists PS2 as their favourite sport (In other words, yours?- Shumi), here’s a quick history lesson.   Once the quintessential World War II Jeep, after the Willys had finished with the war and done the victory dance, the manufacturers decided to build Civilian versions of it. Essentially, remove the guns and install proper windscreens instead. Meanwhile two Indian gents, KC and JC Mahindra, decided that the Willys wouldn’t do too badly back home. The roads were perfect for what the Jeep was designed for and the CJ3B variant would be ideal for our armed forces, policemen, and of course, civilians. The plan worked to the tee and guess what, fifty years later Mahindra, is building the country’s only affordable SUV. The Classic on the other hand is no longer made but remember, this is the vehicle that made an automobile giant out of traders.

Anyway, back at the river, Srini with considerable help from the rest (‘Get out even before the mud realises it’)  had managed to bring the Scorpio back on all four wheels again and was marvelling at the wonders of four wheel traction. I on the other hand had just had a crash course in what a real four-wheel drive could do in a machine that first appeared on the drawing board in 1944.

Now, there is something fundamentally wrong about a clean SUV and with Pablo in a mood to get some awesome frames, it was pretty clear that we would be rearranging the countryside for the rest of the afternoon. The Classic too was living up to its name and as long as it made me look good, I didn’t mind. But the effort it took to drive it was giving my daily workout a complex. The car is as every bit as butch to drive as it is to look at. Forget heavy clutches and steering, you need to have had a wholesome breakfast just to switch on the head lamps.

Sit inside and it’s like driving around in a kennel. The flat windscreen is so close, you don’t see through it, you wear it. It really is such a time warp car that not finding fifth gear isn’t a surprise. There’s even a row of fifteen(!) warning lights on the dash that resemble a control room from a seventies Hindi spy flick. There really is very little car around you and even less behind you. Then there is the noise that’s so typically Jeep and there isn’t too much following it. Quite simply, any sort of detail that you would think is modern isn’t on this car. It even has leaf springs all around.   However, when the going gets tough, the Classic with its 2112cc, 62 bhp motor is perfectly equipped to do the ‘tough get going’ bit. It’s slow, but once you move the necessary levers and get it in four-low (or is it four-high?) it’s every bit as sure. It’s a real gecko, this Classic, and the best thing about it is that you don’t really need to know what you are doing to get through the muck.

A quick stop to shoot some stills (hush, finally) gives me a chance to switch cars. Now, perception can be a funny thing and getting into the Scorpio was a bit like moving from a dumpy bed and breakfast into the Waldorf Astoria. There’s doors, air-conditioning, power-steering, windows... things that you should be taking for granted on an automobile suddenly appear to be luxuries that you don’t want to let go. Where the Classic is barbaric, the Scorpio gives you a sense of genteel sophistication.

It’s a bit less reassuring than the Classic, though. Where you can actually feel the gears mesh when you engage all-wheel drive on the Classic, in the Scorpio you simply turn a switch and a green light on the dash lights up. In terms of sheer muscle though, the Scorpio towers over the Classic. The 2609cc, 115 bhp motor isn’t just adequate, its necessary too. Remember, the Scorpio weighs in at nearly two tons while the Classic is about half that. But fifteen minutes later through Maharashtra’s back yard you understand the importance of hydraulic oil running through the pumps. And that pumped muscles don’t have to be as big a part of off-roading as locking differentials.

But having driven the two generations of home grown off-roaders back to back on the slushiest of er...slushes, it was amazing how differently they went about their business. It’s a bit like the Godfather. The Classic is the Don. The one who believes in going about things carefully, as if it were trying to ‘reason with the terrain’ to let it through. The Scorpio on the other hand is like the Don’s first son, Sonny – the one who hits first and talks later. You do get the job done but you won’t be winning any friends along the way. Most of the time the 21 kgm of torque will pull you through the worst of terrain. But that very same torque gives you a sense of confidence that will make you try things out of your reach and get you in trouble.

One thing that did come through after an entire day in the wilds was the bloodline. While both these Mahindras might appear a bit slow-witted on the road, off it, they thrive on a diet of rocks, stones and absolutely anything that you throw at them. But just like Mr Puzo’s thrillers, its the Don that really enjoys a following – and quite rightly too.