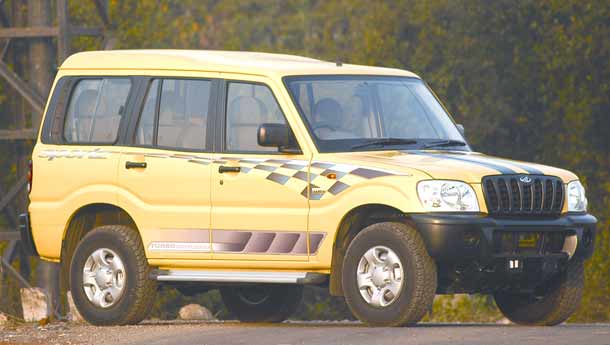 What do you do to freshen up a two-year old SUV? Painting it yellow is a... er, very bright idea and Mahindra has done just that. Add some natty graphics, you say? Yup, Mahindra has done that too. How about new fabrics? Hooray, Mahindra! These Mahindra guys are pretty smart, they have stitched up a new interior too. By now you are convinced that you are ready to drive a Scorpio, grow chest hair in the process and forget that slick sedan your wife and kids want you to buy. Brilliant. But you are yet to hear the best bit – they have plonked in a new variant of the turbodiesel, this time wearing the magic words ‘common rail direct injection.’ Yes, now you can stare down at that sedan and race it at the next stoplight too.


Alright, don’t get too excited. To begin with, the new Scorpio, even the Sportz version with racing stripes, is not meant for the friendly neighbourhood drag strip. The CRDe (registered trade mark for common-rail engines from Mahindra, like CDI of Mercedes-Benz and CRDi of Hyundai) unit was necessary for Mahindra to meet the upcoming BSIII emission norms. Equipped with a new fuel-feeding system, the Scorpio can now ply in big metros. Just to put it on record, the non-CRDe engine from the Mahindra NEF (New Engine Family) will continue to be available in other parts of the country. And the Sportz version which you see in these pages is part of a 500-strong limited edition fleet. Mahindra will continue to build the Sportz if there is enough demand. Other changes to the machine include larger wheels and bigger brakes.

The engine when fired up one cold February morning sounded eerily stable – no shudder and jolt typical of diesels. Now, that doesn’t mean that there was pindrop silence in the cabin either, after all, it is the sticky fuel that goes into the engine. On the move, a few rough edges of the original Direct Injection engine seem to be ironed out and the torque spread is that much more smoother, making gear change transitions almost seamless.

The new engine develops 6 bhp more (115 bhp as against 109 bhp) at 3800 rpm and 28.3 kgm of torque (as against 26 kgm) between 1700 and 2200 rpm. A revised gearbox coded NGT 530 (New Generation Transmission, what else) does a good job of sending power to the rear wheels. As in the past, you can always order your Scorpio with the Borg Warner Electric 4WD system.
As you would expect, the performance is not dramatically better, but our test car (brand new... no time to run her in!) returned a healthy 0-60 kph in 6.13 seconds and touched 100 kph in 17 seconds. Not bad, since the old DI engine took almost seven seconds for the shorter sprint and all of 21.23 seconds for the 100 kph run.

What the numbers won’t tell you is how much more refined the car has become. We didn’t have time to evaluate the fuel consumption runs, but according to Mahindra, the car should return 12 kpl if driven carefully. The Scorpio remains the only good looking choice to most SUV enthusiasts, with CR-Vs and Endeavours costing well above Rs 12 lakh. If we can trust our sources, an even more powerful variant of the common-rail motor is on the anvil. Now that will be a good reason to paint the town yellow, right?

I was hoping the CRDe hardware would completely blow me away, given that the DI Scorpio was gutsy enough. But you really need to have a dynamometer up your bottom to spot the 6 bhp jump in power because the difference really isn’t that evident. Okay, so the torque is as well spread as a nicely buttered slice of bread, and there is a marked  improvement in refinement. So for now, look at the CRDe upgrade more as a necessity in light of the pollution norms and consider the extra boost in power and torque as a bonus along the way.  As for the rest of the car, the steering continues to be as vague as... the earlier Scorpio. Bigger brakes do work better than before, but I am sure they could do with a bit more fine tuning. And while I am on a complain spree, let me also add that you still have to tiptoe your way around corners. But to Mahindra’s credit, the Scorpio is still the only truly affordable SUV and I just hope they use the CRDe potential to the fullest on the next version. Maybe they won’t have to spell Sports with a Z then.