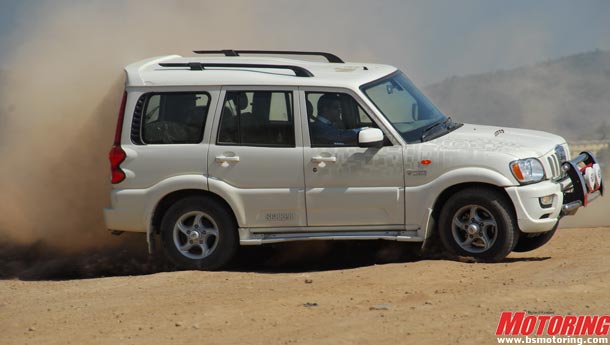 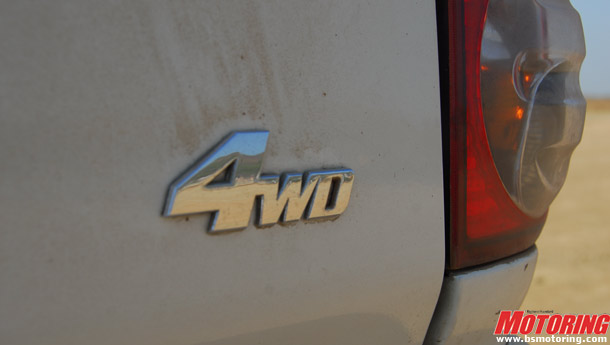 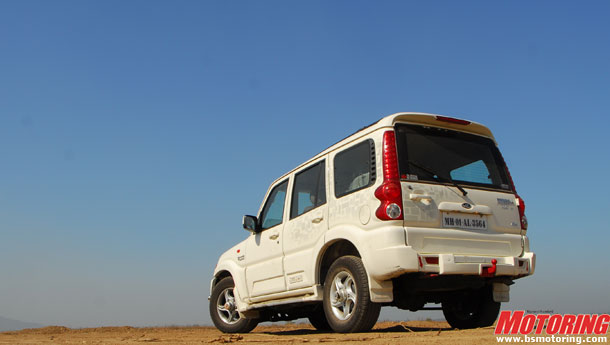 Isaac Newton wrote a theory and they say the rest is history. How the falling of an apple could have rippling effects on the way we lead our lives is staggering to say the least. But then gravity as a theory and in practice has been used, misused and abused in ways that would make Newton cringe if he were still alive. Of course, the best part is when you find yourself countering gravity for those few moments – when you feel one with the atmosphere and bang! you land hard on your feet. Or in the case of the Scorpio, 16-inch footwear on all four corners.

It must have been just a fraction, when the Scorpio found elevation, but a badly judged ridge meant the front bumper on one side kissed mother earth rather hard. I should have enjoyed that moment but worried about the landing which was a series of thuds and crashes. As it came to a halt, my heart started to beat faster and somehow found the courage. The front bumper had suffered a deep gash and had come off its clips on one side. I feared the worst and believed that the car wouldn't be driveable after this and something from the undercarriage had worked itself loose. But none of that happened and we could drive it back to the Mahindra office without any trouble.   That the Scorpio is a pitbull on the road is something I never doubted, but that it would survive a mid-flight scare and still go on is something I least expected. Well, the mHawk now has a reason to scare you silly. It's got a four-wheel drive system that somehow was missing from the Scorpio lineup for a while. The erstwhile Scorpio 4x4 was based on the original 2609cc turbocharged diesel that first featured in the SUV. Using a Borg & Warner transfer case, the then Scorpio 4wd somehow was reserved for the few who knew the right contacts at M&M and could source one. But now, Mahindra believes that anyone who wants a four-wheel drive Scorpio should be able to buy it off the shelf. So in comes the mHawk 4wd, and since Mahindra had retired the 2.6-litre, even in common rail guise the 4wd was rather critical to its lineup.

For starters, the four-wheel drive transfer case is the same Borg & Warner unit with the now familiar mixer grinder knob for three settings – 2 H, 4H and 4 L. M&M somehow still haven't found a way of mating independent front suspension to its four-wheel drive system. It was the same with the Bolero and the erstwhile Scorpio and it continues here too. so you get a double-wishbone torsion bar up front with a coil spring setup at the rear. Kerb weight is up by 100 kg on the mHawk, though it is still a bit lighter than the previous iteration. Mahindra says that the approach and departure angles are 30 and 20 degrees respectively, and maybe I should have read it a bit more closely before making an attempt at flight.

There is no immediate difference visible on the move, except that it probably feels a bit lethargic at lower revs due to the added weight and the crawler like ratio in first gear. At higher speeds it settles into a rhythm rather nicely. Since the 4wd is based on the VLX, you get all the creature comforts too, with airbags now as an optional feature. Behind the wheel, the Scorpio enjoys a commanding, blind-spot free view of the road which helps even when you are off-road.   Somehow, when the Scorpio takes on the elements it has a kind of verve and spring in its step that seems to be lacking on-road. Because of the lower weight of the mHawk engine, the steering has a bit more feel and that makes it easier off-road when you want to know if the surface under you will give away or stay firm. Despite the changed suspension setup, the ride quality has the same sort of springiness the regular Scorpio comes packaged with. Maybe it's a tad more, though somehow it seems to disappear when driven hard on bad roads.

And sometimes those bad roads give you an opportunity to put two wheels in the air and get involved with an imaginary argument with Newton. With 29 kgm of twist from its 2.2-litre engine, the Scorpio literally ploughs through mud banks and mounds of sand. Engage four-high and with torque being evenly split between the front and the rear axles, the Scorpio becomes a lot of fun. Disengage it on a flat open surface like our mini-Rann you see in the pictures and you can go sideways all day. Though you do need to build up some momentum, it is a lot of fun and provoke it some more and raising two wheels on the farther side isn't difficult, though at no point do you feel would it topple over.

At the end of it all, you have to ask if the additional amount of Rs 68 k for the manual and Rs 98 k for the automatic 4wds makes sense for the off-road enthusiast? In a way it does, since the Scorpio even in this guise is capable of going through most off-road trails, while providing you with decent on-road ability and creature comforts. But if you want a Mahindra that does all that and can do some serious wheel articulation tricks and tackle some even tougher terrain, then I suggest writing to Anand Mahindra – no wait a minute, doing a signature campaign and clammer for the export-only Thar. Maybe, it will call for the laws of gravity being re-written all over again!